Pros and Cons of different Programs

I’m anxiously awaiting my X-Carve, which should arrive in 2 days. I’ve been stalking the forums and have seen a lot of different programs listed, and was wondering if you users with more experience could post a pro/con/price list for the various programs you use, as well as how easy they are to use compared to Easel.

I’m especially interested in the relative CAD/programming experience levels needed. I’ve never played with GRBL or Arduinos before, so if a program requires programming them it would be difficult for me.

I’m also curious on how often most GWizard users actually use GWizard . If I was to use the trial and get values for the most common cuts, would it be worth purchasing the program itself?

I’ve tried a few CAD/CAM programs including Fusion360, Solidworks, Blender on the CAD side; and MeshCAM, HSMXpress (for solidworks), SprutCAM, MasterCAM, Fusion360 Built-in CAM and of course Easel.

I do all my modeling in Solidworks. Fusion360 is just as good, IMO but because the program lives in the cloud it is limited in “meta” features (like directly importing DXF’s into an existing project). Blender is more of a 3D modeling program for game devs, animation devs, or 3D printing. I think Solidworks is the best option. Definitely not cheap but I think I’m right in saying its the best CAD program out there. You can also get HSMXpress for Solidworks, a free addon that does 2.5D CAM.

MeshCAM was a god-send the first week or 2 of CAM experimentation. Easy to use and it does 3D milling no problem. It doesn’t have the millions of options the other CAM programs have, and really boils it down to the essential parameters (WOC, DOC, feedrate, etc).

SprutCAM and MasterCAM are massively complicated. I’m convinced that both of them are the most powerful CAM programs out there, but that comes at the cost of complexity and a very steep learning curve.

Fusion360’s CAM is a more advanced version of HSMXpress/HSMWorks with nice features like insert-able tabs.

As for feed calculators; I use GWizard primarily and confirm final feed rates in HSMAdvisor as well. I don’t use it for every time I want to do some CAM. With Solidworks + HSMXpress I use the tool library as a sort of feedrate database. I will create my tool I want (say, a 1/8" 2flute square) and apply the feedrates I would use for an aluminum roughing pass. Then make another tool that’s a clone of the previous one, except change the parameters for a finishing pass. When you have new stuff to cut this can save a ton of time cross referencing between GWizard and HSMAdvisor.

I have tried Fusion 360 and meshcam and just recently started using Vcarve desktop. I like F360, it is capable of doing just about anything you can ever imagine, but it has a really steep learning curve (at least for me). Meshcam is super easy to use but does not offer a lot of options.

I have been very impressed with Vcarve, it really provides a lot of powerful tools in a way that makes it easy to learn and use. It can do really excellent lettering using Vbits so making any type of sign is easy. It also provides tons of vector tools for creating/editing drawings. It can import jpg files and vectorize them, it also includes a huge clipart library of 2D and 3D images.

At $350 for Vcarve Desktop, I was not sure I wanted to spend the money, but after buying it I am very happy I did.

Here is my first 3D (technically 2.5D) carving try with it.

Here is the model in Vcarve 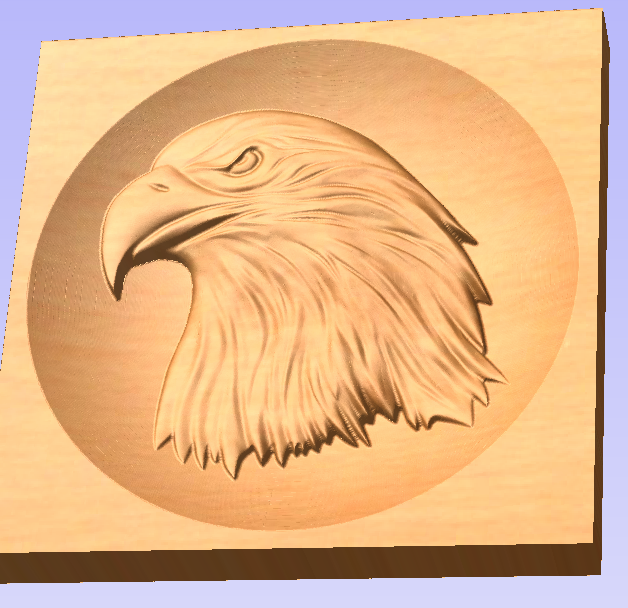 Here is my first attempt at carving the eagle, using a .25" roughing bit for the rough pass and a .125" ball nose for the detail pass. 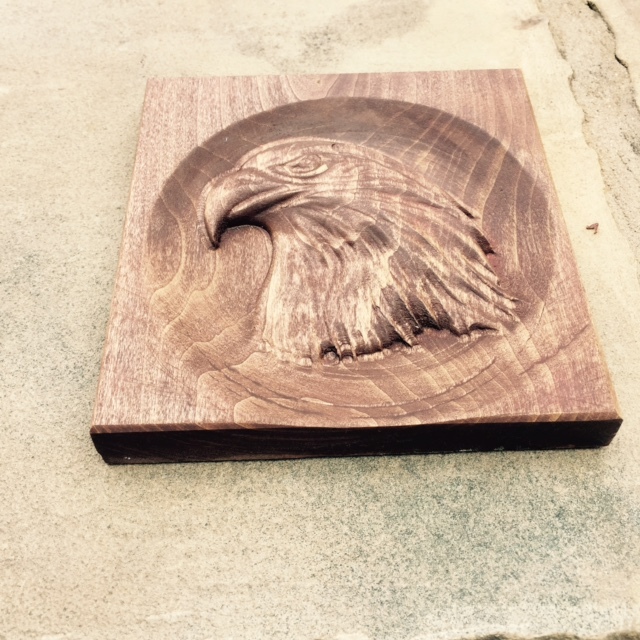 First, let me say that I don’t have anywhere near the experience of some of the folks. I got my Shapeoko 2 kit in February and have been through several of the free software options, all of which work well to some degree. Lately, I’ve been working with the trial versions of the Vectric software packages Cut2D and VCarve Desktop. While I’ve been trying to avoid spending much on software, I’m getting ready to pull the trigger on VCarve Desktop. It provides complete CAD and CAM and is straightforward to learn, in part because of great video tutorials.

I’m just going to mention our free program Easel here, since no one has yet. It’s free, and you can do a lot with it. Plus, we have some super secret features we’ll be rolling out over the next few weeks that might give these expensive CAD/CAM packages a run for their money

As much as I like Easel for it’s ease of use, the toolpathing for text, particularly, is absolutely awful for efficiency. And the lack of 2.5/3D capability is really crippling for this kind of thing.

On the flipside, it is probably the single easiest-to-use CAD/CAM I’ve ever seen, within its limited scope. It is awesomely easy to use, and if you don’t mind the sharp limitations on its capability and the tons of extra time in Z-moves and rapids, it will give you a reliably good result. Also, being free is a very major mark in its favour!

Sure, now that I have bought one of those expensive packages you are going to make Easel even better.

Easel is nice software, It does a really good job of simplifying the process of designing projects and creating toolpaths.

i like easel for how simple it is but the cut times can be crazy the last project i cut in easel took almost 4 hours to cut. i then put it through fusion 360 and UGS it took 45 mins. If your trying to do anything production or want to do production. you need something better than easel. So i guess my point is easel is good for playing around but its new and still has some growing up to do.

Depends on when you tried Easel.

I just saw some new updates get pushed.

I’ve been doing a lot of playing around with Easel, and am looking forward to using it for a lot of stuff.

I’m just going to mention our free program Easel here, since no one has yet. It’s free, and you can do a lot with it. Plus, we have some super secret features we’ll be rolling out over the next few weeks that might give these expensive CAD/CAM packages a run for their money

My comments were not meant to put down Easel. I’ve used it for a few things and it did well. However, I’ve done some v-carving and plan more, along with some combinations of drawing elements that I find much easier in Vectric VCarve. I’ve dug in my heels about spending any money on software because of the free stuff that’s available, BUT…I pulled the trigger today on a license for VCarve Desktop.

I felt the same way about spending any more money, but I am really happy with Vcarve desktop, It is like getting a brand new machine with all the options it opens up. Now get ready to buy more bits.

I’ve actually been looking fairly seriously at V-Carve Desktop as well… I have MeshCAM, but it doesn’t support v-carving at all. Great for milling solid objects from STL files, but not really for making signs, etc.

How well does V-Carve actually perform with GRBL / X-Carve?

i have a copy of aspire and have played around with the v carving a bit and it works pretty good. i would recommend vectric products if you can afford them. the 3d preview is awesome

So far I am very impressed with V-Carve. The user interface is easy to use while still being powerful enough to do really complex projects. It is also very easy to create toolpaths for Vcarving, 3D objects, pockets and profiles.

The gcode created with the X-Carve post processors is very solid, I have not had any problem using the gcode generated by Vcarve.

The best part about using VCarve is just how efficient the tool paths it creates are. Before I purchased VCarve I used Easel for everything I did and I was pretty happy with it. It got the job done. Of course I noticed that the toolpath Easel created was wildly inefficient. I know that Easel is getting better and with the new depth first upgrades they are rolling out it is getting much faster.

The first thing I did with Vcarve was a sign with about 20 letters. I was able to create the sign in about 5 minutes, create the toolpath as a vcarve in less than a minute and then cut the letters in about 3 minutes. On Easel it would have taken well over an hour to cut. It really is like getting a new machine the first time you watch a 90 degree vbit expertly carve letters at blinding speed. It is just amazing to see how it first carves the main vectors of the letter, then goes back and quickly shapes the sides. The Z axis never stops moving as the bit moves around each letter.

Hmm, it sounds like it might indeed be worth my money, then. I’ve been reading a bit, and it looks like it’s pretty well-liked. My biggest problem right now is trying to cut lines fine enough to put a useful logo along with text on a sign. I’d enjoy being a bit more efficient with my toolpaths, for sure, but since I’m doing this at a hobbyist level, it’s not that big of a deal. Being able to shape text around a 3D object sure seems like it would open up some whole new vistas in design, too!

Is designing your sign or whatnot as simple as it is in Easel? It looks to be fairly straight-forward in their examples, anyway.

Design in VCarve is about as simple as it can be. If you are just putting text on a sign it is super simple, even doing things like curving text along an arc or doing fine space adjustments between letters is very easy.

If you watch a few of the excellent tutorial videos you will be able to design just about anything you want in under an hour.

The only thing you cannot design is 3D contours, so if you want to do that you would still need to use a full 3D package like Fusion360. Even then you can import the STL file into Vcarve to easily create the toolpath.

As for being able to to do very fine lines a good vbit can do amazing detail work. If you have really fine lines I would recommend getting a 30 degree vbit.

download the trial version of the software. it lets you do everything except save gcode

The trial version will let you save gcode for tutorial projects.

Yes thats true. I meant on projects you create from scratch.