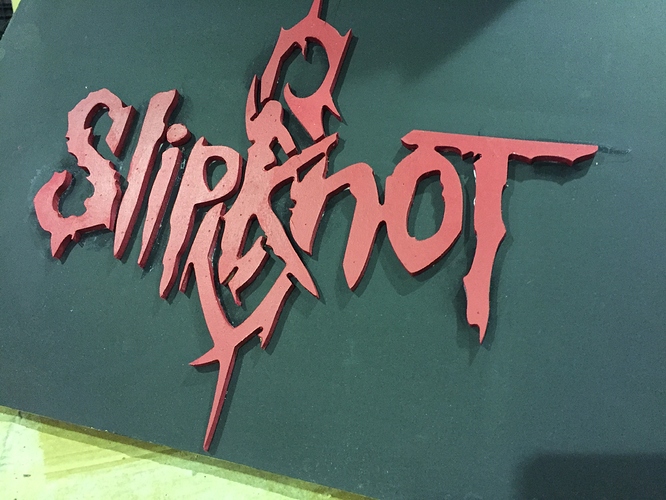 Cut from 6mm mdf, then glued and pinned onto 12mm mdf and painted.

Easel automatically added tabs to this design but it’s position of tabs seem odd with some areas needing tabs but not having them and other areas having lots of tabs. I may redo the sign but play around with tab positions if I can.

Yes, you can move the tab positions in Easel, as well as change the number of them.

If you ever get a chance to see a live performance, DO IT. They put on a great show with a lot of entertaining stage performances. They don’t just get up there and sing and play instruments. They add a lot of Flare and entertainment to their shows. I have seen them Perform live Twice and would do it again in a heartbeat. I enjoy their music and like I said they put on one heck of an entertaining show. I have been to hundreds of Live Concerts and the two of SlipKnots are easily both in my top 10 performances.

For instance one of the shows that I was at had Huge Drums that they beat with pipes and Baseball bats. Not only did they play the drums with these but they juggled them and threw them off and on the stage, and they even dropped them from the rafters to use. Needless to say, there were Bats and Pipes flying all over that stage.

They add a lot of Showmanship to every performance.

If you enjoyed Rob Zombie and Godsmack, then you will probably enjoy Slipknot. All of them are great showmen that put a lot into their performances.

I witnessed the Drum off that you are talking about at Rocklahoma a few years back and was fortunate enough to catch one of Sully’s drumsticks from the performance. Awesome!!!

ive been to too many gigs and festivals over the years, my favorite bands are slipknot, machine head, disturbed but the best live show i have ever seen has to Rammstien, absolutely unreal.
Saw Disturbed, avenged sevenfold and inflames the other day in London

Think ill make a few more band logos if i get time this weekend.

Been wanting to see Rammstein.

aw me too. seen some videos of them but not live. This past summer we spent $50 a person and got to see 3 shows. first was Breaking Benjamin and Disturbed (we ended up missing this one because my wife got kidney stones). Then the second was Manson and Slipnot. The third was In this Moment, Zombie and Korn.
Favorite show of all time was 15 years ago Manson… sadly this latest show was pretty much the same but scaled down and he didn’t seem like he was into it anymore.

Why, because you like a different genre of Music than us? That doesn’t show a sign of age. Everyone has their own preference of what they determine to be “Entertainment”.

Why, because you like a different genre of Music than us?

No - because I don’t know some of these bands!

Well that’s possibly bc you have a different taste in music.

Which isn’t a bad thing.

Kidney Stones will ruin your day and your plans. I have been graced with them 23 times so far in my life…

We all agree that was the best, right guys?

@JDM you have it all wrong, mate!

Best metal show ever was probably Pantera’s last visit to Rockefeller Hall Oslo. I guess that would be late year 2000 or so. They totally kicked ■■■! The day after was no fun, I can tell you that!

I e always told myself my first live band will be 21 pilots. However they seem to be allergic to Canada. Something about the freezing cold and snow I think.

They TOTALLY kicked ■■■ in Oslo not so long ago! Great night out - guaranteed!