The machine is able to keep up, my router sounds happy, and my edge finish is good. However, I’m getting these gnarly long wood shavings that are really messing with my dust collection, especially when cutting with the grain: 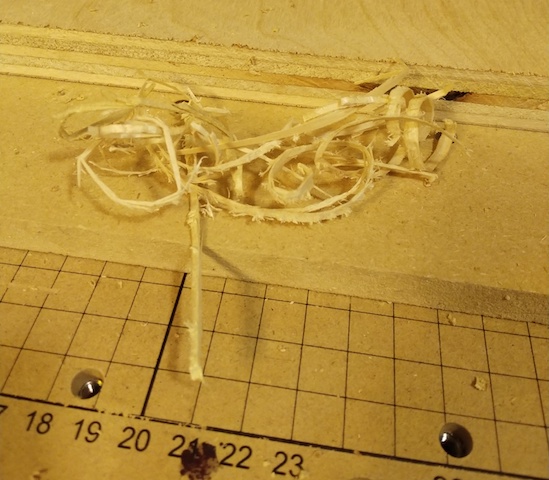 This is probably readily obvious to somebody who is actually a woodworker, but I’m wondering if this is an issue? Is it indicative of too high feeds or speeds? Or too low speeds?

Fiddling with the router speed knob a little bit doesn’t seem to have made much of a difference. Tried searching for this, but either nobody else has this going, or I don’t seem to have the right words to describe it.

a down cut bit will eliminate that completely.

It is a downcut bit

Do the long strands happen in all layers of the veneer? I.e, if you are routing with/parallel to the grain you may develop long stands where as if you were routing perpendicular to the grain, it would chip out and produce smaller shavings.

Plywood having having offset layers of the veneer has both grain directions.

Do the long strands happen in all layers of the veneer? I.e, if you are routing with/parallel to the grain you may develop long stands where as if you were routing perpendicular to the grain, it would chip out and produce smaller shavings.

The strands generally happen in a few of the layers, and they generally only start when the machine is running parallel to the grain.

I’m routing some pretty large curved pockets, and once one of the strands starts, it seems to go on for quite a while, following the curve of the pocket.

Pretty sure everything is square and tram, I checked fairly recently. Either way though I’m curious, how would being out of tram cause long wood shavings? Trying to figure out what the mechanism is.

In the picture, it looks like you are routing the contour of the plywood? I suspect the bit, not matter if it is a down cut/straight or upcut, the veneers that are oriented with your tool path have no chance to to be ground up by the bit. The long stands are just being pushed off to the side.

Someone who is more familiar to CNC work may have a better opinion. I am just trying to remember my experiences with hand routing plywood.

A slower IPM and using a straight bit may help. Its all about directing the long strands back into the bit.

Could also change your milling technique. Conventional vs climb

@AndrewKarl Thanks for the insights!

I tried to switch to climb milling, but I had to stop because it was really hard on the machine. That said, what you said about directing the strands back into the bit got me thinking. I switched from a conventional pocketing strategy to a morphed spiral: 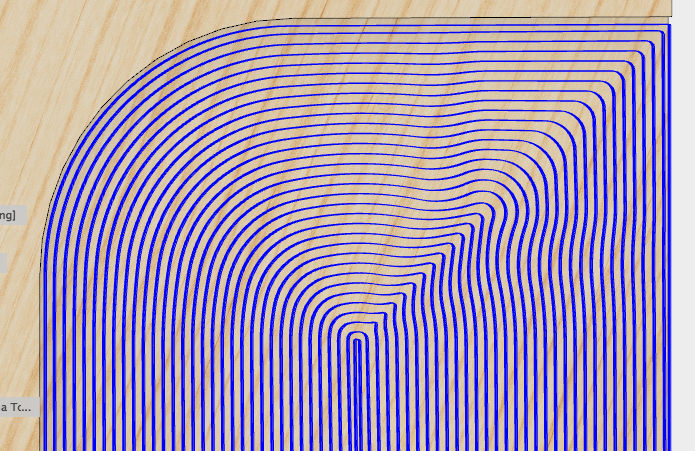 It takes about 25% longer, but the spiral moves of the tool are cutting off the strands and I’m getting a smooth run. Thanks a ton

You could try a compression bit, it’s an upcut at the tip with downcut on the other end. Keeps plys from splintering on the outer skins. Probably make mince meat out of those strands too! https://www.amanatool.com/46170-cnc-solid-carbide-compression-spiral-1-4-dia-x-7-8-x-1-4-inch-shank.html?ff=1&fp=8717

Guess it’s time to order a new one.