When manually inputting the bit size it would be great if the changing between in and mm was a toggle feature, like when changing the general units. I found that using a 1,2 mm bit suddenly became a 1.2 in bit - resulting in a not-so-great cut 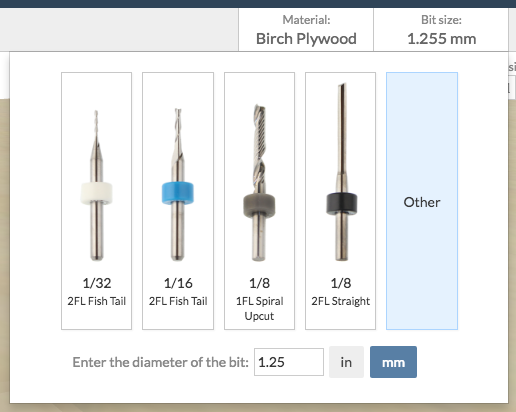 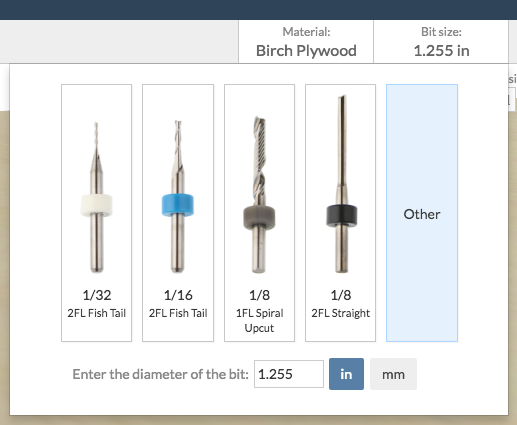 If a recalculation of the size could happen automatically when toggling between units it could avoid some easy mistakes.

How did you add additional bits to Easel? In your photos?

I think it might have to do with the choice of machine… I’m running Easel with a Carvey. I see the selection of bits are different i.e. for an X-Carve

That’s a good point Phil. I’m rather new to CNC so I haven’t lost my trust to the system yet.

Next step: Measure the true size of all my bits.

Regardless, it would still be nice with the the option to toggle between inches and mm (w/ 3 decimals) and automatically recalculate, instead of just changing the units.

What do you mean by recalculate?

I mention this only from a UX perspective. I’m aware that you change your general units in the lower left corner and that it is nice that you are able to input your bit size in both inches and mm. Maybe I’m using the wrong word here… It’s not looking to “recalculate” the bit size in some complicated way but only to convert the units when toggling between the two units. If you type in a 3mm bit and afterwards change the units to inches then - from a usability point of view - the bit size should not suddenly be 3 inches… If the input value is not converted you are actually not changing units… You are changing the bit size when you click the unit-selector. AND this can result in unintended changes in the cut that you may not notice before it is too late.

So. I’m not arguing against having the option to input the bit size in both mm and inches regardless of the setting of the general units. I’m pointing out that the design of the current interface with the unit selector in the bit definition may have some unintended consequences

No the problem actually only exists when choosing “other bit sizes”. I don’t recall being able to change the size of the predetermined bits.

Not sure what you mean by that. Easel is a great program and only getting better… some bugs to work out, but I trust it.

I can only second that. I love the simplicity of Easel and its gotten much better even in the short period I have been using it, so that is good.

Typically, if you have typed in something in one unit and then change the unit, the displayed numbers should change to match the new unit and same thing when switching back. Changing the unit should not change the actual size of the bit (from the program perspective), only what is displayed.

Setting the unit to inches and typing in 3, then switching to mm, should result in 76.2 being displayed.

Setting the unit to mm and typing in 3, then switching to inches, should result in 0.118 being displayed.

The point is that the unit and the number go together, they are not two completely separate things.
If you want to do the conversion yourself that is fine, just as with the units in your designs.

Very few bits are exactly those fractions. You should be using “other” and enteringthe true measured diameter of the cutting part.

Hmmm odd. Besides some cheap Chinese bits I got on ebay, my bits have all been pretty much spot on.

If you do it your way it won’t change anything, either you set the units to what you want and then type in the number or leave the units at your default and type in the number. The reason to have this feature it is when working with different units. For example when you are using a design in inches and have to bit sized or measured in metric. If you already have the units you want you would not be switching units anyway, so what is the problem? Why should the behaviour be different just because the number and unit relate to a bit instead of a piece of the design? The only thing a user interface like that accomplishes is to annoy users. What is the point of forcing the user to convert the size manually to get the same units when the solution is easy. Why steepen the learning curve with the completely opposite behaviour compared to almost any other similar program?

Same link as for the design, there is no difference. You don’t want the program to try cutting the same path with a 3 mm tool as with a 3 inch tool.
In your case you either leave the unit as is or set it to whatever unit you use before entering the number. The only difference is IF you switch the unit after you typed in the number. If you don’t switch after entering the number it doesn’t change anything. How can this be any different from the design case? If you create a new design you set the units to whatever you want, then enter the numbers which the program should assume are in the same units you just set, if you then change the units it should recalculate so the design is the same size but displayed in different units. The measured size of bit is no different then the measured or calculated size of the part you are trying to create.
How can the logical connection between a unit and the corresponding number be different for a bit than for a hole, a pocket or whatever? Why should one measure be treated any different from another? I don’t see any logic what so ever in that.

No, that is correct, what you describe doesn’t make sense, but I don’t know where you got the idea that I want to convert it manually first and then convert it again in the program, that is exactly what I want to avoid.

What does makes sense is for the program to convert whatever value it has when/if you select a different unit. If you already have the size in the unit you want then you select the unit first and then enter the number, if you want the program to convert then you enter the number first, then switch the unit. Very simple and logical, in addition to being the usually expected behaviour and similar to other programs and even other places in the same program. Is there anything with that functionality which would cause problems with your way of doing things and in that case how/why?

Nope. I want consistency when working with units.
When i change the units of the work area it doesn’t affect the size of the design or the work area for that matter. I would like that the bit size input works the same.

So when I decide to change units of the bit, 1 inch becomes 25,4mm and if I change units to inches again it will still be 1 inch.

(Today. If I press the unit selector when it says 1in, it becomes 1mm. But I only wanted to change the units - not he size of the bit)

You are describing a different scenario where it is also possible to input the unit of the bit size in the input field. (This is how it works in most other applications and would be good feature too but that’s a different thing)

I think the issue here is that you would essentially like the program to assume that you made (or might have made) a mistake when you entered the number and therefore allow you to easily correct it.

The functionality that I (and Thomas) advocate is that the program should assume that the user knows what he is doing/is doing it right/ and that a switch of units it is deliberate, to match the units in the design for example.

For me at least, it is very uncommon to enter data in with the wrong unit set, it is however very common to switch between units for comparison and also to have design and tools in different units. The few times that I happen to enter a number with the wrong unit set I can still easily correct it by copying then number, changing the unit and pasting it back again. I do find it illogical when measures and corresponding units are treated separately as that easily leads to costly mistakes.
For example, missing orbit and hitting the planet instead… https://en.wikipedia.org/wiki/Mars_Climate_Orbiter

I don’t think anyone has advocated this feature as a correction for mistakenly converting the units before typing in the number, that is more of a strawman argument. I understand that you would like the functionality to be what you are used to and can to some extent respect that, but that doesn’t make anyone else’s argument illogical.

I didn’t mean for this to become an Android/Apple religious kind of debate. I’m only saying that the logic in Easel (only regarding the bit size) is opposite of ALL software I know when it comes to working with units - hence my request…

I rest my case…
Over and out