Repair with the same part or Upgrade?

Hello all! So I had a catastrophic domino effect happen today on my newer model x-carve. The air diffusion attachment came unscrewed on the dewalt and dropped during a job. The resulting spinning spaghetti broke the ball bearing holding the z and caused the frame to twist about which then shattered 3 v-wheels. Fun!
So far I’ve gone over the machine a few times and nothing else seems damaged. A lot of stuff is loose but otherwise intact. Since i’m going to be replacing a few things I figured i’d see if it would be a good time to upgrade anything like the v-wheels or should I just replace them? I’ve seen on openbuilds they have the delrin v -wheel part in the event the bearing is still good but wasn’t sure if anyone had used them or had an alternative that they’d recommend. Thanks!

I’ve used the OB v wheels. They are more than 33% deeper than their Inventables counterparts (10.23mm vs 7.5mm) which means they grab a bigger part of the bearings. You can tell from the profile: one is like /\/\ the other is like |\/| . 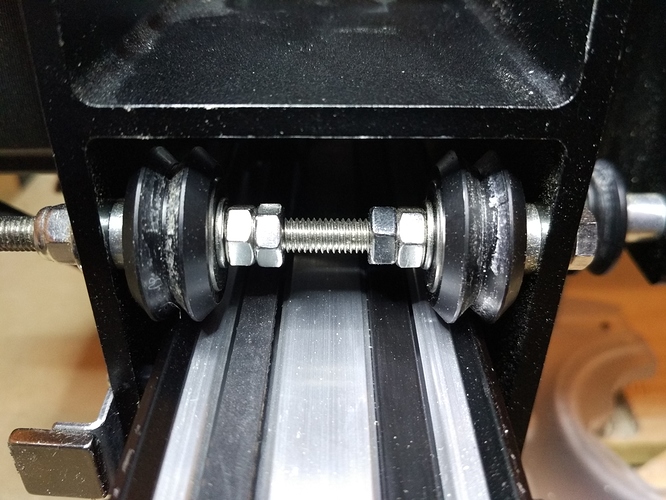 +1 on the linear Z, you will NOT be disappointed

Were the OB wheels able to snap over the inventables bearing and act as a direct replacement or did you need to do addition mods for them to work? I swear I read somewhere on the forums that it should swap in, but I really shouldn’t swear.

Definitely been wanting to do that. I see on their site they’ve got the X carve slider with the plates prepped for mounting. Probably an after Christmas purchase! I’ve always meant to ask those who had it installed but wouldn’t such a tall z cause whipping /flex in the x-axis during moderate/high IPMs when it shifts direction rapidly along the y-axis?

Yes, they use the same bearings.

Nice idea! I think if i’m going to start cutting into the plates i’ll just cut new ones from scratch at that point though.

Well after mulling things over I decided on an early Christmas gift to me and just ordered the CNC4Newbie 5-6" z slider for the x-carve! I’m also planning to order replacement OB V-wheels for the whole machine and reuse the existing bearings since I have no idea how many other wheels may be scored or ready to pop after my little catastrophe. Granted, that’ll probably take a day of just popping the old wheels off and installing the new ones over the Inventables bearings but I’d rather start clean. Finally I’m going to finish with the 9mm belt conversion.
Hopefully this will let it be rebuilt better…
stronger…
faster.
And I wouldn’t mind if it made that Nuhnuhnuhnuhnuh noise either.

The OB wheels are much better than the X-carve. They also make Stainless metal wheels. I currently have these on my X-carve. Everyone tells me I’m going to destroy my rails but, I’m up to about 750 hours of run time and the rails are just now showing very slight wear in a few spots. I cut mostly Aluminum so slower feed rates. The metal wheels improved the stiffness significantly. Rep Rap Champion has good prices. If the rail deteriorates in the future I’ll replace it.

@RobertCanning From everything I read on the forums I know I won’t be!
@GaryDeaver haha I actually read the post where you mentioned you installed the steel wheels. I was very interested as well but I cut all sorts of things at various speeds so would likely get the wear that everyone warns about. At one point in the topic though, the inventables rep said some people bolt on steel rails to accompany them but after combing through the forum I couldn’t find anyone who actually had and where they got it.

I’m definitely looking forward to the reborn machine. Installing rails was a huge improvement by itself and that was my only mod aside from getting Crafty with some pvc and a shop vac for dust removal. Quick question, would the new belts help with keeping the y-axis calibrated before the machine is turned on? I always have to adjust the y sides to even up before I started it up for the day. I’ve often wondered if you could install a second y limit switch in such a way so the two sides would Home independently.

Am I able to keep the stock motors that come with the new model x-carve with the z-slider and 9mm pulleys? I’m reading a lot that the new stock pulleys are pressed on and most people seem to just be replacing the motors but I’ve also seen that the stock pulleys can also be heated up and pulled off? Basically just looking for some help for the best path to take to benefit from my z slider and a 9mm pulley upgrade if I start from a completely stock new gen x-carve. Any help from you guys would be appreciated. Thanks!