4th time carving this recessed square and suddenly about 15% through the job you can see it went straight north on the Y and then all over. It also seemed to be not going the proper distance in the positive X direction before that as the previous cuts went out equidistant from the center in all directions. 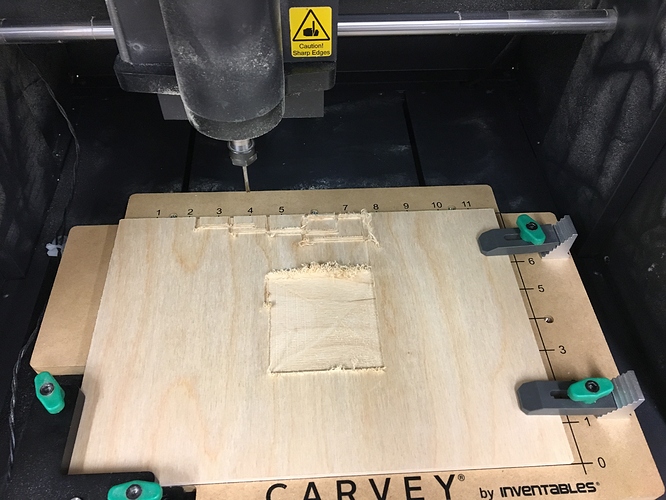 IMG_06304032×3024 1.81 MB
Previous cuts were successful so I’m wondering what happened. Birch plywood, 1/4", bit is 1/8" straight cut, I used recommended settings of 40 in/min feed rate, 12 in/min plunge rate, .03 in depth per pass.
After this, I didn’t know what I should try changing so I replaced the board and started again, and after about 10 minutes the bit broke, which I can see could be caused from the stress of the wrong cuts. I’m just getting to know this machine so any advice on what all this means would be helpful.
thanks,
Erik
ErikNauman September 27, 2017, 3:45pm #2

Here’s a completed successful job, as you can see very simple. 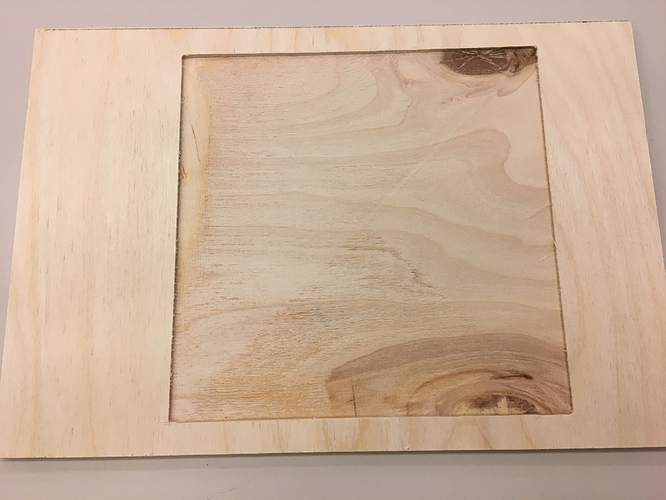 Slow down. I’m not convinced on those recommeded feed rates for the Carvey. Try 20in/min, and see if you’re getting the errant cuts.

If the bit broke your pushing too hard. Keep feed reduce just reduce your doc. did it probe correctly? Sounds like you cut too deep.

Thanks I’ll try that.

Thanks, how do I know if it probes correctly?

If it doesn’t probe correctly, the first pass will be cut at an incorrect depth. If the issue is happening after the first pass, you’re probably going too fast.

Is the probe when it’s touching the smart clamp? Or is it the depth of the first pass itself? I just did a test cut and measured and with a depth per pass of 0.03 inches the first pass was 0.06 in deep, then the second was 0.03 in.

@ErikNauman When the Carvey hits the smart clamp switch it “knows” where the top of your material is. Sounds like yours is off (mine was too, and I think it’s a common problem). In soft material, like you’re cutting, you should have no issues going .06"…try slowing down. Try relaxing the clamping pressure on the “smart” clamp, so it sits a bit higher. Variations in your wood thickness could be causing the issue at well. Clamping only at the edges can create a higher area in the middle. If you’re using an upcut bit, it will pull the material up. Again, try slowing down and relaxing the smart clamp pressure.

@NeilFerreri1 I slowed down to 25 in/min and also didn’t tighten the smart clamp as you suggested and was able to do 4 more jobs of the same cut without incident. Thanks, your advice was spot on!

@ErikNauman Glad to hear it. Out of curiosity, did you measure the depth again? Was the depth of your first Z-plunge more accurate (just from loosening the smart clamp), or was the success just from slowing down?

Looks like it was more from slowing down. The depth of the the first pass was only slightly shallower, 0.055 in.