Hello all, I am new to CNC and with that comes a steep learning curve. I have finally dialled in my 1000mm x 750mm table and using a Makita 1/4” router and its loud. Moreover I’m sure it’s struggling with 6mm straight bits when cutting shapes. So I’ve been searching and researching spindles. I’ve seen lots of air cooled spindles but none I’ve seen allow me to use my existing 1/4” bits? Question is, what should I be buying that would also allow me to use 1/4” shanks and importantly has got the grunt to get the job done as well as be quieter? Look forward to reading your thoughts and apologies if this is in the wrong place. TD

Most of the air cooled spindles use an ER11 collet system. This lets you place many different sized collets into the spindle. 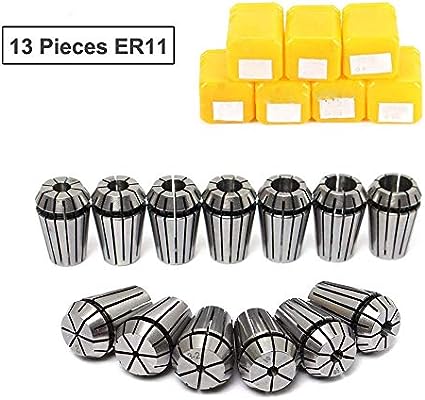 This is just a typical set and does include 6mm and 6.5mm collets. A 1/4 inch bit has a diameter of 6.35mm which should be within the reach of a 6.5mm collet; less than 6 one thousandths of an inch.

You will be able to use your existing bits and other bits commonly available in the United States.

I use a Kress spindle which does not use the ER11 system but I do have a variety of collets and I buy both US and Metric bits.

Thank you for your informative reply, that’s good to know and I will have a look at the link you provided.

I am also using the Makita, mainly at speed setting 1-3.
The actual cutting of my material usually is louder than the router itself.

As far as its power capacity, I have carved aluminium at full width (6mm) and 2mm depth per pass (@ speed 3) Note - this is not with Xcarve

For wood I can not imagine the rigidity (or lack of) exceeding the power capacity of Dewalt/Makita so chasing a stronger spindle may not be very effective.

Elaire Corp can make colletts to spec, cost around $25+s

I have a modified X-carve and it will do 1.5mm DOC on 6061 aluminum. I honestly think it would probably do 2mm if I wanted to push it. It’s possible, but you’re going to need a linear Z and stiffening mods. I also run my Makita around speed 3 for those cuts.

Are those Elaire collets really worth the money? Did you ever bother to check the runout between the factory Makita and the Elaire? I did have their full collet set for the DW611, but when I upgraded to the Makita I never bothered to buy another. I would be curious to know if there really is a reduction in runout between the two. I have a sneaking suspicion the factory collet is better than some think.

I recently ordered a 3/8" collet for my Makita as I’ve been running into some defection issues with long stick out milling procedures. I haven’t ordered an end mill yet ($$$), but I wanted to measure my run out first.

Did you ever bother to check the runout between the factory Makita and the Elaire?

I quickly changed back to stock collet after trying my 6mm Elaire based on sound, which was noticeably rougher and “harder”. Have not measured precisely the runout of either one, but the stock one have been very smooth all around.

I have since then purchased two precision collet reducers (3 and 4mm that fit stock 6mm) which have been very nice indeed.