So I bought a 800w water cooled spindle and the first day or 2 everything was awesome. I was able to set my depth of cut deeper, and feed rates faster compared to my DeWalt DW660 all while getting better results (I cut aluminum only). Last night and today, the X-Axis started to get offset during cuts, using the same settings as the previous days. I did all the usual troubleshooting stuff; belt tension, set screws, v-wheels, etc but everything is in tip-top shape. I even did a massive, full clean/maintenance on the whole machine (scrubbing maker slide, using air compressor to blow all chips away, vacuum everything up, etc). Still offsetting in the X.

So I’m thinking that with the added weight on the gantry (man that spindle is heavy!) the X stepper just isn’t able to drive it anymore. I was feeling for temperature on all the motors and spindle the past few days as I was testing cut settings and trying to get an idea of how the machine was coping. The X-axis stepper gets significantly warmer than the 2 Y-axis or the Z. I wouldn’t say its hot by any means, but its definitely the warmest of the 4. I’m wondering if its a classic case of thermal shutdown on the chip, maybe I need to buy tiny heatsinks?

Here are some pics of my current setup: 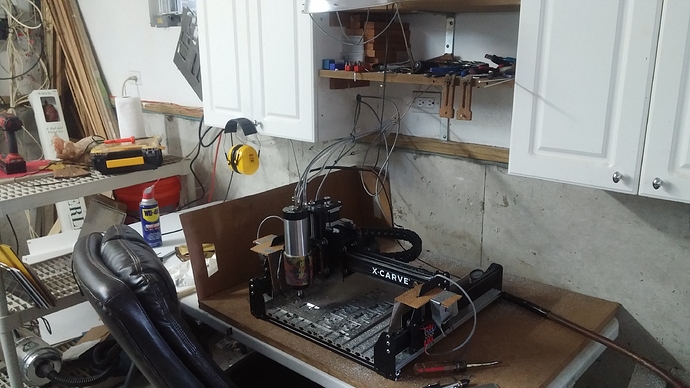 Wide shot of the setup. 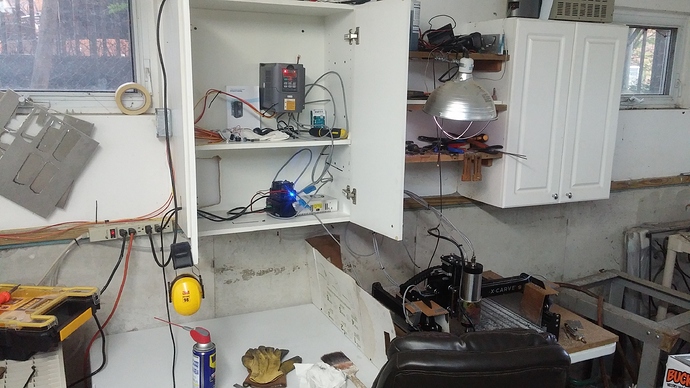 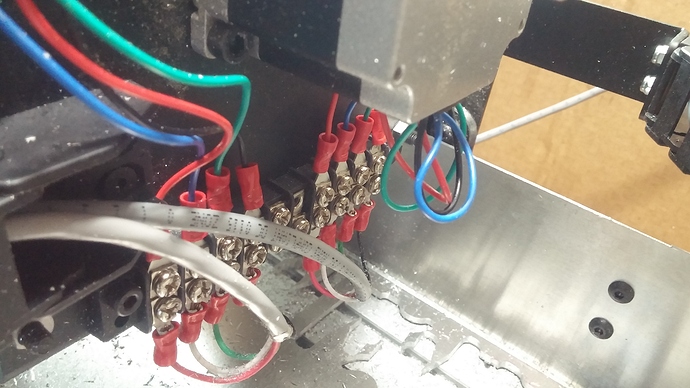 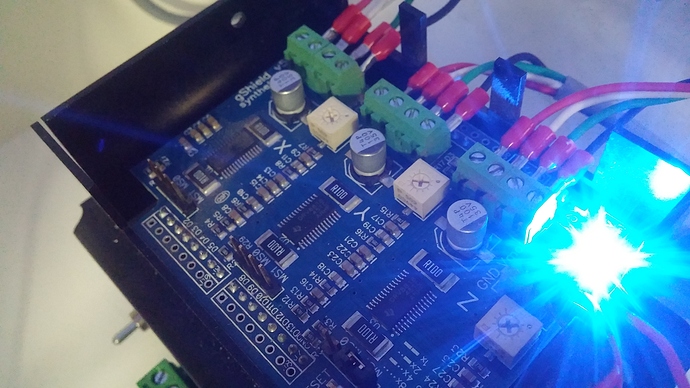 G-shield wiring/pots (note the X-axis is turned to max, I tried lowering it a quarter turn from max, but the problem seemed to be the same). 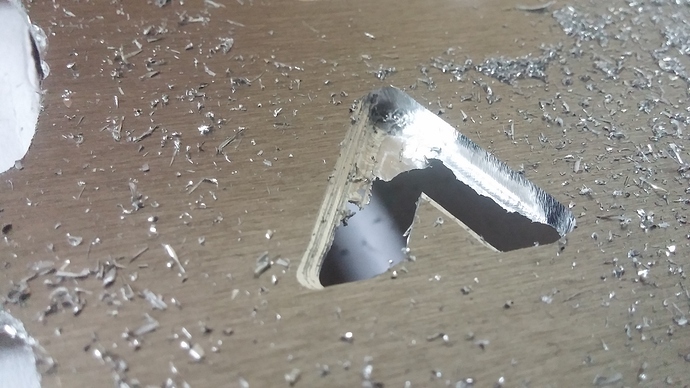 Hard to see, but this is the offset I’m talking about. (see left edge of triangle) 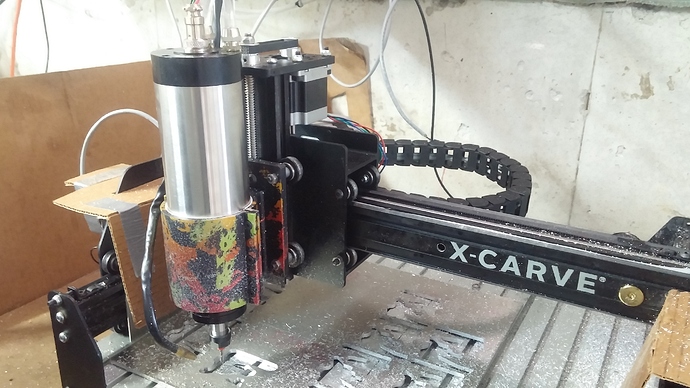 And because I can’t resist, here’s the front of the machine.

I’m considering picking up a TinyG or Leadshine MX3660 (DSP!!!). I’d rather not go to 4 seperate gecko drivers and having a gigantic tangle of wiring to deal with.

What do you guys think? Do I need a bigger stepper motor/driver?

If you have a temperature probe you could measure the case temperature of the X axis driver chip to see how hot it’s running.

You could try to get more cooling to the electronics and use a new mill to see if you get any improvement.

You could try a less aggressive cut to see if that makes a difference.

You could try beefing up your components, but that could be expensive and may not solve the problem.

Its weird though that this started happening 2 days after running so many tests at deeper depths and more aggressive feedrates. I was cutting @ .03" DOC, 70IPM with no offsetting issues (lots of chatter though). Ive backed that down to .02" @ 40IPM and all of a sudden I’m getting offsets? Could the VFD be causing this? I changed a few settings on it from factory following this thread: http://www.mycncuk.com/threads/5814-The-2-2Kw-Chinese-Spindles-Info-Setup-and-Advice-More. I know the 300w stock DC spindle can make the steppers act weird, but I figured it won’t have much of an effect since my new spindle runs on AC voltage but for everything else its DC. They don’t interact with each other, right?

Could running the spindle at 400hz and not, say, 300hz effect the steppers or the driver?

This should not have to do with the size of your steppers since you are already running NEMA 23s. I would suspect a few things. The normal hookup for the Spindle to VFD wire is to use shielded wire which has the shielding grounded on the VFD end and the ground connected to the spindle. Have you grounded the shielding jacket and bare wire on the power cable from the VFD to the spindle on the VFD end? Also try to not run the cable from the VFD to the spindle next to any other control wires. You could be getting a bit of interferance from the 3 phase 220 of the VFD spindle cable on the stepper motors. Also have you grounded your shielded wires on the steppers? The jacket and the bare wire need to go to ground on the controller side for the shielding to be effective. If it is not connected to ground then it is not able to offer the full protection of a shielded cable.

I would say to steer clear of the stock controller and go with the DSP driver. I run 4X Leadshine DM442 DSP drivers with my Planet NC MK3 on the X Carve and it is night and day better over the TinyG which was a huge step up over the stock controller. Just the tuning aspects of the DSP drivers alone helps with motor heating and things of that nature. On the DM442 and many other DSP leadshine drivers, just a simple flick of the DIP switch and the driver auto tunes and runs like a dream.

@Travelphotog I’m using 18ga shielded wire to power the spindle. It’s the same stuff that powers the steppers. I connected the pins 1-3 to the spots on the vfd and pin 4 to the vfd’s ground. The bare wire is the earth, which is different from ground, right (again, electronics noob here)? I haven’t connected the jacketing or bare wire to the VFD. How would you suggest I do this? Do I have to solder it to the side of the body, or something? Also how should I connect the stepper motor bare wire and jacketing on the control end?

FYI - Gecko is self-contained and uses DB9 connectors. Much cleaner and more self-contained than your current setup. You might be thinking about a breakout board and stepper drivers. That COULD be a tangle of wires. The Gecko is a major, major upgrade to both stock and generic BOBs/Stepper drivers.

I don’t think that is your problem though. Something fishy because your machine was working really, really well. SOMETHING in your otherwise sound set up is failing and that can be hard to diagnose.

I had a really tough X-axis shift issue that turned out to be the v-wheels too tight. They had loosened and instead of tightening them loose (?!? what? stand by for an explanation) I just tightened them up and even with plenty of X-axis motor current I was getting hesitation on simple 10-inch travels.

Make sure the v-wheel eccentric nuts are FIRST tight as can be with the v-wheels NOT touching the aluminum extrusion, and spinning freely. Best way to do this is hold the nut with a wrench and torque the allen socket. Then, use a socket wrench to SLOWLY rotate the eccentric nut so the v-wheel just starts to bind on the aluminum channel. Then test with manual jogs 10 inches back and forth. You should not hear or see stutters, and the v-wheels should rotate as the pulley moves the spindle.

Test with a set of complex carves - I made 4 1-inch v-carved squares and a horizontal and vertical rectangle and a bit of v-carve text. The x-asis shift becomes obvious. once the v-wheel tension is right and the motor current is good, and of course all the other variables are ok, you should get a good non-shifted test carve.

Oh and check v-wheels before every job. Damn things WILL loosen.

So I moved my stepper cables away from the spindle cabling, and made another hole in my cabinet to route the spindle cable far away from the steppers. Seems to have done the trick, so its definitely EMI. I attached the bare wire of my spindle to an empty ground terminal on my vfd (i think its seperate from the other ones). Now I have no problems on the left side of the bed but if I machine something on the right side it will offset again. Still not really sure what I’m supposed to do with the bare wire from the steppers, there isn’t really a good earth connection anywhere.

If I find a chunk of metal somewhere with a screw in it, could I just connect all 3 bare wires to that and call it a day?

I bought an 800W spindle and VFD for a CNC project some time ago and had a lot of problems with noise on the steppers wires which was traced back to the wiring of the spindle. Despite having a 4 pin plug, only 3 wires were connected to the VFD - no earth. As soon as an earth was installed to the spindle, the problem disappeared. Much safer too.

The bare wire will go to the ground on the VFD end also. ideal it will have the foil jacket attached also. I am attaching a pic to give you more guidance. 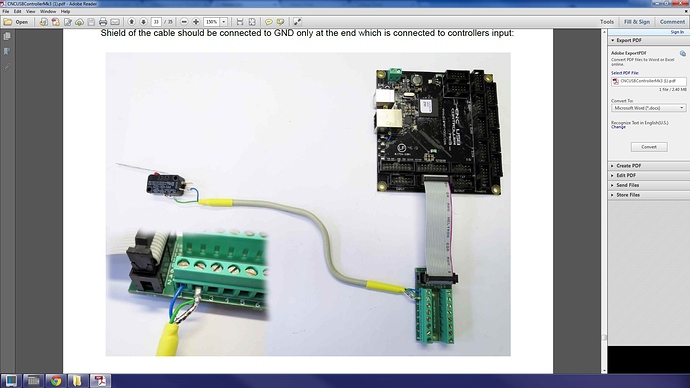 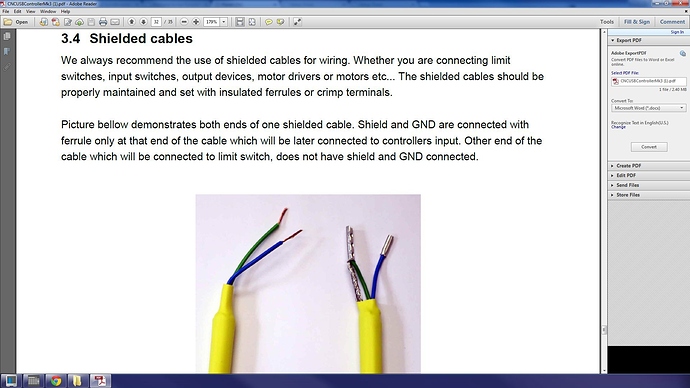 Interesting, thanks for the information! I was always wondering how to appropriately wire up shielded cables.

Often for a wire braided shield cable you just solder a small jumper to the wire braid and then connect to the ground. This is how I have my large 4 wire VFD to spindle power cable and it works perfectly and stopped all the interference I had.

I am glad the info above helped someone out and I am guessing if more folks would use their shielding instead of cutting it away, they would have far fewer issues with the spindle and such and noise in their stepper lines. Maybe the word will spread in time and they will have better results.

Awesome! So just so I’m clear, the shielding foil, bare wire and ground line are all connected together, but only on the one side?

So I made the modifications to my wiring, basically following what the image did. Since the bare wire touches the shielding and probably makes decent contact throughout the wire, could I just use that, or do I need to connect the bare wire and shielding to a ground wire of that stepper? Does it matter which of the 2 channels’ ground I use on the stepper?

Yes - ground only on ONE end (this can be important). It should be the end that connects to your controller, and I usually ground it to the negative of the supply so it is ‘earlier’ in the circuit. That might just be superstition, but I know when using filter capacitors, the closer to the VIN the better to minimize interference.