I’d love to see a Roughing feature. You would make your design, and then specify a Roughing Bit and a Detail Bit. Easel would then cut what it could with the larger bit (the Roughing Pass), then prompt you to switch to the Detail Bit (and re-home it, I guess), then cut out the fine work (the Detail Pass) 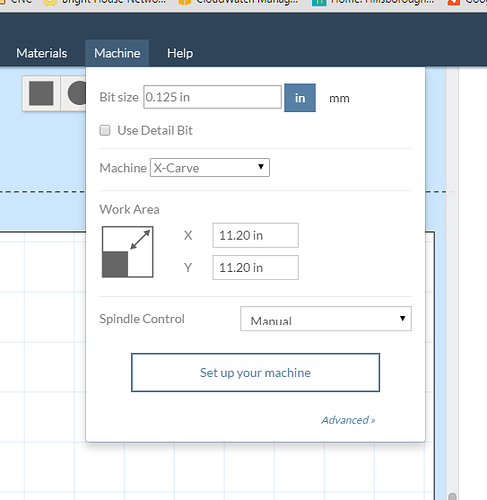 Read this thread for lots more information about that feature

@ChrisWundram, @MikeMerzke, @AllenMassey: I've given each of you early access to test and provide feedback on Easel's Roughing/Detail feature. If anyone else wants access, just let us know, and we'll hook you up. Here's a little guide to how to test this early access feature. Keep in mind we are looking for feedback as to how we can make this feature better. It has a few rough spots right now in the workflow. How to test the feature: By default, Easel will act just like it did before If y…

Thanks, Allen. You guys are the best! I’ll give it a try.

I just sent an email but just spotted this post. Any way I can get added to the early access as well? I’d love to beta test the cutting edge features and provide constructive feedback to help make this awesome program even better.

Michael, Just open the thread below and ask to be added to the early access for two stage cuts.

I couldn't find this in the UI. Using other CAM systems it would set up to first do a rough cut with a large bit, and then go back and fix the detail with a small bit. Like if you are cutting a pocket with sharp inside corners, you would want to use a really small bit to get those corners, but not to cut out the whole pocket. So is there a way to do a rough cut followed by a detailed cut, or is this on the feature roadmap?

Would it be possible to have access to the new rough cut and detail pass feature please. Would find it VERY useful.

Just go to that “Two Stage cuts” thread and ask for access there.