Seeing what I can do...I came up with this! 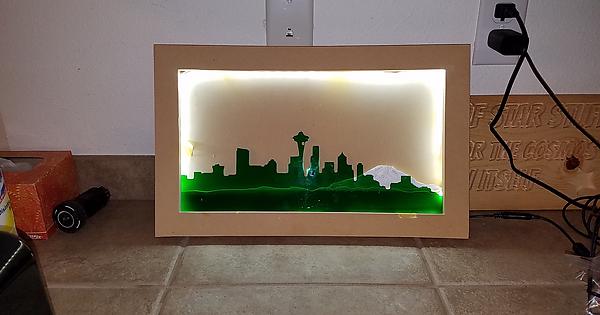 So, after getting my X-Carve setup I wanted to get a feel for the machine, testing clamping, using Easel, doing different types of cuts and such. Since I’d love to make some edge-lit LED signs as well as some shadow boxes, I figured I’d try something cut from MDF and a bit of acrylic as well.

To start, I worked in easel to design the frame. I was picked up a full 4’ x 8’ x 1/2" MDF sheet for only $5.18 (this seemed like an absolute steal since homedepot listed similar for $20). I had ordered some misc bits and bobs from Delvie’s plastics including a 24x24x1/8 sheet of cast transluscent green.

I grabbed a city skyline of seattle, but wanted Mount rainier in the background. Since I didn’t find any to my liking, I found a photo that resembled the skyline I chose and marked out paths in Illustrator. This was a bit of a chore since I am new to illustrator as well and I am not particularly handy with the path and scissors tool yet. After geting a variety of paths setup, I exported them to SVG(actually several SVGs because I couldnt seem to get easel to accept the full single image). From there, I began placing them.

I wanted the entire mountain/foothills backdrop to fill the frame, but sit behind the acrylic. Since I was using 3 cuts from the 1/2", I inset the frame a bit on the second piece for the lights and pieces to sit in. One mistake I made is that the work piece with the foothills and mountain was not faced (planed?) by 1/8" to account for the acrylic.
I made several copies of my paths – one for the total cut, one for the mountain (which I gave a bit of depth behind the foothills) and several ‘detail’ bits on the mountain.

The cuts themselves went pretty well after my first experience with the acrylic and noticing the uneven MDF. I had set the workpiece depth appropriately, and for the parts that didn’t go completely through I sanded them loose afterwards.

I’m still considering ideas on how I can improve the look of the piece (any paints or finishes that work well on MDF? It is very …meh…) but all in all I like the concept itself and it was a great learning experience. Once I touch up the look of the piece I’ll permanently attach the LED lighting.