Hey guys, I purchased my xcarve about 3 months ago and been doing pretty good making and selling signs. I wanted to make a site for other makers to sell their CNC files. Is there any interest from anyone in here to want to sell their designs? You will keep 100% of the revenue you generate (minus credit card processing fees) I want about 5 makers to help me with getting it going by adding their designs to test out the site.

Quite a few projects that have been shown here on Inventables have come from or are inspired from Instructables.com or other sites anyways.

My background is in graphic design and I fortunately stay very busy 7 days a week. I would love to make some small furniture pieces however stopping my workflow to design the pieces (Corel Draw X8) and then converting into G Code (Vetric Desktop Pro or Aspire) is just not in the cards. So I would happily spend some money to purchase the files instead of taking the time to design them.

I can see where people would not want to sell some of their designs but the great thing is they don’t have to. Myself is a great case in point… I hold some college licensing and I would not and could not sell those designs since they are my bread and butter and it would violate my contract with the institutions.

However I have hundreds if not thousands of other design files and I would consider selling some of those.

That’s a good point and I would feel the same way.

I’m in a small town in Wisconsin. My Dad (79 years old) absolutely loves selling (mostly signs) at craft shows, flea markets and such so I take him to quite a few during year. We do pretty good at them… I think the worst one we have gone to was still a $1k weekend

Anyways… We went to one and a few weeks later we went to another one where we saw 2 of my original designs being ripped-off by other vendors from the previous show. That’s not cool at all. The sad part is that if they would of came and asked for for design help, I would of gladly helped them, free of cost, come up with something original to them.

I don’t mind something inspired by and close to

I wouldn’t want someone to steal someone else’s free designs and make money off of them. It would be in the terms of use as a seller and I would gladly work with anyone suspecting someone selling their designs.

The site is for someone who doesn’t have time to design or the skill but enjoys the process and wants to make money selling projects.

I think it would be a Home Run.

@jasonday Maybe you could prove out the idea by using existing ecommerce store builders like Squarespace or Etsy? I know both of those allow for “digital download” products. That might give you a chance to find out more about problems of copying, etc, with zero/near-zero upfront costs.

There are sites for selling designs. Not like you suggest but rather someone like Phil would be hired to do a design. They are contract sites and everything is set up to protect the designer and the customer.
Elance is one of them.
Not sure if this is what you were thinking but I thought I would throw it out there.

Well I wanted to create a central location for designers to sell their CNC designs. They each get paid for their sales. The bare bones of the site is up and running

Phil, can you send me clock face numbers

BTW your pic at home depot on the wood, 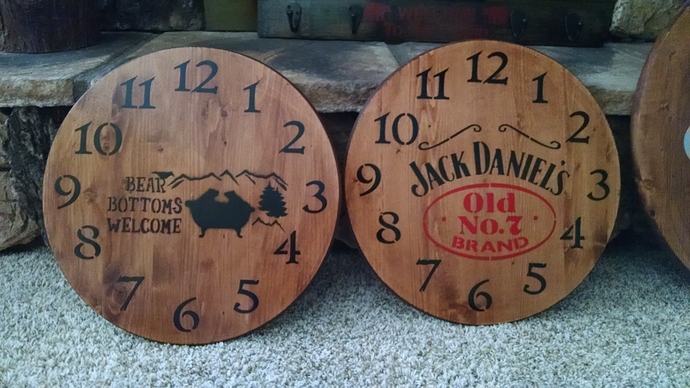 I would buy projects. If someone is willing to sell them