I do a lot of inlay work with end grain cutting boards. I love the app. It’s makes everything much easier than my old system, but I was wondering if there was a way to break up different portions of An inlay. Most of the time whenim cutting out inlays I don’t need them to appear, layout wise, the same way they appear on the surface they are being put in to. Like. If I have multiple lines of text I would like to be able to compress the inlay layout to save on material. 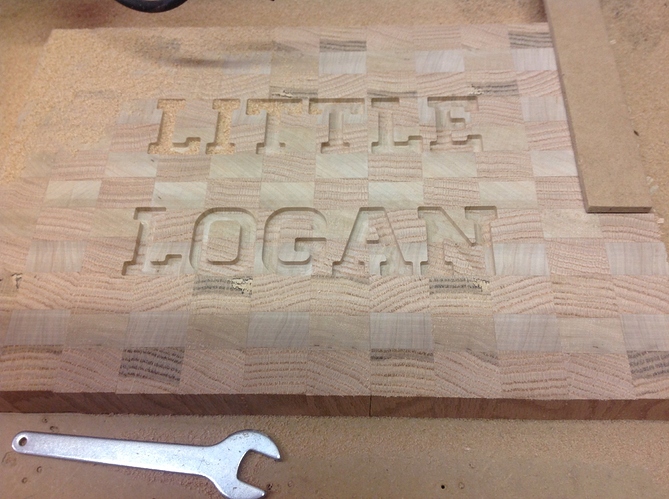 It would be nice to arrange the letters in a way that uses less material when I cut out the inlay.

Thanks for your help. Love your product and super excited to get to work with it.emphasized text

Also would come in handy if there is mistake at some point in the carving process so you wouldn’t have to start over from the beginning.

I agree with being able to manipulate text in Easel but text letters unfortunately are not able to be separated. I use CorelDraw, so imported SVG files treat the letters as separate pieces, and can be moved individually. Could you create separate letters in Easel rather than typing whole words and then move, rotate or whatever to layout letters as you wanted?

There are a couple of methods I’d use for this:

If all you want is to control the distance between the lines of text, create each line as its own text block. Then run the Inlay app on each line separately (with identical settings).

For even more control, run the Xploder app on the Male inlay to break it into individual shapes that can be positioned however you like.

The Xploder app also breaks apart text that hasn’t been run through the Inlay app too.