My X-carve worked fine two days ago and now today it is not cutting the depth correctly. It is not the wasteboard or the project itself. I have triple check both of those. It seems like it does not touch the material before it starts cutting? I have checked the dimensions of my project and its spot on. Has anyone run into this issue? I thought homing it should fix any calibration irregularities but that did not help. I am not the only one with this issue. I am part of a group on Facebook and another gentleman is having the same issue.

Have you calibrated your machine? I have had the machine lose the calibration and have to renter all the numbers.

I will look into that. I don’t know how to do that but I wasn’t looking for that directly so it maybe a solution.

If you have any sites or references that would help out greatly.

@AdamRoy. Here s a video on how to calibrate your machine. Write down the results for future reference. If the machine loses calibration again, all you need to do is to re-enter the numbers.
https://youtu.be/UHd9HgHDqMQ

It seems like it does not touch the material before it starts cutting?

Do you use the Z-probe?

If you do, or set Z-zero right on top of the material, any miscalibration will not matter as it would retract/plunge the same (incorrect) distance.

I suspect either a misconfigured probe offset value or something mechanical causing loss of steps.
I assume this is with an Easel-only design / operation and not a design generated outside of Easel?

I did the calibration and It was not off at all. It moves exactly how it is supposed to. It is strange. The program looks like it adds a .25 inches to the material. I use a probe and haven’t had this problem before two days ago. I do not carve daily maybe every other day.

yes easel only design. It is actually just letters. I was thinking it was the probe too but i would not know how to correct it.

Have you tried to manual probe the z axis so that you could eliminate the probe?

Hey guys … BRAND NEW owner here, having a very similar problem. Only my second project, but first after the “test” cut intro to easel. I imported an SVG file I made in illustrator and had it (what I thought) was all set. It cut the bottom half of the design fine and then as it moved towards the top got fainter and fainter. Basically missing the material.

Will try calibration steps tonight. But very discouraging to get these results already. 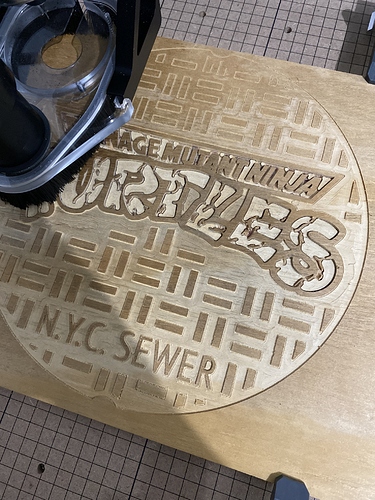 It cut the bottom half of the design fine and then as it moved towards the top got fainter and fainter. Basically missing the material.

Basically the surface (spoil board) isnt level relative to Z. (no machine is 100% precise before tweaking, Xcarve or otherwise)
To get maximum Z-precision its recommended to add a 2nd layer of spoil board and skim cut that, this will ensure Z is even relative to the work surfce.

Assuming the material to be carved also is uniform in thickness.

Thanks. Sounds like that’s next… so if you put a layer on top - how do you accurately transcribe the threaded clamp holes below? Or skip’em?

Appreciate the layman’s talk for me!

next… so if you put a layer on top - how do you accurately transcribe the threaded clamp holes below? Or skip’em?

You could simply carve new holes with same diameter/spacing and then anchor it to the original spoil board. The skim-cut it so its precise relative to Z.
Make it smaller so the skim-cut can reach all of the 2nd spoil board.

Hi,
I think before you add another layer of spoil board check that you assembled the frame accurately. Place a bit in your router, manually lower the bit till it just touches your spoil board with the gantry at the front home position. Manually and slowly move the gantry back. Looks like the gap between spoil board and bit will increase in your case. Losen the four corner braces and bias them all in one direction down or up your call. There isn’t much slop in the holes. But over a long distance it doesn’t take much. Are the bottom cross rails flat to their mating piece? The manual front to back, side to side probing of the spoil board will reveal mechanical misadjustments that can decrease the amount of material you need to skim off in a surfacing operation of the spoil board.

Hey, I was rethinking this based on you stating that you had checked out your machine. Any chance the collet is not tightly clamping the bit enough? For me, in the past, on my manual router the bit pulls out if loose. Maybe your cutter type and how the program approaches the cut gives an opposite result?