I’ve done some digging here, but not completely clear on using shellac over paint. I’m attempting to get rid of the need to use transfer paper because it’s a pain. I’m planning on painting the wood, sanding, shellac(2-3) coats, then carve everything. Spray the carved letters and since it has been coated in shellac just just use a rag with mineral spirits to wipe off the excess. I generally use latex paint for the wood surface, just wondering what shellac I can use over it. As much as I’ve done in wood working I’ve never used shellac over paint. I’ve seen some say it works, other say it doesn’t.

I’ll do some experimenting with shellac then. I’ve got the water based poly I use on flags and was going to test it too. I’ll see to see what type of paint is in these spray paints I guess.

I have been using acrylic paints and tiny brushes to fill in cut out letters, then just a light sanding to remove any that got on the top surface, but my hands are mostly numb and shaky right now so I want to give the spray a try and see how it wipes off. Going to try the acrylic and wipe it too.

No but I definitely will. Thanks!

Just watched. That’s exactly what I was hoping for. My base surface is going to be painted under the shellac before carving though, but I think it should work out just the same. I may go ahead and pick up a little bit of oil based just in case the acrylic doesn’t work as well.

Looking at the zinsser shellac. I’ve seen people say with and without wax, and I see water based. Any preference on which?

That’s one of the exact ones I was looking at! Phil to the rescue, once again!

I sold most of my automotive spray guns, but did keep a small detail spray gun. I’ve used it for so many things, and plan on trying it out with some thinned paints when I can get my garage arranged and set up so I have a my parts washer and tiny paint booth together. 1 car garage doesn’t give me much room like I’d like lol.strong text 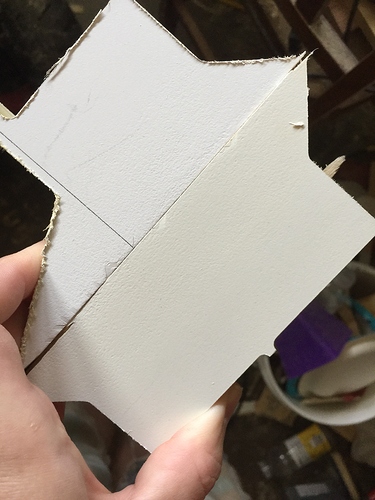 Doing a test on scrap. First coat has been on 20 minutes and already feels dry to the touch, going to wait the full hour, hit with some 320 grit, then do a second coat and test carve later tonight. Does the shellac eventually dry clear? Compared a clean piece and one with shellac and the shellac one now looks yellowed.

Also did a test piece with a water based poly. Not sure how it will hold up to the mineral spirits though when wiping the excess paint away.

I bought the clear. It still has just a slight yellowed tint to it this morning compared to the one I coated with the water based poly. Going to go to lowes later and get some of the sanding sealer to test too. That shellac is going to be fantastic for some furniture I’m building either way if it doesn’t work for me on painted carvings…at least the ones painted white.

Used the acrylic paint to fill in the carved area on the test. On shellac mineral spirits got 99% wiped clean. On water based poly mineral spirits got about the same results. Very light sanding with some 300+ grit should take care of that. Wasn’t sure how the water based poly would hold up to be wiped with mineral spirits and then wiped dry, but it appears fine so far. If it holds up I’ll probably go with it on this project because it didn’t tint the white painted base underneath like the shellac, plus I can put a coat of satin clear poly over top of it and the paint, unlike the shellac due to the shellac containing wax. Can’t find the zinsser waxless sanding sealer anywhere to test out.