Something single line that can be used with the finer bits and just carve single line versus outline, fill or cut inside line.

I’m sure others can provide more detail, but my understanding is you can import your text from many other applications.

Whilst I use VCarve mostly, the text options are relatively meagre.

I use another application to design the text and layout and then import that work into VCarve. I quite sure Easel can do the same.

Or the bits are to large for some of those cut lines. I would just like to use a small bit and have it cut a single line for text. So I can achieve small text

It might not be ideal, but if you have CorelDraw you can use the technique below. It works pretty well.

I’m guessing a Plug-In programmer around here could make use of this:
https://techninja.github.io/hersheytextjs/

Whilst I use VCarve mostly, the text options are relatively meagre.

If you get really stuck you could import Hershey fonts into Easel as SVGs and typeset it yourself.

Hershey Fonts in SVG by schmarty

Making text for Unicorn or EggBot plots isn't always a fun process. Most tools require you to convert text into paths, and even then you get the outlines of shapes, which can often turn messy at small sizes. mifga pointed me towards the Hershey...

Add my name to the list of those who would like to see single-line fonts added to Easel. I’d like to be able to engrave signs with scientific names so I also need a single-line font in italics.

Add my name to the list of those who would like to see single-line fonts added to Easel.

Ditto - Single-line fonts are on my wish list as well.

I’m all for single line fonts being natively supported on easel… and here’s why.
I have been tasked with making office door signage. The originals looked like this: 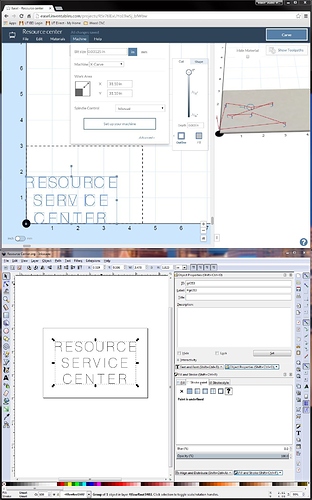 Admittedly, I’m using a 1/16" ball end mill, but seeing as I only need to cut a mere .003" to remove the black top layer, the cutting diameter should be negligible.

Am overlooking something? Or am I just going to have to give in and “invest” in VCarve Pro? Maybe some 2.5D freeware??? Such a simple operation should be able to accomplish with easle.

Please let me know if I’m just being newb and call me out. I will am very open to criticism at this point.

I do want to ask - where did you get your cambam font for inkscape?

I’m using Hershey fonts but running into some problems.

What am I missing? Thank you.
Greg

I tried and failed, then I saved as DXF and reloaded into Inkscape saved as SVG and was able to load it into Easel

Glenn - that worked for me as well. I find you need to ‘Simplify’ a few times to get the lines to look right in Easel. But overall it works. Thanks for that tip!

Yes, I’ve seen that before. It appears to look like a text block. Simply select the black blob and click delete. It should go away and than you should be able to see your text.

it deletes the whole thing no text left over

To fix your import error, try saving the SVG file as “Plain SVG” not “Inkscape SVG”… see if that works. You’ve got the right idea. Unfortunately, you will come to the same dead end that I did. Check out my other post on Reddit that has gotten a few constructive solutions. None of which involve Easel unfortunately. The support for single line font engraving is just not as easy as I thought it should be

Were you able to get a tool path for the imported single line font?

GrantFlude - try selecting just the corner of the black box. Perhaps the box and text are getting selected. Otherwise, I’m not sure what to say as it always worked for me.