Context: Attempting to complete a large cut (28"x20"), approximately 45 minutes in duration. The shape is essentially a rounded rectangle. All corers cut smoothly except or the far right corner which was cut last. 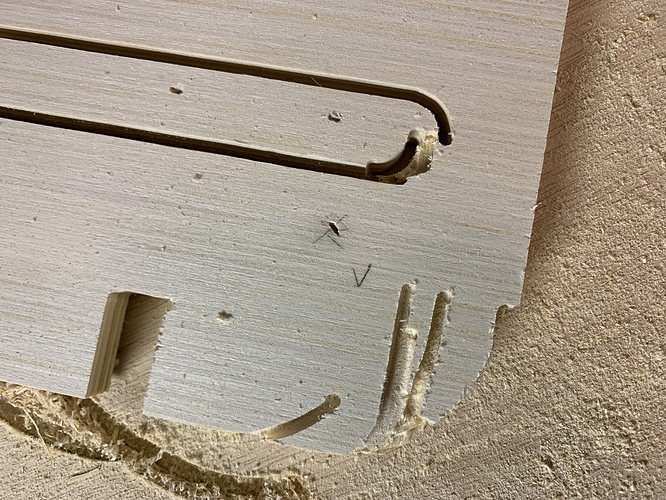 I can only suggest that the cutter forces are greater in corners AND/OR depth due to chatter AND/OR non-prependicular Z axis (out of tram). Did you hear a “grinding noise” when the bit started to drift off course?

What depth per pass are you trying to cut with?
For a 1/8" bit (a guess) it looks like you may be trying to cut too deep on a single pass. When cutting with the grain, cutting forces are less than cutting cross grain.

Hmmm, interesting point about cutting forces when cutting against the grain. Here are some more details about the settings I was using:

Nothing wrong with your cut setting to me. Your picture really looks to me like the actual cut depth is way more than 0.05" per pass. The cut goes through several layers of ply. 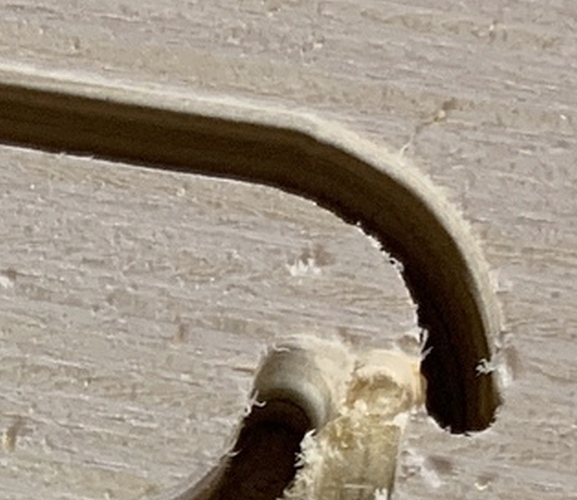 Please post the first 10 lines of your gcode file.

Note: That image is after a couple of successful passes. To clarify it makes a couple clean passes first and then makes the error…

OK, thanks. This code snippet cuts a straight line in two passes. First pass is at -.05 depth, and then bit drops to -.1 and makes the second pass. There is no curve to this, so I would like to look at the rest of the code to be sure the curves are being cut the same. We can either verify or eliminate the gcode file if the curves cut the same.

Please zip the file and send to me as an attachment, if you wish, at:
picengrave AT verizon.net.
I will run the complete file as a simulation to check the curves.