Hoping someone can shed some light on the following.

Overall machine measurements from side to side and front to back are the same and the diagonal from corner to corner are both the same so i cant seem to identify where this slight discrepancy has come from.

Have attached photos of where i have been measuring so any ideas or recommendations would be much appreciated. 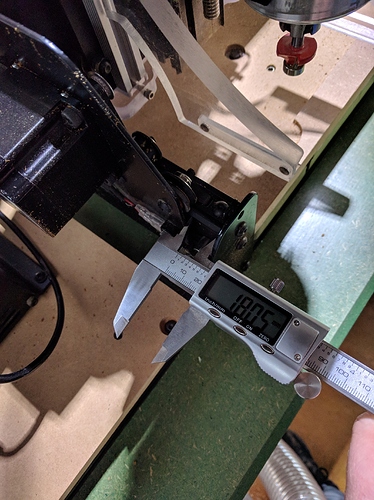 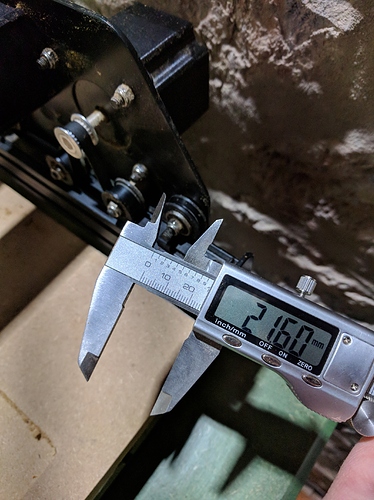 Tried this and everything seemed correct. The 2 distances were a lot closer. Within .5mm. Ran a test carve, rehomed and the distance was the same. However, as soon as i powered the machine off, the right hand side jumped back out of alignment. Back to the 21.60mm measurement i took originally. Powered back on, jogged and then rehomed. Left side measures 18.05 and the right still measures 21.60.

That indicates that there is some twist in the X/Y plane.

You could try this to see if you can make it better.

Turn the machine back on.
Jog away from the Y end plates.
Home your machine.

If you still have the same offset, then the end of your X axis rail may not be cut off square, but have a slight angle to one end or the other.

Finally got around to trying your suggestions!

Have managed to get it a lot closer than it was. Still not perfect but definitely better.

Thanks for your help.

The misalignment observed between the ends of the X axis rail when moved to the front and the Y end plates may not be a problem. Several photos are attached (if I can manage it) to show what I’m doing about it - nothing.

First of all, thanks to all that contribute to forums like this. Sorry for the length of this writeup.

I started reading this thread after a recent “crash”. That is, while finishing a carve, the bit started backing out of the router collet, digging deeper and deeper into the carving. Quickly, the X and Y axes could not handle this and were moving rather violently. A UPS circuit breaker tripped and everything fortunately stopped.

So, now, I was worried about possible damage to hardware and the X-Controller. Nothing was obviously bent nor belts broken or stripped. The X-Controller powered up okay. But, when I tried to “0” X and Y, I found a little, approximately 1 mm, offset in each axis that was not there before. So, I read THIS thread and checked for offset described.

Indeed, there was offset. I don’t think I had ever looked for this before. So, I tried the first suggestion – hold the X axis against the end brackets and turn on the X-Controller. No change. Next, I tried using spacer blocks to hold each end equidistant from the end plates. It was too hard to hold everything by hand and then turn on the X-Controller so I made the two 3D printed spacer blocks shown in the picture. These tightly fit into the plates as shown. But, again, with the blocks in position and turning on the X-Controller, there wasn’t any change in offset.

Next, being something easy to try and not being an ME (to more logically try and figure out what was wrong; I’m an EE), I tried loosening a belt on one side and then re-wrapping and tightening it around its stepper. Still, no change. So, there must be some “racking” somewhere in my system. I’ve read “horror” stories about “bad” hardware, but, it seemed liked it was going to be hard to measure and find where the problem actually was. So, I started to think about whether this offset was really a problem or not.

Nothing is bent. The X and Y axes are perpendicular.
Nothing is wrong with the electronics.
There isn’t any impediment to motion, like a bad or slipping belt.

Then, maybe, one can live with the observed offset IF they can align the workpiece parallel to the X and Y machine axes, wherever they are with respect to the frame including a misalignment with the frame.

How do you do this?

I had purchased Charlie Thomas’s Triquetra calibration block which is capable of finding X, Y, and Z zero on a corner. I didn’t like using this block for X and Y for the following 3 reasons:

Each diameter bit requires a different calibration file; cumbersome.
Non-straight bits require more careful orientation prior to calibration; again cumbersome.
Most of all, finding X, Y, and Z on one corner does not ensure that the workpiece edges are parallel with X and Y. Maybe this is not a big problem for small pieces or if you completely cut the finished part out of the workpiece.

I still use the Triquetra for Z calibration as I like it better than a cheaper Ebay unit or Inventables’ Z calibration block. The Ebay and Inventables’ blocks are too “light” and the wiring wants to pull them out of position. So, how to find X and Y zero to “ensure” that the workpiece sides are parallel with the X and Y machine axes?

I had previously added the laser “cross” alignment system shown in the photos which has been described by others. Specific installation methods and how to use it will vary. I attached the laser to a 3D printed holding fixture itself attached to a Makita router mounting bracket purchased from John Schneider who sells them on this forum. The slots in the laser mounting enable me to align the center of the “cross” with the center of the router spindle. Therefore, there won’t be any “offset” in Y, only X. The “legs” of the laser cross need to be adjusted so that they are parallel with the X and Y machine axes.

For calibration, I use a small piece of 1 X 4 pine. Using VCarve, I created a simple macro to just cut a shallow,1/8 inch, grove in this pine. (This is so simple, you could code this by hand .) I did edit the VCarve file to cause the bit to remain at the end of the carved straight line instead of returning to home as defaulted by VCarve to make it easier to measure the X offset correction needed. Before running the macro, I manually set the router bit to 0, 0, 0 on the lower left corner of the workpiece. It doesn’t matter if the workpiece X and Y are perfectly parallel with machine X and Y at this time.

After running the macro, I know that the line carved IS parallel with the machine X axis. So, I rotate the laser’s focusing lens so that it’s “X beam leg” is coincident with the carved line. To do this, I also have to adjust the laser’s Y location mounting slot as well. The laser is now in line with the spindle in the Y axis. It’s cross beam axes are now parallel with machine X and Y axes. I finally measure the distance between the beam center and the bit to determine the X axis offset needed.

To use the laser, before turning on the X-Carve, manually move the X-Carve X and Y axes so that the laser beam’s “cross” axes are coincident with the left and bottom sides of the workpiece. Then, I attach the workpiece to the wasteboard (using screws or clamps). I start the X-Carve and connect it to UGCS. In UGCS, I first run a macro that moves the X stepper by the amount of the measured X offset, about -2.75 inches, in my case. Again, no Y axis correction is necessary.

Next, I run another macro, independent of bit size or shape, to find Z zero. The Triquetra (that I have, maybe there have been changes) has a big hole right at X, Y zero so I can’t use that point to find Z. The macro moves X and Y to another position over the Triquetra and then looks for Z. I added a 10 second delay after finding Z zero to allow for removal of the Triquetra. Then, the macro moves everything back to 0, 0, 0, ready to carve.

To correct my initial X and Y offset, I just recalibrated their steppers per Charlie’s nice calibration writeup. I don’t know how they changed in the first place. 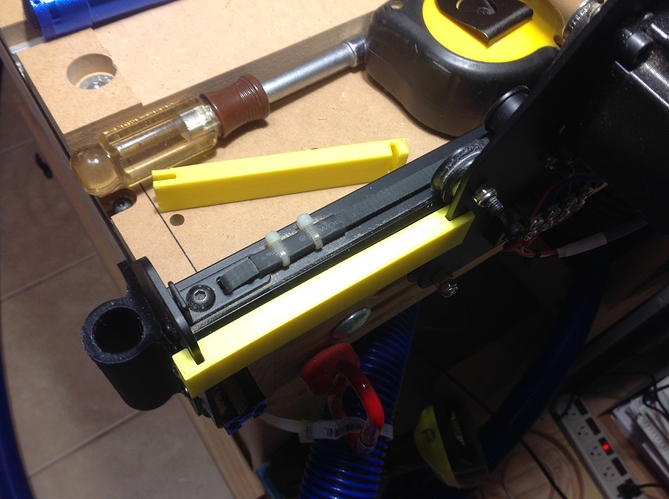 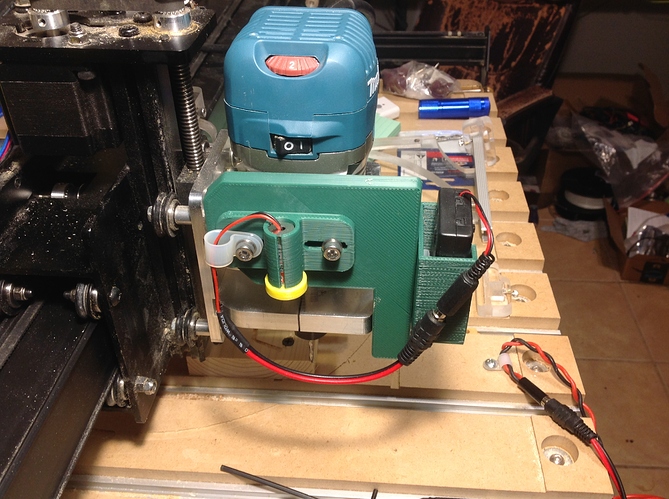 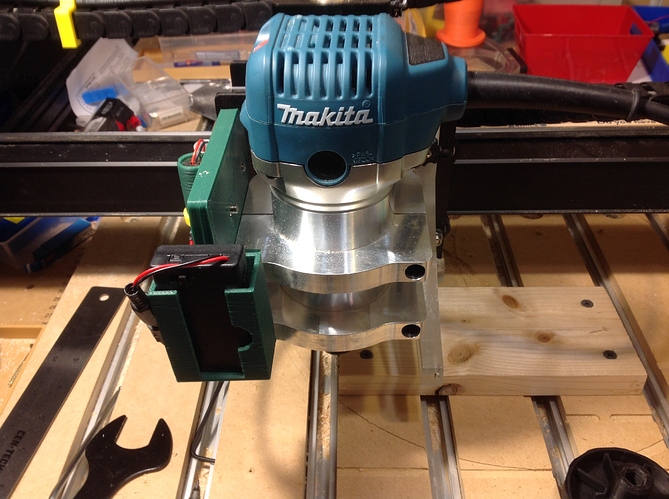 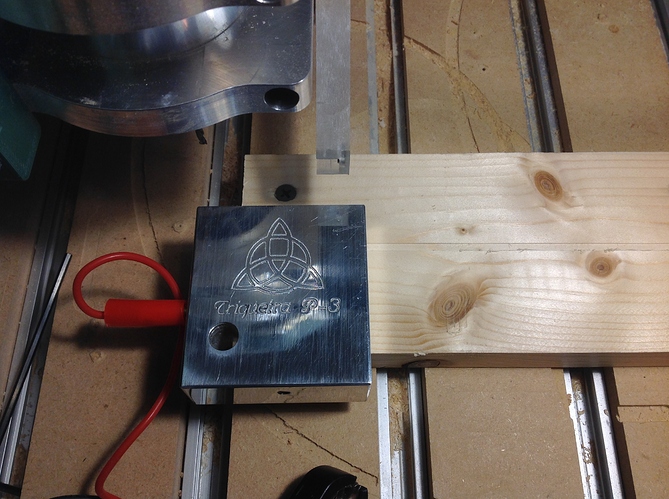