I am building an electronics enclosure that houses everything to drive the SO2.

You can check the progress, as well as other projects, on my blog: 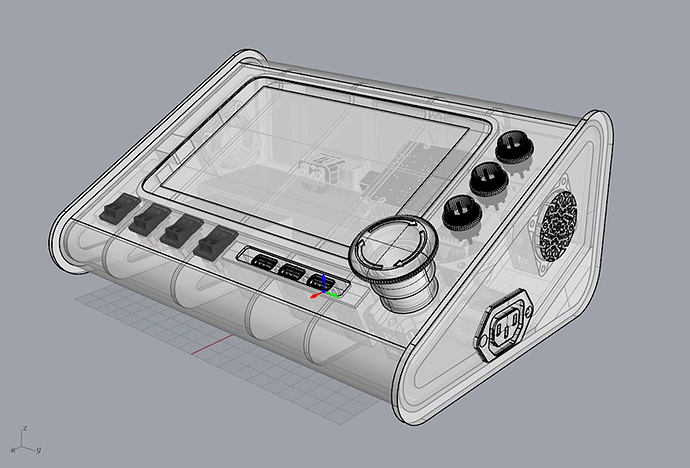 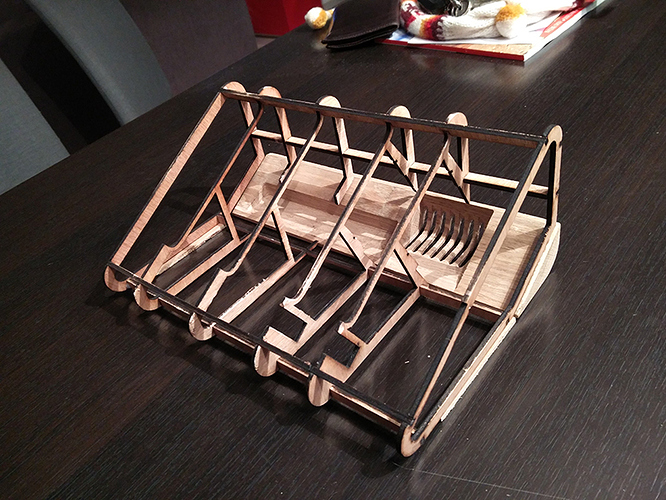 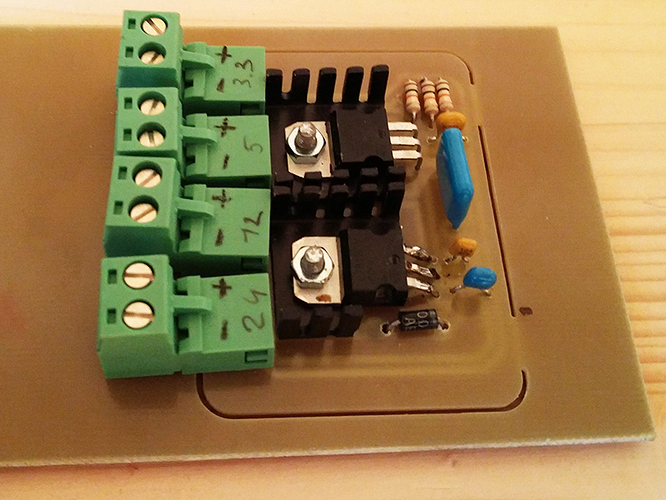 Part 1 of the electronics:

Holi Moli this looks good, I hope Your gonna leave some plans for us morals to replicate.

Yes eventually when it is ready, as I am making modifications all the time as I am building it.
Updates: more electronics & BENT WOOD! 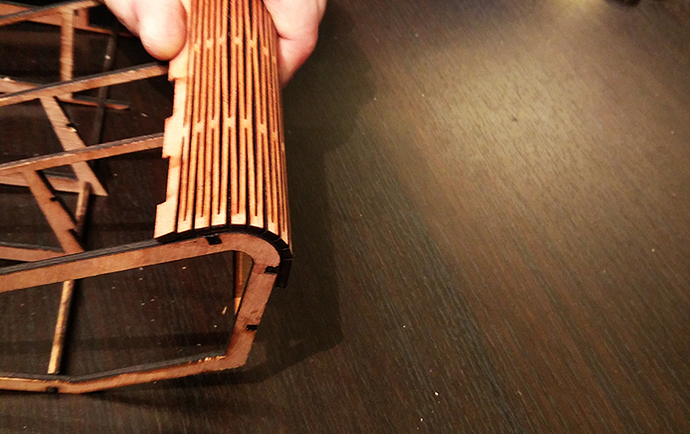 It’s been quiet around the electronics enclosure i’m building, but I have been doing some research and testing things out. I finalised feature implementation and the button placement fo… 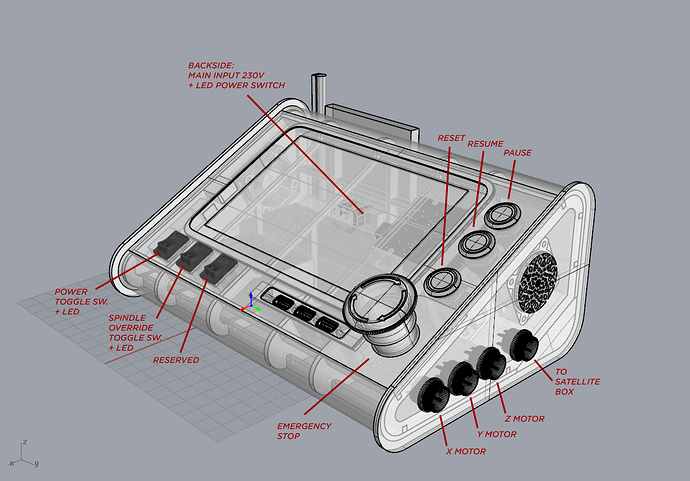 Thanks for posting your experience with trying to mill a living hinge. I’ve been looking at doing similar for an enclosure and don’t have access to a laser cutter, so it’s good to know what I’m up against if I go ahead and try it.

i think it is doable if you can control the generated toolpaths to work left to right, top to bottom.
This way, for every new line it would mill, it has the already cut paths above, but also always has untouched wood below, which will provide a lot of support for the cut being made.
My toolpaths were erratic so it failed when trying to cut between 2 already cut lines. It makes sense hat the wood bends away if you’re trying to make bendable wood

I am pretty confident if you work line by line top-down, the wood will provide enough strength to be able to cut such a pattern flawlessly.

The only thing is you need a long enough endmill. Typically with that small of a diameter they are very short. Mine are just a fraction shorter than my 3mm plywood. But If you mill the underside, it doesn’t matter very much that the tapering buries slightly into the wood, you won’t see it after all.

And yeah, i kept feeds and speeds very conservative, since a mill that fine looks very easy to break. So milling takes pretty long. Especially compared to lasering

The technique that you described has been used for a very long time.

For instance, look at the linings on the inside of a guitar. Traditional “Kerfed” linings have been used for decades in acoustic guitars.

The closer you place the Kerfs, the more fluid the board will bend. A thin kerf saw blade, such as a skil saw blade, is better to use than a traditional table saw blade (most of these blades can still be used in a tablesaw as well, as long as the arbor matches the arbor hole on the blade). With the table saw blade, the kerfs can be too wide for sharper curves. The thinner channels are better.

I have also found for really tight Radii, that if you file the leading edge of the kerf (back face surface that is against table saw during cut) or use a V-bit to knock off the top edges of the channel, then this allows the board more freedom to bend. This more freedom is given bc the bottom of the kerf does not close up as quickly and bottom out.

Spacing of the kerfs are important. More or less what is happening is the board is Kinking at each Kerf, not necessarily bending. The closer the kerfs the more kinks. But this is a good thing bc the kinks are not nearly as severe. Once the workpiece is bent, it will have a whole lot of these small kinks, these can be removed with light sanding using a flat sanding block. The smaller more Numurous kinks will sand out much quicker than with the wide spaced kerfs. With wide spaced kerfs the bridge between the two pieces can actually be sanded away, allowing the kerf channel to surface on the wrong side of the workpiece. The technical term for this is BAD. Lol.

This will not work as a hinge though. If the workpiece continuously bends, then eventually the kerf will crack and break at the bridge.

This is a good technique to use on thicker stock that does not bend well. We luthiers pretty much see and use it everyday.

Thanks for bringing it up.

Sorry, wasn’t trying to insinuate anything. Just trying to add more information for other readers.

Yeah you are absolutely right. The idea of that lasercut line pattern was so fixed in my mind that I just forgot about that option.

Anyway I am going with the lasered lines, but it probably is a viable alternative for those who don’t own a laser cutter. 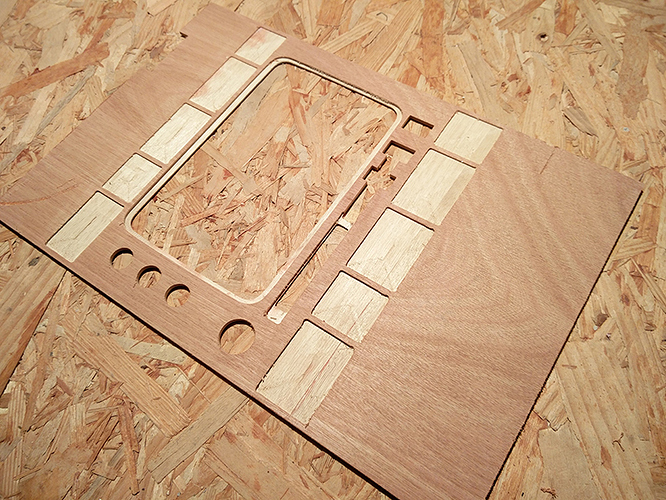 Very interesting discussion. My exposure to bending wood and living hinges has also been through the laser-cutting community (despite not owning one) so the alternatives hadn’t occurred to me either. It sounds like I’m going to end up spending some time in the shop soon running some tests.

Interesting read on your latest update. You’re making me nervous with that picture of you holding down the ply right near the endmill though. 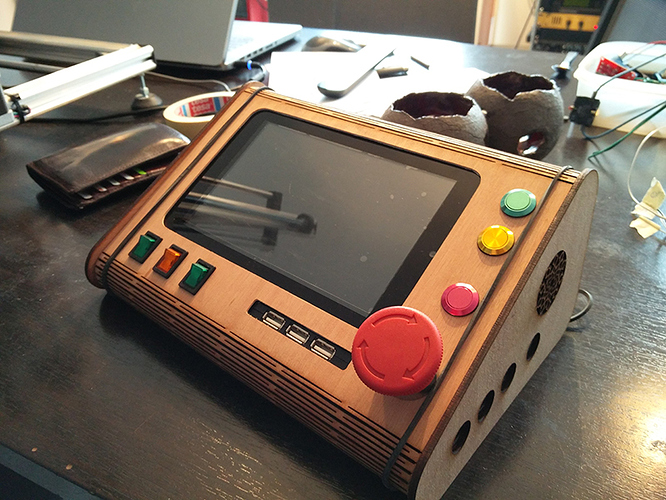 Today I decided to take a definitive stab at the front panel. Everything is set up for success: I trimmed my wasteboard (for the first time ever) and the laser cutter finally cuts perfectly. Millin…

I don’t think I’m going to do anything to it.

Update: It is ready and drying as we speak! 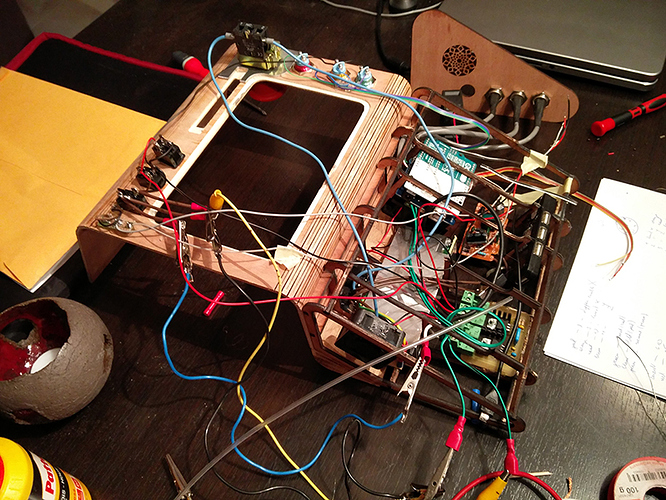 it is glued shut, so I won’t be using them as hinges. I rather like the look of the kerfs btw, so I will keepit as it is.

The round cutout is indeed a fan grill.

My son would go nuts with something like that. 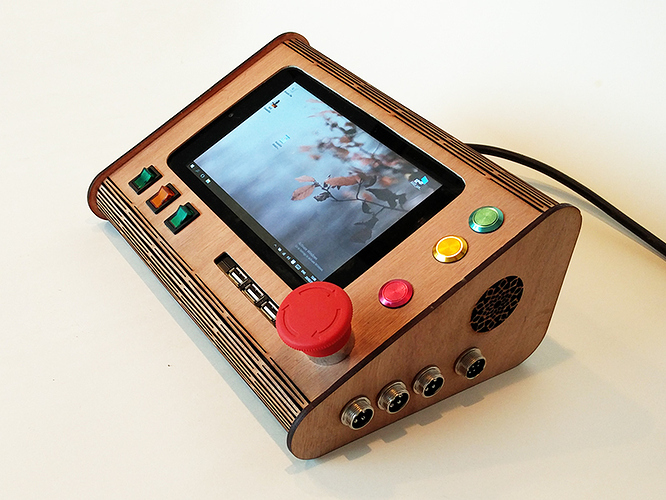 Looks great! Great job. I built something similar into the front of my cart a while back for my SO2 (now upgraded to an XCarve-ish machine), and its made things so much faster and easier. We even used the same buttons! 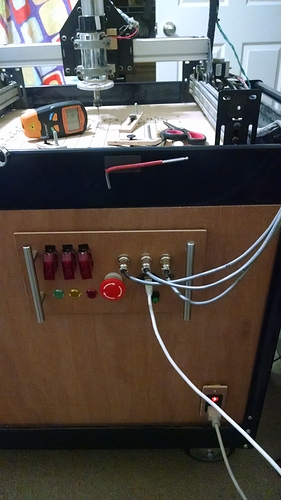 btw, project files are up for those who are interested!

Very nice! That’s a beautiful control box. Makes me think I need to slow down long enough to go ahead and get my controls cleaned up.