I was carving a new project and I have seen the following issue multiple times.

When I carve everything goes correct until the last few layers. the “counter clock” wise routing changes to clock wise routing but the bit does not follow the exact same path anymore.

I first thought it had to do because of the machine lost some steps somehow but today I saw that the start point was still equal to the end point where the bit stops after carving.

This can only be as the machine did NOT lost any step in any direction. this is very annoying as my bit sometimes breaks or if not my carved object is incorrect…

How can I be sure this does not happen and had any of you had the same issue?

It’s in the software, for me it happens on the last few passes when doing a through cut. I’m not sure if it’s a bug or feature?

I think this is an optimisation when doing through cuts and there are tabs. It saves time by not having to retract Z to the safety height, skipping the last tab, and then dropping to the cut depth again. When it does, there are no issues with not following the same path for me. It sounds like the issue is not so much with the path cutting, but machine setup. I know you said that the start and end points are the same, but there has to be something going on for there why the paths are not the same.

A feature I would not call it I find it annoying and not good for my bits.

A fix is needed as this is not the desired outcome.

@Zach_Kaplan any input on this Zach?

I’ve carved a 19mm thick part in steps of 0.5mm that is 38 passes. If my machine was off it would not go through 30 passes 100% correct and suddenly change that. and I can repeat it. next time the first 30 passes are good again…

The issue is always when the route is changing direction… I got a picture to show the problem beter but I didn’t found how to upload it to the forum.

just drag and drop your picture in the message

If you share your project, provided it’s not too big and I have the right size bit, I would be happy to cut it. I still believe that it is probably machine setup, possibly belt tension that is causing the issue.

Is it only when doing the cut through with tabs is it reversing direction ? 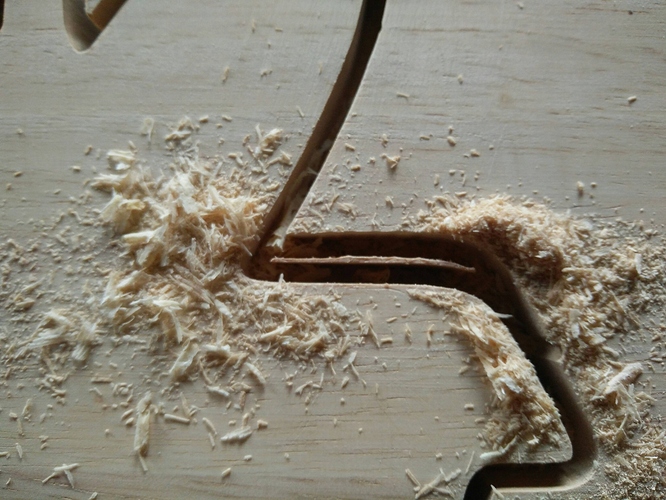 this is the result.

yes it is changing direction…

the easel project is http://easel.inventables.com/projects/a2hxN6SE9SW4mOi_1TqdrA

it is not that big, it is a flower for the nanny who took care of our 2 boys, she quit being a nanny and we wanted to give her the flower as a thank you. I would have carve the names in the lower part but that is not the issue…

Thanks for posting that picture.

That is off more than I would imagine for belt tension. Is this the only part of the cut that was not correct ?

I still think the issue is either belt tension or maybe a slipping pulley. But prepared to check everything, that’s just where I would start. I just cut your project, I had to change to 12mm as that was ll the plywood, and I changed to 1000mm speed and a depth of cut of 1mm. I also used a 1/4" bit. The project cut fine. 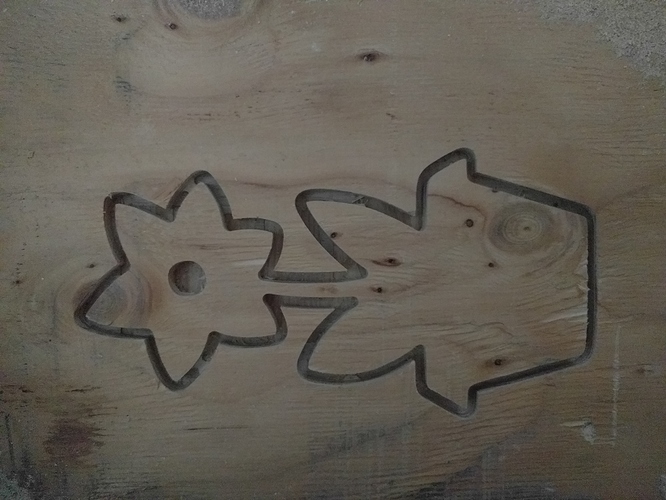 I do not understand why this would put more force on the bit? It should follow the exact same path as before (even if it turns into the other direction). Also I do not understand the fact that the stop point was spot on the start point. if my stepper motor has skipped some steps it would not have been spot on again… @Andy4us I indeed must acknowledge that you have done it correctly thanks for the run. My belts are as I assume they should be. But what is better, a very tight belt or a slight lose one? and how do you know if on the Y ax both are as tight as the other? Maybe that could be different…

With your router off and disconnected from a power source (for safety), hold the bit with your fingers and see how far you can deflect the bit. If it deflects easily, your issue is likely loose Z axis V wheels.

I have seen similar issues to yours when a cheap router (Dremel type) is used and the plastic bearing housing has worn enough to allow bit deflection.
John Champlain
www.picengrave.com

I think too tight is better than too loose. What I think is happening is that with cutting, the router is moving slowly and any slack in the belts is moved to one side. that is why it is cutting fine, when cutting going in one direction it is fine. Then, when it switches direction, most of the initial movement is used in taking up the slack, rather than moving the axis. I think that is why it is very off at the point which it changes direction, at a tab, but not so off as it keeps cutting as it works the slack back off.

An example of this is in this youtube, https://www.youtube.com/watch?v=V9PSN6R-o4I , the bottom of the chain either sags , or goes tight depending if the engine is making power, or on the overrun ( yes I know about the rear suspension compression, but the chain will always have some slack ).

I was able to cut it at 300mm faster and double the DOC with no problems. Mine are set like a tight guitar string. When I did mine, I used a small cable tie to clamp the belt to the clamp, tightened one end all the way in, with the other end with the clamp at the end of the screw. I then tightened that screw almost all the way. In other words. I set the tightest belt I could by hand, and then used one of the screws to tighten it by an additional 20 or 25mm.

If this is happening only when it changes direction cutting direction and only in one axis, check the pulleys on the steppers and see if the little screws (M3?) are tight and/or seated in the flat on the shaft. If the shaft is able to turn a little bit, you may not see it on a repeating cut because the error will be repeated and may not be noticeable on a complex pattern like that without taking measurements. Once it changes cut direction, the error would be reversed and the remaining passes would be offset.

If you want to check without cutting, you can do the following:

It may also be potentiometers or belts, but I’d bet a Pepsi that it’s a loose pulley.