[SOLVED] 2D pocket cut about 1mm off even after multiple passes

Hi all,
I’m new to CNC milling and have been getting slowly in over the course of the past few months. Up until now I haven’t needed to do any precision work. Now that I am attempting some precise cuts, I’m encountering an issue.

I’m doing some simple 2D pocket cuts that require precision of 0.1mm so I can snugly fit aluminum tracks in the resulting slot.

I did a very simple test with a slot 9.7mm deep and 19.2mm wide. I am doing test cuts in some scrap pine that I have laying around.

The issue I see is that the slot ends up being around 17mm wide after running the operation. If I run the exact same operation again the slot is widened by about 0.3-0.5mm. I ran the same operation 4 times in a row and ended up with a slot about 18.15mm wide (I go 18.3 on another test) as you can see 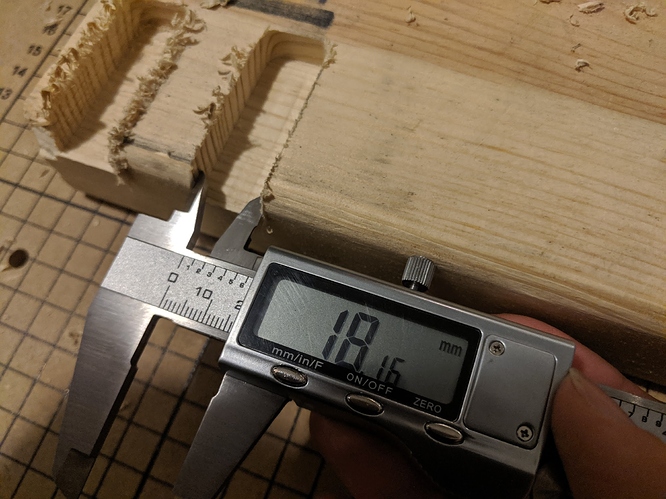 I can see how the first pass might end up off if perhaps the cut depth is too deep or the speed too aggressive resulting in tool flex. However on the 2nd pass I would assume that, having 1mm or less on each side for the 1/4" tool to work on, it should have no trouble clearing that away to a fairly precise cut. However the results that I see are that even after 4 passes there is still more material to cut away.

What should I look into for addressing this discrepancy? I poked around the XCarve to see if anything was loose and didn’t immediately identify any pieces which could account for this.

Thanks in advance for your help

If you jog 20mm, does the machine move exactly 20mm?

measure your bits, just because it says 1/8" doesn’t mean the ‘cut’ width matches. So…measure the cut width in a single line and use that as your bit spec.

Second, did you calibrate your machine? If you tell the machine to move 25mm, does it actually move that far more/less? Lots of calibration tips and videos can be found in the forums.

I can see how the first pass might end up off if perhaps the cut depth is too deep or the speed too aggressive resulting in tool flex.

First of all, all bets are of if the step calibration haven’t been fine tuned.

If calibration is good, your main cause is what you say about deflection. All machines have some degree of that.
Other possible reasons like actual bit diameter is also valid.
Backlash is another component, backlash = the travel “lost” when one axis change direction.
You can measure backlash by jogging one direction against a digital calliper. Say you jog to the left and zero the calliper up against the tool. Then jog 10mm in the opposite direction, the calliper may say 9,5mm travel.
Without touching, jog again 10mm in the same direction, it may say 10mm now, and the next 10 = 10 etc.
So the values may be 9,5-10-10-10-10
=> backlash = 0,5mm

For a pocket such a value may give 1mm of backlash defect.

To test accuracy of your axes use a known good ruler and measure over a long distance.
I recommend you do a brief 5mm jog in the direction of measurement in order to rule out backlash from the calibration steps.

Thank you, I did 10mm over short distances (I’ll try long next) and it seems to be accurate according to my calipers. I’m jogging then moving down in z with the router spinning so that it just grazes the surface enough to leave a point mark.
Doing this repeatedly both in a continuous direction and also reversing direction give me good results within less than 0.5mm according to my eye/caliper.

I’ll check more into overall calibration of the machine.

Thank you for the suggestion. I measured my bit and it measures at 6.42 mm (it is billed as a 1/4" bit which is 6.35) so it seems there is a tiny amount of discrepancy, although not enough to account for a full millimeter.

When I created the path i did set it for inside the design, but my assumption is that it would calculate the path using the edge of the tool up to the path. Is that incorrect?
I’m using Fusion 360 for the moment and when I preview the cut the simulation shows material being removed all the way up to the boundary of the slot.

If i choose a different setting such as on or outside, would that widen the slot by the width of the tool?

Thanks for the tips all.
I re-examined the gantry and on second pass I found some very slightly loose wheels that I tightened by turning the eccentric nut. After making this fix, however, I am still seeing the same result with a narrower slot than I would expect.

I’ll look into calibrating the machine, and I’ll also check into the suggestion that @RichardLeather made about toolpath in/on/out boundary.

This time I ran the machine and after the 3rd pass the tool doesn’t touch the wall of the slot on the finishing pass, which leads me to believe this could be a CAD problem. It seems the tool path is moving the machine to the outer most point that it has in g-code, but this is shy of the final intended width.

So it turns out in Fusion360, a 2D pocket cut does not allow an option for tool containment in/on/outside of boundary. That option is only available for 3D pocket clearing.

As you are doing the CAD and CAM in Fusion, make sure you dont have “Material for Rest machining” enabled, it defaults to 0.5mm radially and axially.

In F360 and 2D path you can only select inside or outside of path, but that is not done where you set Containment but by clicking the red arrow along path whichs flips it.

In F360 and 2D path you can only select inside or outside of path, but that is not done where you set Containment but by clicking the red arrow along path whichs flips it.

Thank you for the tip, I didn’t realize this determined inside/outside. However in 2D pocket clearing this isn’t available, instead I’m selecting flat surfaces to cut rather than edges. That is a 2D contour operation.

I am going to experiment with 2D contour as a finishing operation and see where that gets me vs. 2D pocket vs 3D pocket.

I have been leaving “Rest Machining” unchecked since this is the only operation I’m performing. There is also a setting for “Stock to Leave” which i have also left unchecked

It seems that 2D pocket, 3D pocket, and 2D contour operations all leave the slot about 1 -1.4mm too narrow.
For the 3D pocket, choosing tool containment in/on boundary seems to have no effect.

Inspecting the Gcode output it looks like the final finishing pass horizontal move is a distance of 13.150 on the x axis, which adding in 6.35 for tool width I would expect the slot with to end up at 19.5.

So it would seem that the gcode is being created properly. Is there hardware tool compensation that may be in place? I’m not seeing any telltale issues with basic movements that would indicate the machine is not calibrated correctly.
After running these operations the machine successfully returns to the same zero point, and executes the same cut each time.

I’m still confused as to where this discrepancy is coming from.

Here is the gcode I’m using to run this test if anyone can verify that it is correct.

This image shows a 10cmx6cm box that I cut by manually jogging in 10mm steps. I moved both continuing one direction and also reversed directions at various points. I was able to return to the start point and have no appreciable difference. The varying width you see in the image is due to the top layer peeling from the cuts.

Although this cut right here is done with a different collet and bit, I performed the same test with the bit and collet that have been in use when I see the offset issues. I got a similarly clean set of lines with a return to start point. 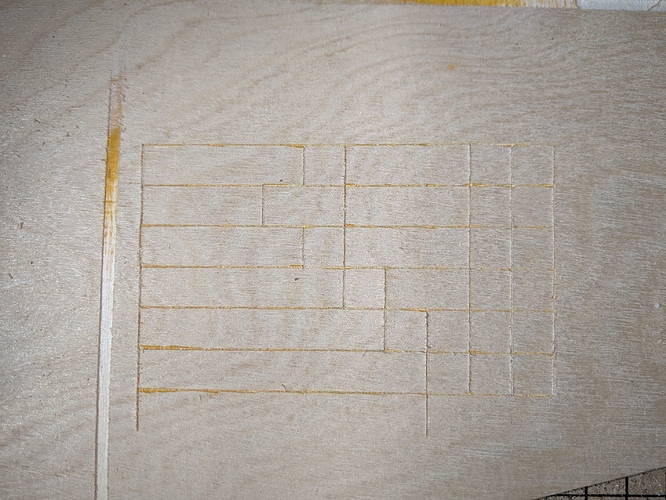 Here is a good test pattern for precision/backlash:

Yes it is, this model was the main reason to get a ShapeOko2. 762 grams in this stage for 1m50 span and detachable is something that is not possible with hand tools, the machine allows me to build with less wood. Then the machine became the hobby, I did some strength calculations and optimised my machine for balsa and plywood. The best upgrade was to make stronger V wheels for a SO3 type Z axis with an 8mm ballscrew (balsa is max 12mm thick) and full length support for the Y axis (6x100mm alu)…

I’ve solved the issue. in Fusion360 tool compensation was set to “In Computer”.
Changing this to “wear” and adjusting compensation to zero removed an offset that was in fact being put into gcode.

I verified this by stepping through the simulator and checking the distance values per step, and finding that they were about 1.25 mm too narrow for slot width.

Removing this compensation has resulted in a slot within 0.1mm of my target width, which should be good enough precision for my needs at present.

I’ve solved the issue. in Fusion360 tool compensation was set to “In Computer”.

Changing this to “wear” and adjusting compensation to zero removed an offset that was in fact being put into gcode.

Is this something you have entered/specified in the past?

Reason I ask is that I have never played with Compensation and its set to “In Computer” by default.
Not all tool strategies offer Compensation either so it is not something that is particulary apparent.

I have never intentionally set the compensation settings, so I’m not sure how they got set. Perhaps I input a value in the past when I was trying out different settings, but I am not sure if Fusion360 saves those to defaults.

At any rate, it is not a very obvious setting so it was tricky to track down since I did not know about this feature

At any rate, it is not a very obvious setting so it was tricky to track down since I did not know about this feature

Yes, hence my interest as I haven’t spent time myself in the Compensation section. I learn every day