I received my X-Carve earlier in the week and the assembly process has been going great! I have bumped into one small issue, however:

I have the X-Carve (1000 x 1000) with the ACME rod option, version 1 (ordered 4/13, it has the M6 nut on top of the pulley), and I have been having problems threading the Delrin nut onto the ACME rod. I’ve even tried chucking the rod in a power drill and pushing it down into the nut as I run the drill at very slow speed, but it seems as though the threaded hole is entirely too small. I realize this has to be a tight fit, but it doesn’t seem as though the threaded hole in the nut matches the ACME threaded rod.

Is it possible I’ve received the wrong Delrin nut for the ACME rod? Note the hole in the nut is being enlarged as I’ve attempted to run the rod through the nut with the power drill.

Has anyone else run into this problem? Thanks … 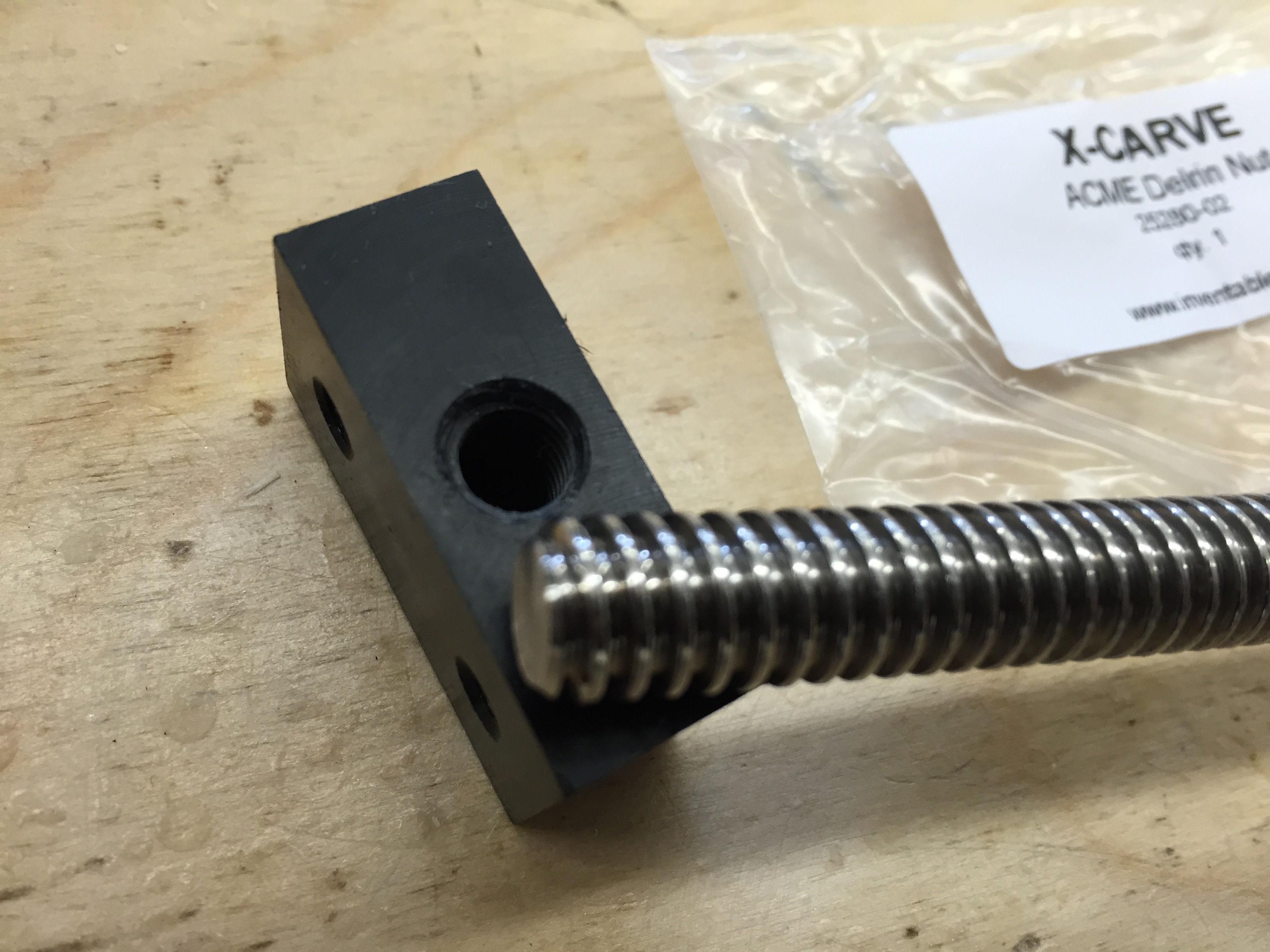 Can you get a flashlight and small ruler in there and count threads?

Maybe one got mixed up.

Or you can measure the diameter of the hole and check it against the minor diameter of a 3/8-12 acme thread.

Hi @GeorgeWesolowski I am so sorry you are having this problem. We think that during one shift the person doing Delrin nuts for the ACME put the Delrin nut for the threaded rod in the bag by accident.

It means there are somewhere between 25-50 people may have the wrong one. Please email help@inventables and we will send a replacement overnight.

We have already taken corrective action in the warehouse so this should not happen again.

We have already taken corrective action in the warehouse so this should not happen again.

Cement shoes and a one-way boat trip out on the lake?

We are in Chicago…the Yakuza would cut off fingers.

And, @Zach_Kaplan and Inventables staff, thanks so much for the incredible customer service! You guys (and gals) are the best …

Yep, same thing happened to me about 2 weeks ago when I picked up my unit. Lucky Inventables is local so all I had to do was make a trip into the city to make the exchange.

FYI - Received the correct Delrin nut yesterday and installed it with no problems.

Thanks again for the prompt fix …

Hi there
I have the same problem; I am from Romania and I bought the X-Carve fron GB (Robosavvy)
is there any posibiliti to recive another one?
Thnak you!