I’m finished with the Y-Axis step and about to start the Belting section. The frame at this point is incredibly un-square. Only 3 of the 4 “front” plates are touching my level table.

Should I try to square this up before continuing and if so, how?

Check out the tuning video

Adjusting the pulleys is going to straighten the frame out that much?

It should sit flat

So how can I fix it then?

Is the MakerSlide itself bowing?

I would suggest loosening all the screws holding the frame together at the corners (without the waste board installed) and see if it will lay flat then re-tighten the screws. If its flat at that point your done but if it warps again after you install the waste board, problem solved… just let the board sit unbolted to the frame for a day or two to acclimate itself to the environment. This is all taking into consideration that the table its on is level as well.

I would suggest loosening all the screws holding the frame together at the corners (without the waste board installed) and see if it will lay flat then re-tighten the screws.

Haven’t gotten to adding the waste board. As I said, I am at the step before belting.

@baldengineer is the MakerSlide bowing?

Is the MakerSlide itself bowing?

Visually, I can’t say, so I did this test with my level. I don’t have a square with me at the moment.

I put my level on the table itself, in parallel with the maker slide. Then I looked at the “left”, “center”, and “right”. This gave me a reference point for the bubble, which is (as best I can tell) always in the same location: slightly off center, 1 degrees to the right.

On the “good slide” if I put the level on any of the sides of the slide, the bubble returns to my reference point in all 3 locations.

On the “bad slide”, on one “side” of the slide, the bubble is significantly off in 1 of the locations. The bubble is 3 degrees to the left of center.

So I think that indicates this slide has a bow in it.

Would anyone else agree?

I’m not sure I 100% understand the test but if the MakerSlide is out of tolerance email help@inventables and they will send you a new one free of charge on Tuesday (Monday is Memorial Day).

No I don’t agree, but I don’t really understand what you’re testing there with the level. A level bubble tells you if something is level. If you’re looking for a bow or twist then you need to use a straightedge (for bow) and a square (for twist).

If you can’t take a picture, maybe you could find one in the instructions that shows where you are at in the assembly process and link to it here?

In an attempt to salvage the weekend (2nd one lost to this project), I finally got around to unwrapping my waste board. It’s cracked and appears it took an impact on one of the corners.

I doubt it was shipped that way, so I’m guessing the box was dropped at some point before I got it. Shame on me for not fully unpacking when I received the kit. If I had removed the plastic, I would have noticed this sooner.

One corner of the box itself does look slightly more distressed than the others, now that I’ve removed the waste board.

Here’s what it looks like since I don’t know another way to clearly photograph the issue:

That said, here’s what I was doing, in the absence of a square.

I used the level to verify my table was (relatively) level. I checked it in 3 places (but only show two in the pictures). Top is just to clearly show where the level was relative to the slide. 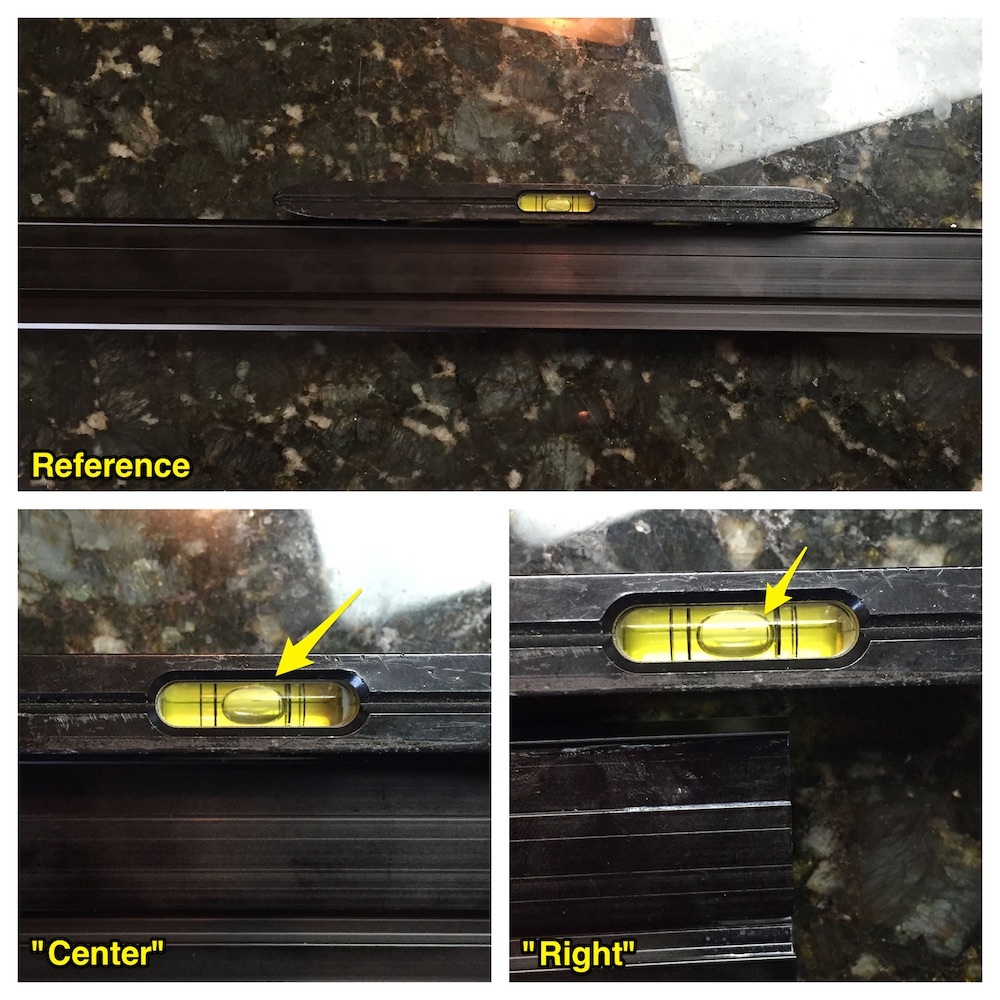 Now I put the level on the maker slide itself. My assumption is that any bowing or warping of the slide, will translate to a change in the measurement. 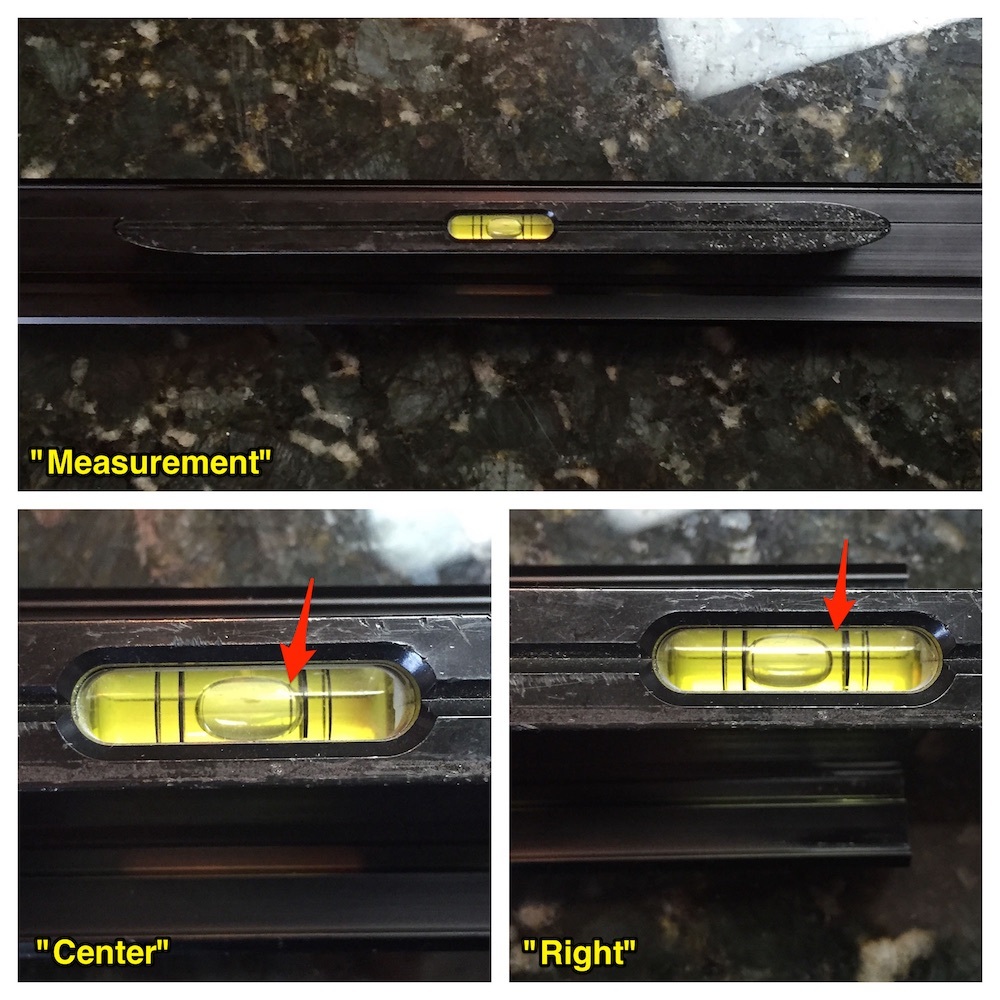 Note, if I remove the two 20x20s, the machine still has issues.

OK, I can see what you are doing now. I don’t think that little torpedo level is the right tool for the job, but I’m not an engineer…
If you want to check for bow or twist you should find something flat and almost as long as the piece of makerslide itself. Or just unscrew it from the rest of the assembly and use the granite surface as a straightedge to check it.

Did you measure the two Y-axis pieces to see that they are parallel to each other? If you screwed them off just a bit that would twist it out of square andpull up a corner. You can check by measuring the distance from front corner to front corner, back to back, and then across. You could also measure the distance between those corner brackets. If it’s not exactly the same on both sides, that would twist the assembly. A few minutes with a tape measure will tell you a lot more than that level is.

Did you do as someone above suggested and loosen all 8 screws holding the four pieces of the square together, shift/push down until everything is flat and then retighten? If a straightedge (on that one piece of makerslide that is sticking up) doesn’t show a bow, then my bet is that it just isn’t screwed together square and that loosen, shift, tighten will fix it.

use the granite surface as a straightedge to check it

I can definitely see a twist in the “bad” rail when compared to the “good rail”. Gap is big enough to see but smaller than what I can probably measure.

I’ll also pick up a square that’s small enough to double check the gantry, might as well since I have the y-axis rails off anyway.

I’m really sorry for the problems you are having. It sounds like your box took some serious impact during shipping. If the rail was bent and the corner of the board was damaged it must have had quite a blow. To crack the board would take some significant force. Each board is inspected, card board corners are added, and then wrapped tightly in plastic during the packing process.

Please email help@inventables so we can make a formal claim to UPS and get your replacement parts sent out.

Thanks for the help (and support) from you and your team Zach.

Replaced the maker slide and it is sitting quite level.