Last night my dewalt dwp 611 shit the bed, led lights turn on when the switch is set to the “on” position, however the router does not turn on.

I see I have 2 options on remedying this issue.

Or purchase a Chinese 800w spindle

I was wondering what the benefit of the vfd spindle?
Or any other spindle options?

And which one is better, liquid or air cooled? (Not a problem to run the required hardware for liquid cooling) 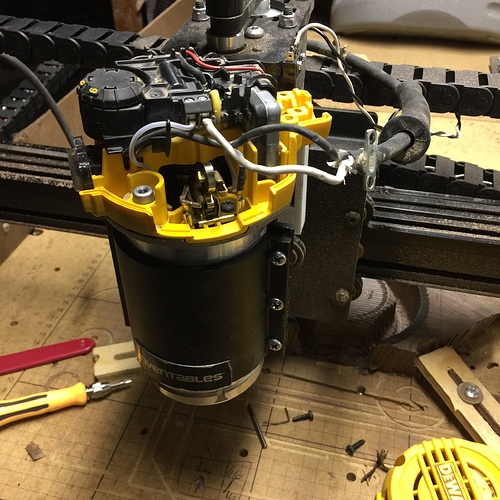 I have an 800W water cooled spindle on my 6040 CNC router and it works very well. It will fit on the X-Carve (65mm diameter body) but I haven’t tried that as yet.
It’s very quiet in operation, uses an ER11 collet so can take a range of bit sizes up to 7mm.
One advantage over a router is that there is no fan blowing dust every where, a problem I have with the Makita router on the X-Carve.

You can buy drop in brushes from Amazon. They last about 180 hours based on what I have read on the net.

I’ve already burned some out. 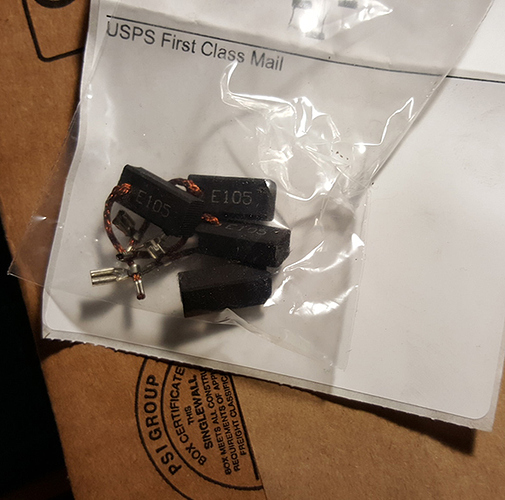 Yep, blow the dust out and replace the brushes. Get someone who knows what they’re doing to assist and I know it’s obvious, remove the plug from the power supply first…

i took the brushed apart, and cleaned everything out. However the brushes look like they have plenty of life left. i dont think that new ones will solve the problem.

Did you notice any black dust on your work piece that looks like powdered graphite?

i noticed that, on my air diverted on the bottom of the unit (have since removed it), it was a white 3d printed piece, that had accumulated some black dust on it over time.

that dust is material wearing off the brushes. They start breaking down when they are worn out. When new, there is no dust.

fair enough, just ordered some. was worth a shot. thanks

Francesco, one other option that you can try to see if the router is burnt up or if it is just the electronics.

I removed the electronics from my unit, all except the power switch. I ran a new power wire through the drag chain and another 4-wire stepper motor wire that will eventually power just my LEDs. (Right now my LEDs do not work.) I left the power switch to turn off the spindle during bit changes as a safety feature.

Pretty much all that needs to be done after the stock controller is removed is to connect the black and the white wires inside the router with the new incoming power wires (there is no green (120v ground), only a two wire 120V hookup). I replaced the stock power cord bc it was too short to run through the drag chains on my 1000x1800 X Carve.

I removed the electronics and performed this modification. The minimum speed is still probably around the same as with the factory controller. But now I have a Manual speed control for my router that is not attached to the spindle. This will allow me to dial in the speed by ear While the machine is cutting. Not too scientific but by my understanding many older machine operators used to use this method to determine speeds.

I want to also point out that I have not made one cut yet with my X carve. I just finished putting it together and setting it up. I was in the process of calibrating my machine when I was pulled away. So I have not fully tested this new arrangement yet, but I do not see any issues when testing the spindle Under no load.

Also remember that you are dealing with dangerous voltage. So if you do not feel comfortable performing this modification, then don’t do it. Make sure all power is shut off before proceeding.

This of course is an option that can be tested on your 611. If it was just the factory controller that malfunctioned, then this will most likely get you up and running again.

that’s also a good idea, i will try that tonight.

You can take it to the Dewalt service center and they will fix it for you.

can I ask how long you were using your 611, and what speed setting you typically had it on?

used for about 2 weeks, (however i bought my unit used from a pawnshop, it looked brand new), speed was set to 2 (3- for one job), running for about 3-4 hours per job. It served its purpose, i guess i was mainly looking for an excuse to upgrade to liquid cooled spindle. I am still going to attempt to fix it/take it to a service center.

If you run about 3 hours per day, you’ll get a couple months out of a set of brushes. I burned up my first set in about 2 months.

I contacted Dewalt for warranty repairs and they had a 3-4 week lead time and couldn’t guarantee it being done in that time. I just consider the brushes a consumable like bits and factor it into costs.

As a side note, I did some research.

Most of the Dewalt consumer tools are now made in China and the quality is down a bit. The contractor grade tools are still assembled in Mexico from higher quality parts made in North America.

14 days x 4 hours of use per day is only 56 hours of use. If it had been a new unit from Inventables we would replace that immediately as it would be unacceptable. Since it was a used unit we don’t know how many hours were on it before you bought it. I’ll defer to the service center.

faulty speed controller. will be replacing it with the harbor freight controller as suggested in this thread for now.

Please let us know how it works out for you as well. I like my upgrade. And for $20, I won’t complain.