I am sorry to start a new topic over this, but there’s just too much information in all different threads. I need to get some clearance… Newbie ànd woman ànd Dutch on what seems to be an experienced users American men forum

I should be able to answer most of these questions tomorrow when I expect to receive a DeWalt mount (My standard spindle died also) . My DW26200 arrived this morning. I had understood that that the DW26200 was identical to the DW611.

That would be great, Robert!
I hope it works out for you! (And for me too

Angus,
I have just put a caliper across my DW26200 and I reckon it is between 68.8mm to 69.1 (the variance could have been down to my hand shaking with the prospect that I had bought the wrong unit lol).
It seems quite a bit heavier than the standard spindle. 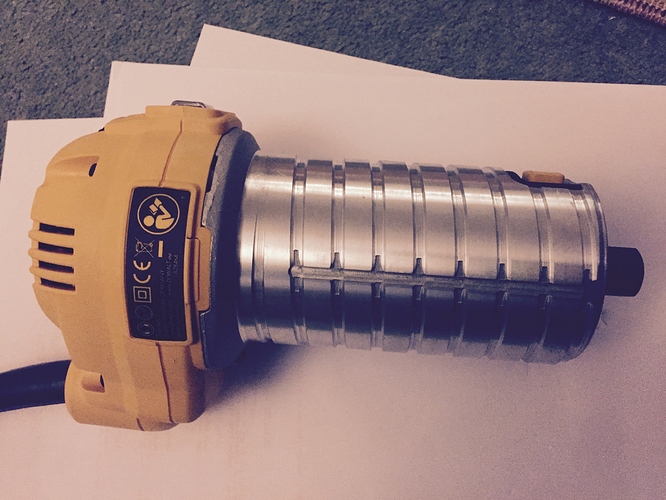 Heleen, I found Inventables customer service to be excellent. When I told them that I thought my spindle was failing (it needs a finger flick to get it going) they immediately offered a replacement or a different mount.

If you want cheaper way to do this, you better stick with 661 mount, if it’s a little bigger on outside diameter, you can pray open the 661 mount it fits. But when you’re saying you’re in 220 world, you have lot better altenatives then we have in 120 world. Just go either Amazon.com or Ebay.com, and say 220 CNC spindle. Your head will spin.

I am using a Makita 220V router with a 3D printed dust shoe… Works great! 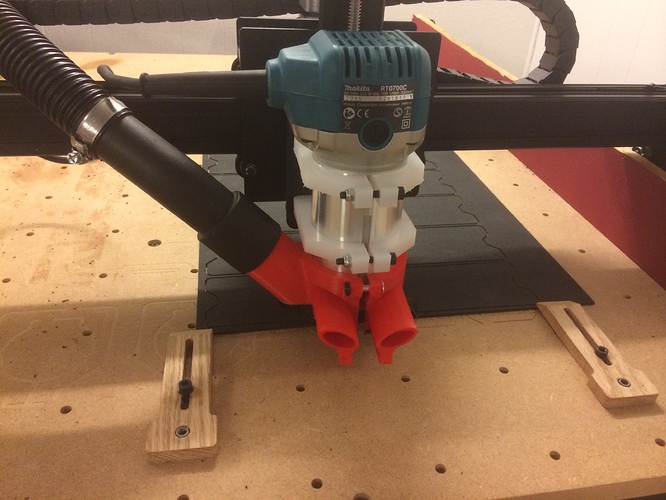 For the additional weight, If you have NEMA 23’s and not 17’s you should be okay…

As for the bits/endmills, if you using anything in the 1/8" and smaller range (shank diameter) then you need to get a collet kit. For example the 611 has a collet for 1/4" I’d advise not getting a collet reducer and get a proper kit that uses ER11 or ER16 collets.

As for loudness of the 611. At full power It’s pretty damn loud.

Increased cutting speeds is a fine balancing act of spindle speeds and feed rates. As in are you steppers able to reliably able to provide the feedrate for higher spindle spindle. ii.e. I have NEMA 23 (425oz-in) and matching external drivers. I am able to blow thru hardwood at around 2575mm/min. And with the additional ‘oomph’ on the Z access, I can plunge faster.

(My machine is a heavily modified Shapeoko 2)

hi john, did you print your own dust shoe and make the mount? looks really tidy, my set up for makita is bulky and messy

The dust shoe is from here: http://www.norwegiancreations.com/2014/08/an-open-source-cnc-dust-shoe/ - it is open source, I used www.3dhubs.com do allocate a printer near me. I have modified it with a duct tape skirt for now, but I have a brush-list on the way.

I cannot remember where I found the mounting brackets, but I have shared the plans here: http://easel.inventables.com/projects/Gx_2V89Z6zf3zUCig7zNKA - They are made with HDPE.

It is mounted on this: https://www.inventables.com/technologies/spindle-mounting-plate

For me, its an entire “new” machine now, with incredible power.

Hi Robert, how did it all turn out?
Does the machine fit the mount? Does it work well?
And how about the noise?

Heleen,
I’m still waiting for the mount to arrive…it took 2 days to reach the UK from Chicago and yet 4 days later it hasn’t managed to travel 120 miles from Heathrow airport! Frustrating is not the word!!!

Helen,
I have finally managed to get hold of the DeWalt mount and installation was remarkably simple.

The DeWalt DW26200 slipped into the mount very easily. It is not as noisy as I was expecting and as others have said the blower on the router does spray the dust around.

Hi Robert,
Any updates on your experience with the DeWalt?

Customer Service sent me a new spindle and a mount for the Dewalt 611. Today I have installed the new spindle, but it the first two carvings I did were just as offset… Really frustrating.
So now the nost important question is: Does the DeWalt stay on track?

Does the DeWalt stay on track?

Mine does. I do not have an signal noise causing the stepper to move when the spindle is on.
However, it is a lot heavier so you need to readjust and tune everything. Check your v-wheels, especially on the X axis. They may be too tight with the new load.
Also some kind of stiffening mod is needed. The gantry will twist noticeably with the extra weight. After I did my stiffing mod I saw a huge increase in quality.

And now I am going to scream. One of the belts broke!!!
I think that was causing the offset carving… pfff…

Heleen
Commiserations on your broken belt. Did it just snap or is there evidence of wear ?
Because it takes a week for anything to get to the UK from Chicago and because the UK distributor does not carry any spares I think I’ll order a few bits and belts as a precaution.

I have spent most of the time since my mount arrived grappling (unsuccesfully) with UGS and Chillipeppr. I have had a play with VCarve which I like, I just can’t do anything with the output!

One of the belts broke!!!

When you get a new belt check that the pulley and idler wheels are lined up properly. Mine were not ant it was starting to fray my belts before I caught it.

If your Belt snapped close to Holding brackets, you can release back brackets, bring’m closer to front, then attach belt back to front clamp. I don’t thing you go all the way back of the machine to carve anything. If Belts breaking, there is something wrong either too tight or your motor pulleys not centering the belt. If belt rubbing against motor pulleys walls, friction breaks it. You may want to release set screws and make it centered. Good luck.

I have spent most of the time since my mount arrived grappling (unsuccesfully) with UGS and Chillipeppr.

You want to start a new thread? — I’ll try to get you going with UGS.