Yesterday I experienced mi first disaster.
During an unattended run (I left the x-carve working while going to dinner) the spindle mount exited from the bottom side of the z carriage.
This caused the spinning spindle to fall on the material, drill though it, break the bit and drill through the wasteboard.
Obviously the drilling was not clean as the program continued trying to move the bit on the defined path, and when I came back I found burned pieces of wood, thick white smoke in the workshop and a blackened bit collet (which I could not detach).

Unfortunately I did not see how this happened.

I’m new to CNC, but except breaking two 1/8 bits previous runs were all quite good.

Did anyone experience anything similar?
How did you solve it?
Would you advise closing the bottom of the z carriage by attaching something to avoid wheels exiting from the rails?
Is there any way to detect similar failures and stop the maching from damage?

Is there any way to detect similar failures and stop the maching from damage?

You can use homing and soft limits.

Is there any way to detect similar failures and stop the maching from damage?

Soft limit will prevent the machine to move outside its range - provided no steps are lost in the process.
Soft limit require homing to be enabled.

Hard limit (physical switch on each extreme of all axis) will help in a run-away situation. You could add a switch below the spindle mount too which would trigger if it move too low/exit carriage.

Soft limit or hard limit (default usage) would not have stopped what you experienced.
You could connect a smoke detector to a relay which could cut power if smoke is detected.

Bottom line - No backup system is perfect.
Never leave the CNC running unattended / monitored and have a fire extinguisher accessible.

It could also be worth while to review the surroundings of the CNC - in case of fire that there is nothing around it the the flames can migrate to.

Do you still have the boxes that the X-carve came in?

the spindle mount exited from the bottom side of the z carriage.

Did the nut and pulley come off the Acme screw?
Any photos?

If you are careless with depth settings and such, you can run the Z axis down too far and the bottom Vwheels will come off the makerslide and wreck havoc, which apparently the OP experienced and hopefully learned a lesson to not go eat dinner and leave a power tool running unattended.

I surely learned the lesson.
The thing is I’m quite confident I did not use wrong depth settings. Part of what I was carving actually came out as desired, so I think that when it moved on to the next part something moved, maybe the material, and from that point onwards the sequence was wrong.

Yes, I still have some of the original boxes.

Collet and what remains of the pin are still screwed on the router. So blackened that I fear I’ll never be able to detach them. Sorry for the bad picture quality 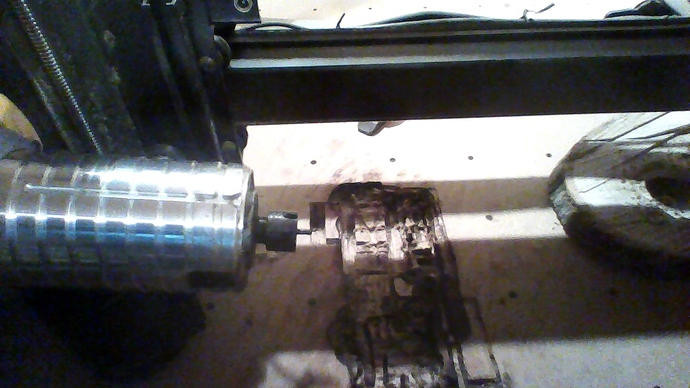 The nut, pulley and screw near the z belt are still attached, but now when give a Z+ or - jog, the pulles turns without making the screw turn. Acme is still attached to screw. 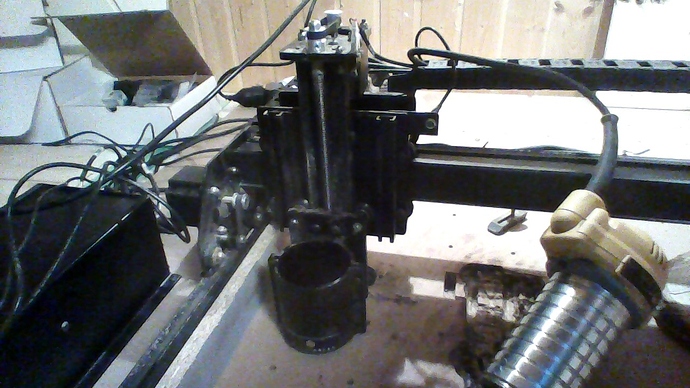 The z mount bottom wheels went down too much.

I have found that one of the small set screws that hold the pulley to the head of the leadscrew is now lost
(this picture is from the instructions, http://x-carve-instructions.inventables.com/1000mm/step2c/4leadscrew/) Replace with M3 socket heads. I think 6 or 8mm length. You can get more torque and see them better.

Thanks for the tip. I’ll try it and post the results here.

Do not forget to use blue Loctite!!! 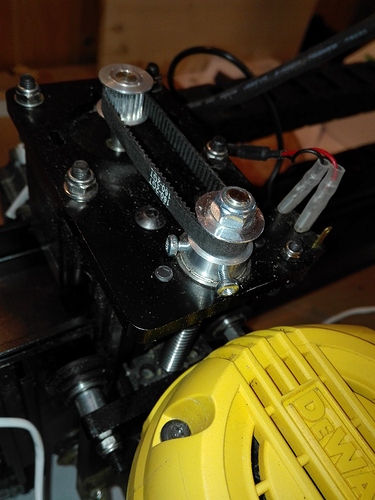 Thanks again to everyone.