Boy, I’ll tell you, if there’s one piece of advice I’d ever impart to somebody looking at buying a CNC machine of any type it would be…get a dust collector at the same time! I thought I’d be able to get by with a hearty shop vac sort of set up, but it just wasn’t cutting it. I’ve never seen such mountains of sawdust out of just a few projects (and MDF is the worst!). I ended up ordering the Shop Fox W1826 system off Amazon and it’ll be here in a couple of days. I’ve decided against going with any sort of dust shoe for now, however. I’m either going to build a wood cabinet to enclose the x-carve (and run the dust collector hose inside), or I’ll just overturn a big cardboard over the machine and give that a go.

I got one of these: Just as good as the Shop Fox, but less expensive.

I agree, the HF 2hp does an excellent job. I upgraded the filter bag on mine to a 1 micron filter so now the air in my shop is cleaner than the air in the house.

Yeah, did the same thing yesterday with a Harbor Freight Flyer coupon. 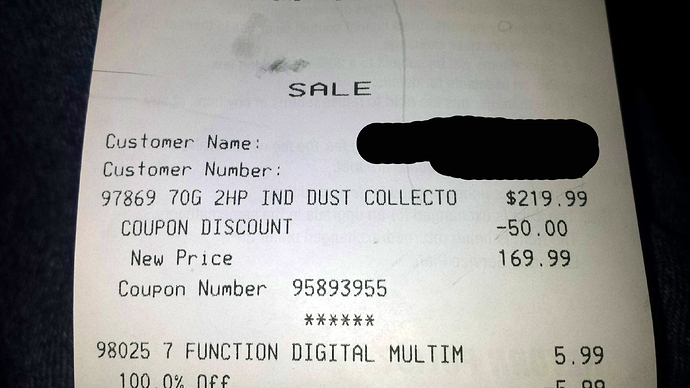 The only thing you really have to be careful of are the instructions. They aren’t very good and it is possible to use the wrong bolts in places.

You have that right! After about 10 minutes of frustration I tossed the instructions in the trash and put it together in a way that made sense.

That coupon is good through today - http://www.harborfreight.com/extra-savings.html

Looks like a pretty good deal. I went with Amazon primarily because I’m a prime member and can get it here in 2 days with free shipping. Can’t wait to get the darn thing hooked up. The dust had become so bad that I’d basically stopped carving for the past couple of days. I was tired of turning my garage in to a cloud dust and chips. Don’t think my wife was too pleased either.

Have any of you come up with a good place to get rid of your chips/dust? I dumped out my absolutely full 5 gallon shop vac yesterday. I’ve heard several people say that it doesn’t work too good, but I took the chips and put them in a paper shopping bag and then just dumped them in my backyard fireplace. They burned really good when I used some dry firewood to get it all going.

Some wood species and their associated chemical treatments can be hazardous when burned, so you have to be careful. The good thing about the dust collection system from harbor freight is that everything goes into the lower bag, which is replaceable. So when it gets full, or nearly so, you remove the bag, and seal it up. Replace the bag and take the old one to a recycling center.

Make a dust shoe! I can picture dust getting all over everything in your inclosure. Motors, belts, wiring, wheels, everything. I don’t see any kind of dust collector getting all the dust unless it pick’s it up right at the source…the bit. I get absolutely next to zero dust with my dust shoe, even with MDF. Just my thoughts on your idea.

Thanks for the advice, Jeff. You may be right, but I’m one of those people that sometimes can’t grasp a failure of an idea until I try it myself.

I do know there are a lot of people out there using enclosures of some sort, so there must be some decent rationale behind it. I was thinking of mounting the dust hood at build plate level on one end of the box, with an open hole in the box on the opposite end at the build plate level. This should create a strong “crosswind” of sorts right across the stock surface and should suck everything pretty effectively in to the collector. That’s my theory anyway.

I’ve tried a couple home built dust shoes (I have a 3D printer as well so they’ve been fairly easy to try), but I just don’t like having the router bit obstructed from view and I also don’t like that you lose some carving space with some of the designs. I’m hopeful that an added benefit to an enclosure will be a decrease in noise. My daughter has her bedroom right above the garage where I use the x-carve. I can’t do any projects in the evening once she goes to bed because it’s just loud enough that it keeps her awake. Maybe an enclosure would help that (but then again, maybe not).

Anyone have experience with this one?

I looked at that one. But I like the idea that the filter bag and the dust collection bag are separate. Also the larger unit has a 2 HP motor, vs. the 1 HP motor. The smaller one has the advantage of not taking up as much room, but that wasn’t a consideration in my case.

You would need to add a cyclone separator, so unless you are super tight on space, the 2HP unit is a much better machine and is about the same cost as the smaller 1HP + seperator.

Thanks. Space is the issue for me… I’m stuck in the garage so floor space is a premium. Something I could mount would be ideal.

Just finished putting mine together. Fairly simple if you ignore all of the instructions. The English translation had better syntax than most Chinese instructions but the descriptions made absolutely no sense. Not a single step was understandable to me. I threw the instructions away before installing the first bolt. But it was obvious how to put the unit together so I walked away satisfied.

I re-orientated the motor on mine to save space. 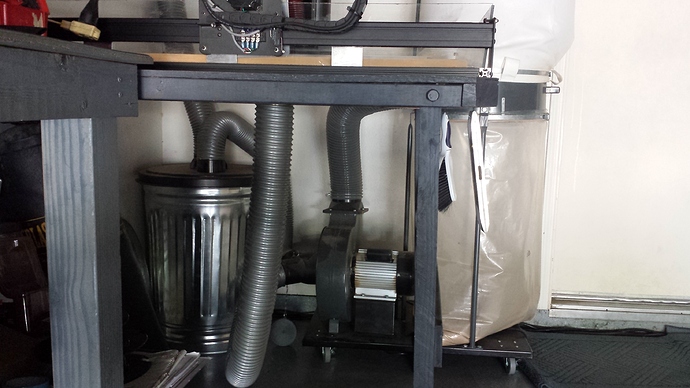