I’ve been wanting to dabble with CAM in Fusion 360 for quite a while and after some limited success with creating some 2D projects with it, it was time to try something a little different. I wanted to try something with curves in the Z-direction and had never used by ball end mill that has been sitting in the garaged for well over a year. This project was created just to learn how the CAM software works more in-depth, so not much time went into the design of the object.

First I found something similar to what I wanted to accomplish on Amazon, and made a 3D model based the pictures on the page. 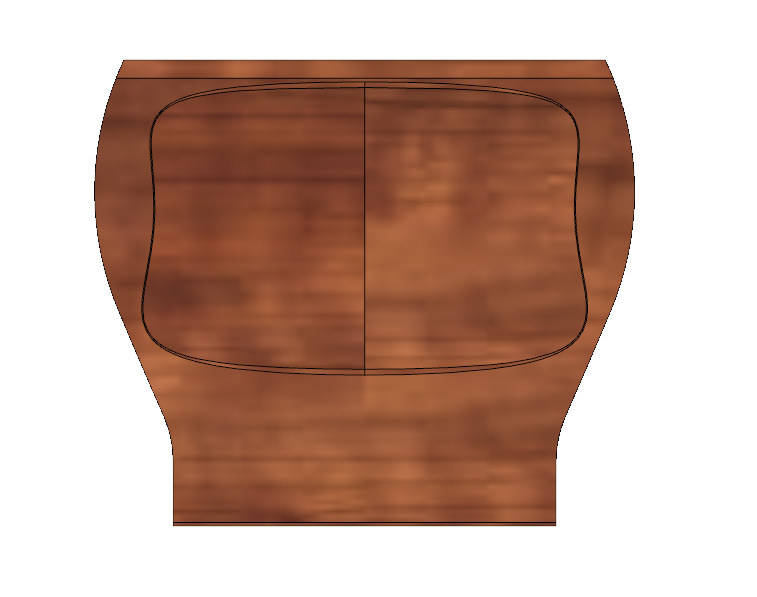 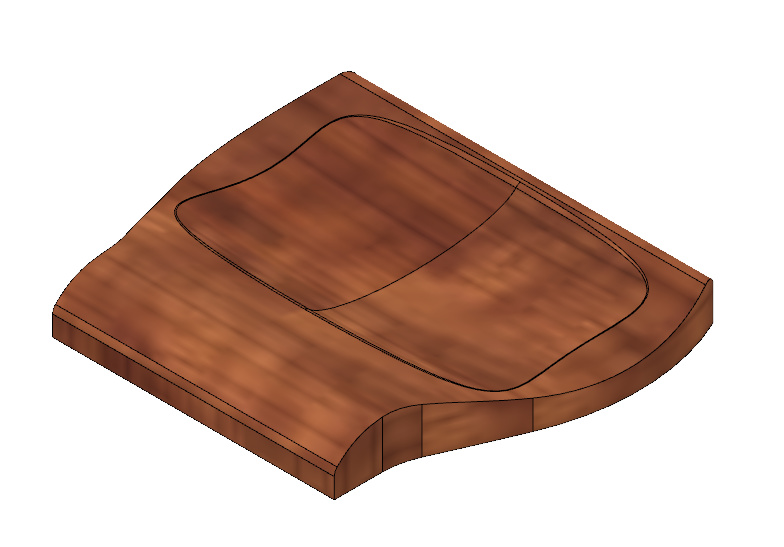 If anyone is curious how I made the dish kind of shape in the middle, I created an ellipse and then extruded it along a path using a sweep. This probably isn’t the most optimal way to do it, but I messed around with surfaces and sculpting for a bit of time and wasn’t really getting what I wanted. If anyone has any tips, please let me know. 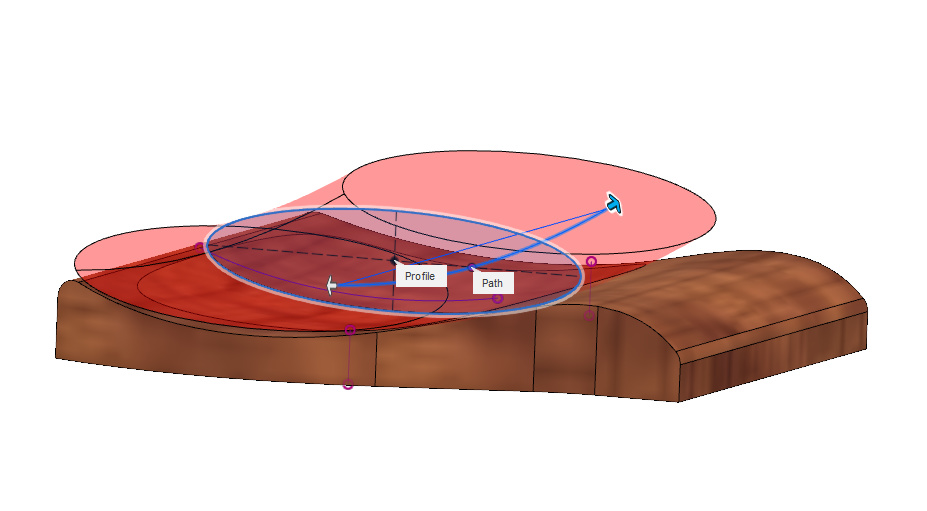 After all those shenanigans were settled, I went over to CAM and created a new setup. The center of the top of my stock was used as the Z-height reference.

I then went over to the stock tab and entered the dimensions for my stock as well as place the model bottom at the bottom of the stock. 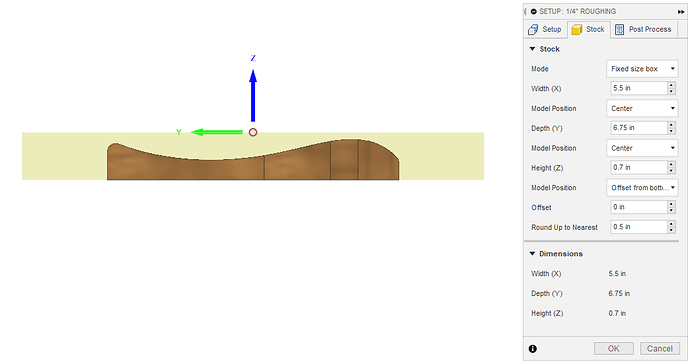 Then it was time for a facing operation. I chose facing from the 2D drop down menu and picked my 1/4" spiral upcut bit and left the default feed rates. 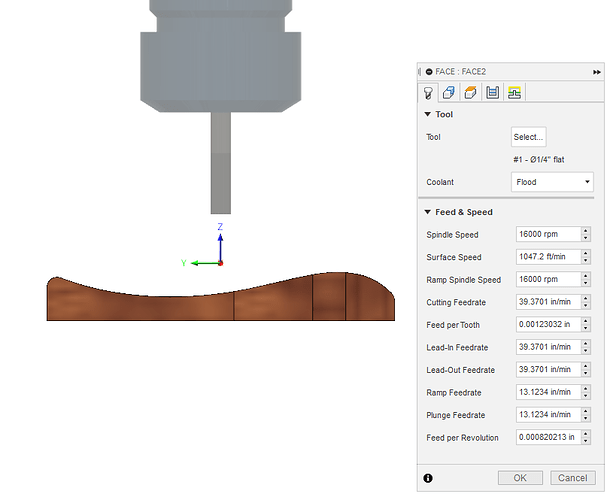 I didn’t mess with the geometry tab because Fusion picked the stock top for me. Over to the passes tab, I chose a pass extension of .25". What this does is extends the tool path beyond the stock so that the bit is coming straight on at each pass, and not transitioning to + or - x-movement on top on top of the material (not totally necessary). I then chose a step over of half the diameter of the tool and left the step down at the default of .04". Next time, I’d probably bump the feed rate up to about 70 ipm and go for a deeper cut as well. 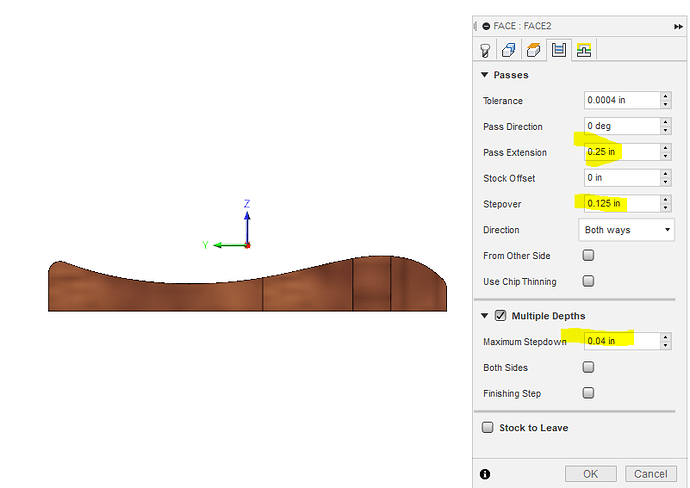 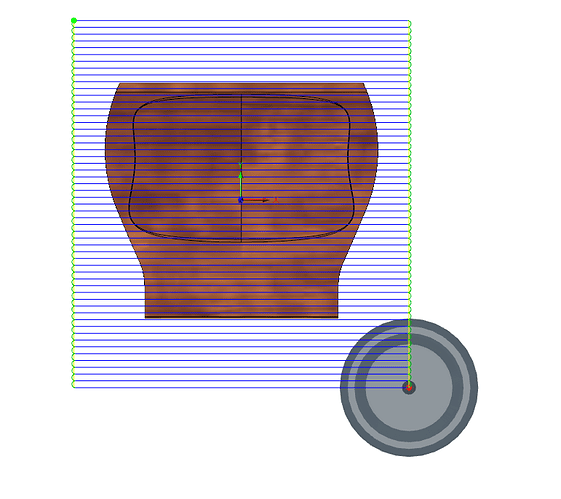 Next was the 3D adaptive. This one got out into the weeds a bit, mostly because I don’t really know what I’m doing, but so far so good. The speeds and feeds were the same as the facing op, and I chose to add an additional offset around the part because I wanted to try to take as much advantage possible of the adaptive tool path, rather than just slotting out around the part. Next time I’d bump the feed up to probably 60 imp. Rest machining from previous operation was also selected so that the software would know that the top surface had been faced off.

On the heights tab, I chose to offset the bottom height by .15". This prevented the adaptive path from cutting the part all the way out. 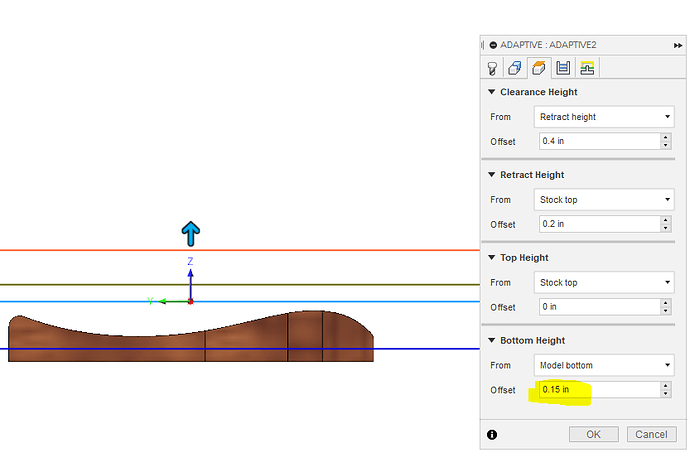 In the passes tab, I picked a .1" optimal load because, well why not, used a max roughing step down of half the tool diameter of the tool, and chose .01" for the fine step down. The fine step down of .01" was picked because I had watched some of John Saunders’ videos on surface finish. He pointed out that the smaller the step down here, the less stress the ball mill would endure. This small step down was a bit overkill for this project because I was using soft pine, but it’s about learning. Finally, I chose an Axial stock to leave of .02" and zero for radial. I got to these values due to the next operation which was the 3D parallel was doing some weird stuff that I didn’t really like. It was trying to use the ball mill to cut the outline of the part. Setting the radial stock to leave to 0 seemed to fix that. 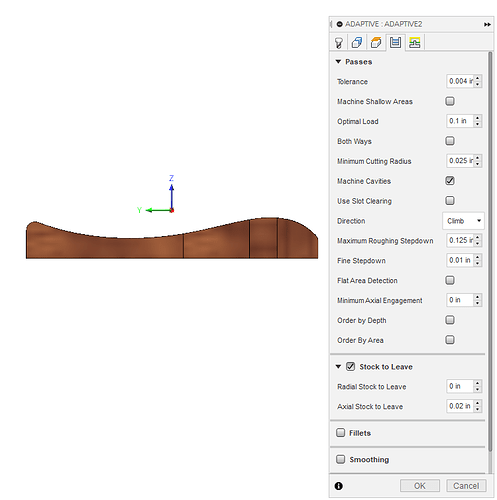 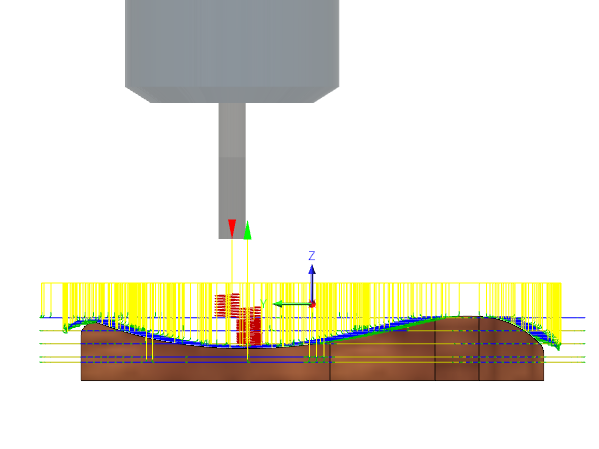 On to the 3D parallel, I chose my 1/*’ ball and left the speeds and feeds alone. I’d bump the speeds up next time because this op took very little material away. On the geometry tab, I chose to create a machining boundary and select contact point boundary. This seemed to help keep the tool just focused on the top surface of the part. Gain, rest machining from previous operation was selected. 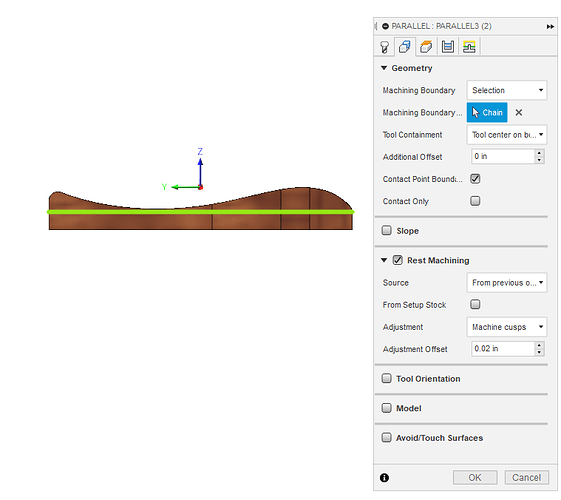 I chose a .2" offset form the model bottom on the heights tab. This is related to the issue I was discussing during the 3D adaptive that the tool path seemed to want to cut the part out. Now, I really fiddled with a lot of the options when I was scratching my head on this one, so I really don’t know if this helped fix it, but the part came out fine in the end. And you’ll see below that there was some pathing on the outside of the part 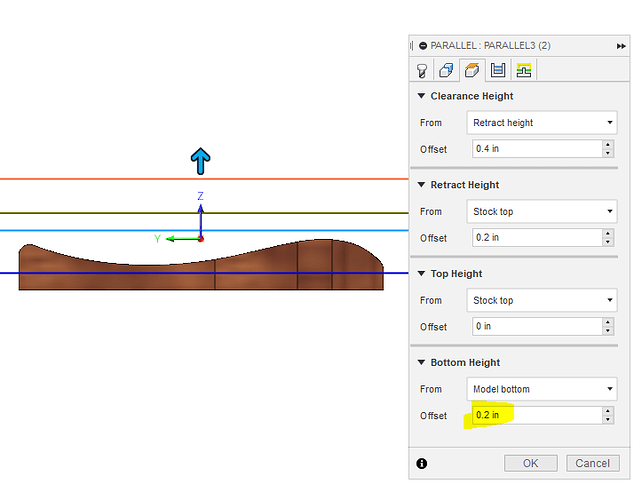 On the passes tab, a .01" step over was chosen to get a really nice surface finish and I turned smoothing on. Stock to leave was turned off. 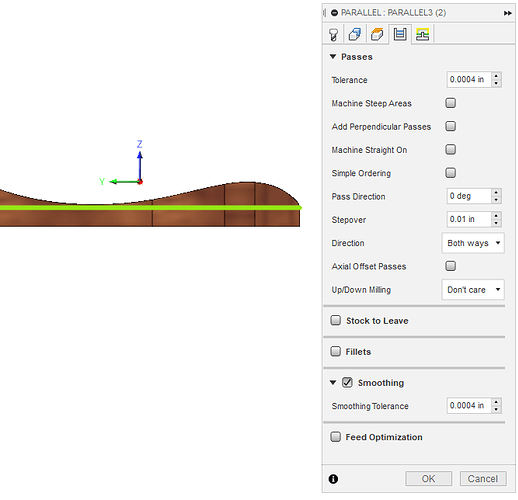 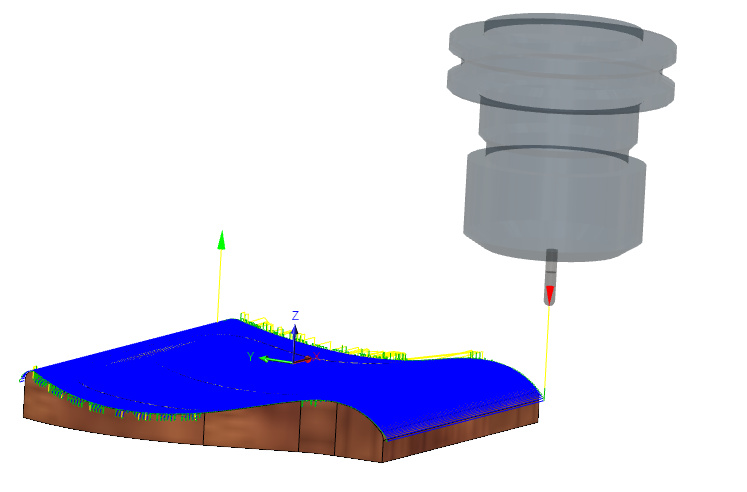 Now it is time to cut the part out. I used a 2D contour and went back to the .25" tool. Feeds and speeds were left alone and I chose the bottom contour of the part in the geometry tab. All other options were left alone. 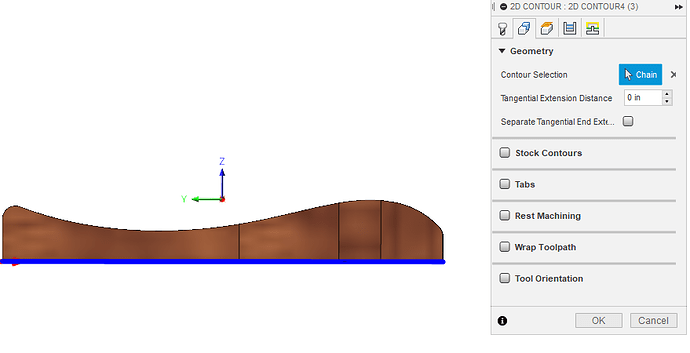 On the passes tab, I chose to enable multiple depths and used half the tool diameter. One finishing pass was chosen and I set the depth to the full depth of the part. This op ended up cutting some air for a minute, so this one could definitely be optimized. 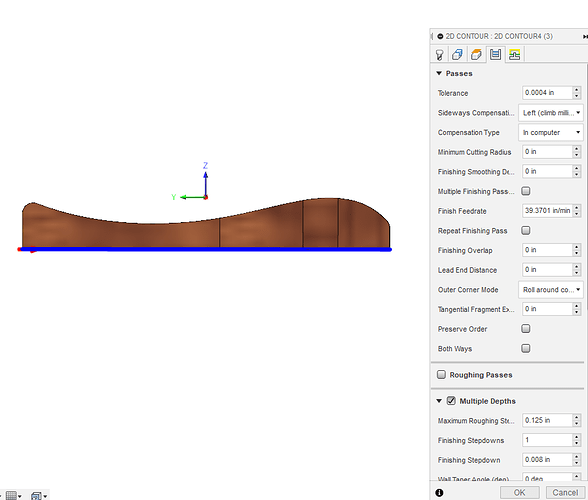 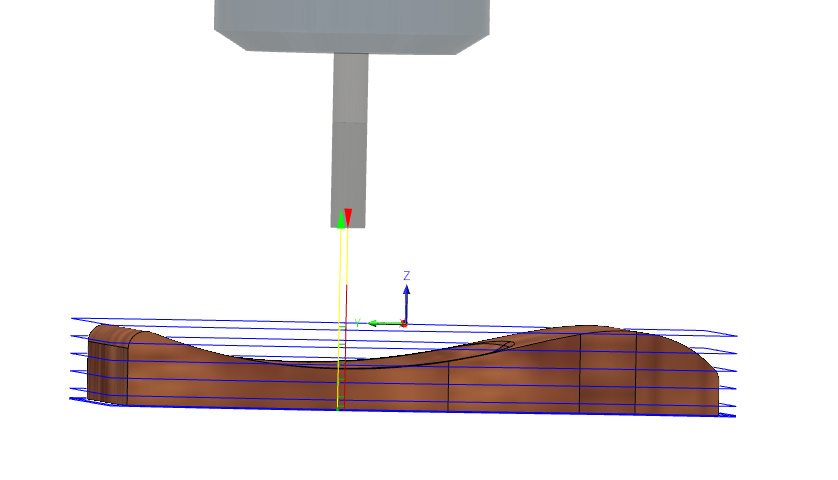 And off to the machine. I got my stock and used double-sided carpet tap to secure it to a piece of scrap plywood, which was secured to the waste board using clamps.

Easel was used as the gcode sender. Once I go the machine all setup and my bit in the middle of my stock, I had a deep reflection about how the heck I was going to zero my z-height when I switch programs and use the ball mill. Anyway, I said screw it and hit the carve button with my hand hovering ever so close to the big red $$ saver. The machine did exactly what I was expecting and now I saw that I could use the feed rate override in Easel to bump it up to about 150%.

After the facing and adaptive were finished, I pondered about going back into Fusion and changing the Z-height in my setup to model box point. So I created new setups for the ball and final part cutout, and set my WCS to model box point.

Then I exported my gcode again, one file for the ball, then another for the final cutout pass and went back to the machine.

I set my z puck where the circle is below and zeroed out the z, then chose to use the last XY zero in Easel. Changing the WCS height to the model point worked as I was hoping and the part turned out really nice. You can see how smooth the areas are below that have already been cleaned up with the ball. 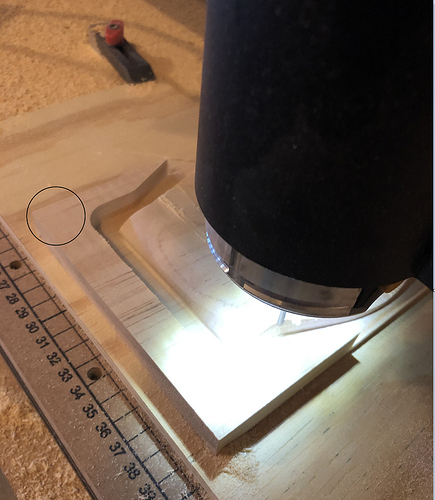 The next picture is of the part right off the machine, with no sanding at all. I decided the surface was smooth enough to not sand it, so I just wiped on some cutting board oil and called it a day. 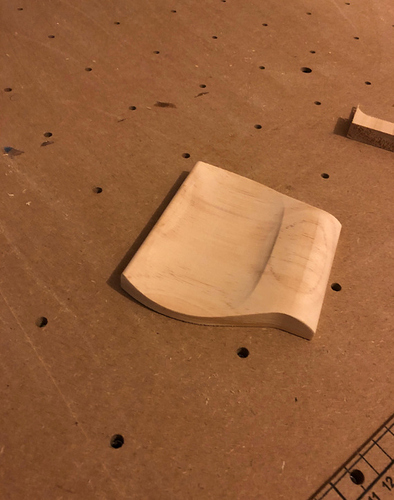 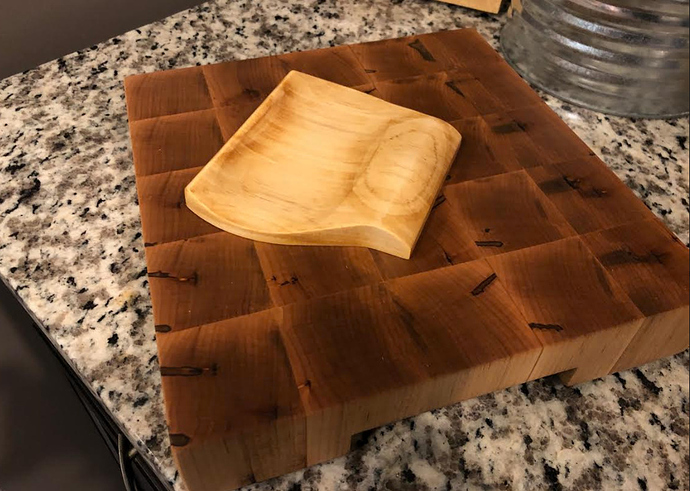 This was super long winded, but I hope that it helps somebody get started with using the CAM in Fusion 360. I’ve had the xcarve for well over a year and have been way too intimidated by all of the options in Fusion to give it a shot. One great resource that helped me a lot with this was the NYCNC youtube channel.

Nice work. How long did it take you to do all the Fusion 360 work?

Thanks Ivan. From idea to finishing the CAM program, about 3 or 4 hours. That includes watching a few youtube videos for help along the way.

And another 6 for the awesome write-up?

Great post. I skimmed for now and bookmarked for when I start with Fusion 360.

Cool. Glad you found it helpful. Yeah the write-up took a little while, but it was pretty satisfying getting everything to work.

Thanks for this. I have used F360 quite a lot for 3d printing but am just starting the cam journey. Fortunately YouTube is a friend and articles like this certainly help. Would you mind sharing your F360 files please.

Yep no problem. Here is the file, but just a word of caution, I changed some of the height settings for a quicker run time and I haven’t ran the changes on the machine yet, so disclaimer. Let me know what you think and of course any questions.
spoon rest v4.f3d (822.7 KB)

Thanks for sharing, it definitely helps those of us learning with fusion360. It has loads of features but definitely isn’t easy to get toolpaths how you want straight up.

Job looks great by the way, my girlfriend would love that!

Hope it works out for you. I did some more testing on these and ended up changing the facing to .125" max step down at 60 ipm, changed the adaptive to .25 max step down at 60 ipm, and the parallel pass to 80 ipm. I ran this on the machine and was very happy with the result. It was so satisfying to see those big chips flying when cutting at full depth of the diameter of the bit. It also cut the run time down pretty significantly.

I love NYCCNC. I have dabbled in fusion but also am intimidated to use it fully for tool pathing. I need to though. Will be the best way to fully learn it. thanks for sharing.

What was the machining time, approximately? What do you think out would be if optimized?

Maybe about an hour or so after I used the more aggressive settings from a few posts up. Could probably cut 10-15 minutes if the surfacing pass was skipped or a larger tool was used to do that op. My largest cutter is 1/4".

Increasing the plunge rate would also help. I used 15 ipm. Not sure what the max plunge rate the xcarve could support.