Hi! I need some help with an issue…

I started carving a project (a box to do jumps) a few days ago, before the last firmware update and everything went smooth.

After the update, I was getting paralelograms instead of squares…I tried tweaking the steps/mm but it didn’t seem to work to solve this issue.

What’s weird is that I did’t do anything to the machine, except updating the firmware… anyone with this issue? or any ideas on the matter?

Thanks in advance, and sorry for my english.

Make sure one of your Y axis belts isn’t broken.
Could you share a picture?
Pictures help because someone may see the picture and had that happen to them.
Russell

Another thing to verify IF they are operational is that X and Y are square to each other from the start. It’s possible that the gantry got bumped and is a little askew and that re-aligning it might be enough to fix it. IMO that gantry bar and the end plates on the X-Carve are a bit thinner than they could be and this doesn’t help the gantry remain square, they are easily tweaked out of alignment and don’t do the best to try and self-square. I bet this is one of the reasons the X-Carve Pro includes 2 Y homing switches and a self-squaring homing cycle… . .

And Along the lines of Russell’s idea. I’d check belts for damage as he mentioned as well as the stepper itself to make sure both steppers are operational and that both stepper drivers are operational. You can unplug each of the Y steppers (while the cnc is off) and test the Y one at a time, IF with one stepper unplugged, neither side moves, than you may have a damaged driver chip.
IF the gantry is moved around (front and back) by hand one of the drivers tend to blow and then only one stepper motor will be remaining operational and the other side will be dragged around, causing the X&Y t not be square to each other. 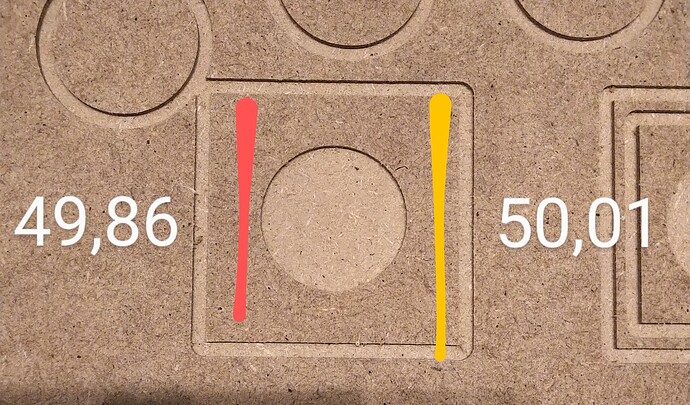 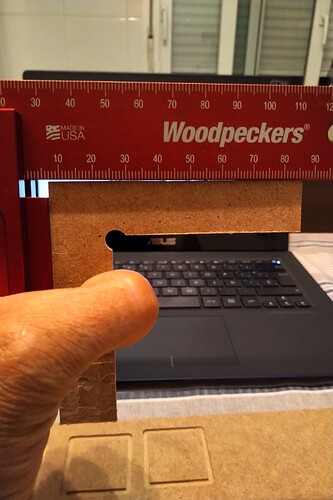 Thanks for your reply!

I will check all those things.

The first picture is a small square (50x50mm) and showing that the vertical measurements are diferent from one side to the other, plus I can kind of see that it’s left down/right up corners are +90 and the other two are -90. It might seem a small difference, but transferred to a 750x600mm square, it is big.

On the other picture, you can see the light between the carved square against the reference square. For comfort grabbing the square is turned 90 degrees, but that gap is coming from the left down corner.

As I said, what bothers me is that before the update it was cutting just fine.

After a few tests, I did this:

After all this steps, it seems to be cutting square again, but I noticed something though:

Any ideas on this?

Thanks for your help!!

If you’ve not done so yet, you may want to check the eccentric nuts and revisit calibration, using the largest movements possible for the most accurate results across the board…

I will try readjusting the eccentric nuts and read again the link you sent, just in case I’m missing something else.