I’m having problems since I moved to a new location with the calibration of my machine. It’s carving off square. I have adjusted the Y axis rails so that they are at 90 degrees to a dimensioned hardwood board that I clamped to the risers, to keep the Y axes parallel, as shown here: 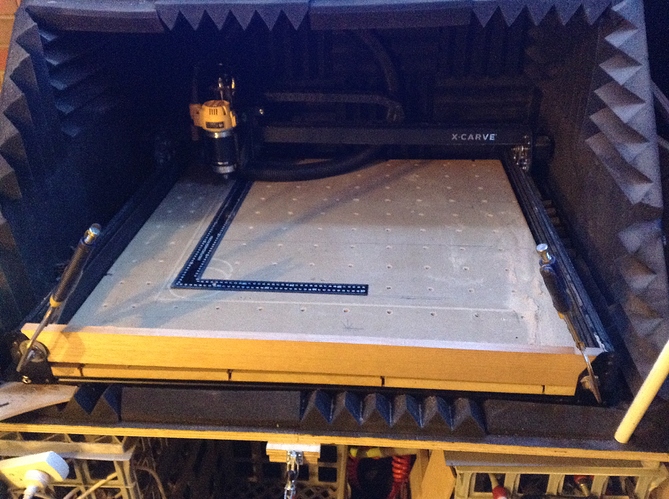 I have loosened off the front risers that connect the Y axes to the frame/wasteboard, and moved them around to see if that pulls it back into line, but I haven’t had any luck with it. In this picture, it shows the spindle 20 inches from the X/Y corner of the square. If I run 20" along the X axis, it runs along the edge of the square. When I run it 20" away on Y, you can see it’s about 1.6cm to the left of where it should be (if it was 90 degrees to X). 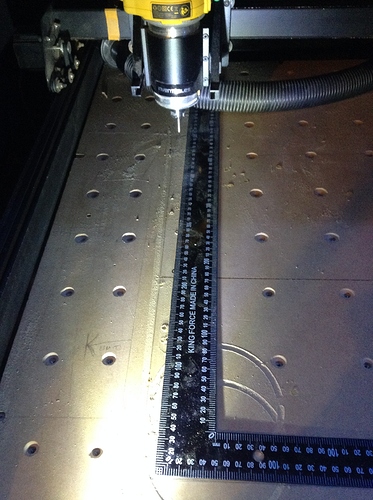 I’ve run out of ideas, does anyone know which adjustment I should be making instead?

Are all of the Y axis rails square to the X axis? checking the machine hasn’t gone trapezoidal

That’s a good question! I will put my square against the gantry and report back…

Before you power the unit square your X to the frame.
I just measure each end of the X extrusion to the Y plates. I usually have to push the right side back about 1/16" or more. Then after the power is applied it holds true until power is turned off.

What’s the fix for that?

Hi Mark, thanks for the suggestion. I measured from the Y plates at the front of the machine to the V wheels for the gantry, and there is a difference of about 1.4mm more on the right hand side (which explains everything!) My problem is, with the power, off, if I push one side into place, it just naturally gets pulled back to where it was. I’m not sure what to do from here.

Try turning it on while holding it true.

I can’t even hold it true. I don’t have enough hands to measure it while manipulating it, and the way it resists me when I push it makes me feel like it needs to be adjusted somewhere instead.

How long have you had the machine?
And how long has this condition existed?
Maybe report to Inventables. Possibly the X extrusion was not cut square on one or both ends.

I’ve had it for about a year, but only set it up recently, so I wouldn’t have known if it was out of whack. I’ve contacted Inventables, but they’re off for the weekend, so I thought I’d try the forum.

i’d loose up all the bolts holding the waste board and try and resquare the frame of the machine. Sounds like its all out of wack. with it loose move the x gantry all the way to the back and then to the front a few times. once its all square loose lock the bolts back up.

Hi, checking the frame was square was the first thing I did. This problem relates to the relationship between the X axis gantry and the Y rails (both of which are parallel to each other and square to the frame.)

So what we’re saying is the Y axis is square and parallel but the X is on an angle. Like this (shown over exaggerate) 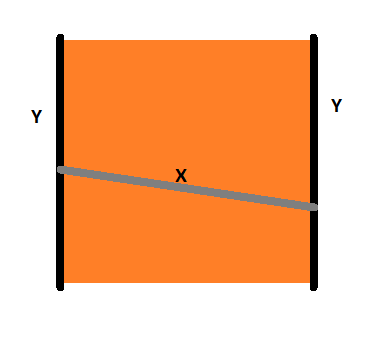 Things to check would be if the X axis plates are bent or V wheel spacers/washers missing.

Thanks for the suggestion Angus, but as I mentioned further up the thread, I can’t push the gantry against bump stops to get it square, as the resistance is such that it feels like the machine will be damaged by it. I’m hesitant to shim it, as that will significantly decrease rigidity. If the makerslide wasn’t cut square, I’d rather replace it with one that is square. At this point in time though, I still don’t know if that’s the case.

That sounds like something is MASSIVELY out. You should be able to with the machine turned off be able to move the X gantry around with no problems and pull it all the way forward to hit the front support plates of the Y axis.
Can you take some photos of the X axis plates? Something sounds like it is seriously messed up.

I like the look of your enclose by the way. Where about in the world are you? might be someone local to you who could come help you.