I’ve done a search but can’t find exactly what I’m needing to know. I have the Y axis squared, diagonals are within 1/32’. Now I’m needing to know how to square the X axis to the Y axis. I’ve found a couple posts that mention carving not being squared but it related to an electrical issue(current overload, or some type of binding). 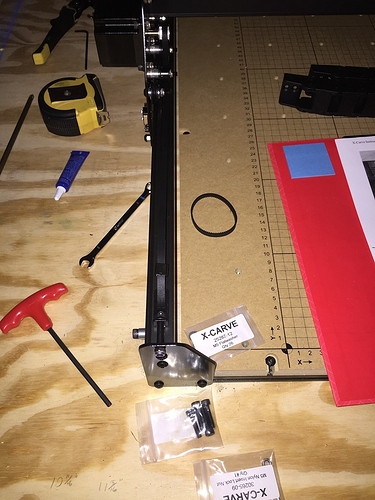 When measuring the distance from end plate on the Y axis to the plate on the end of the X axis, and comparing it to the same measurement on the right side the difference is approximately 1".

I’m trying to get everything as perfectly squared now as I can so there is less to mess with once I get the machine fully assembled. I had actually started to put the belts on last night and noticed that the X didn’t seem squared, but thought I had to be pretty dang close since the Y was. Wrong.

Any help would be greatly appreciated. Getting some batteries for the fish weigh scale today so I can measure belt tension, then will only have the side board to put together along with the control box. SOOOOOOO close!

Well, crap. Just stumbled upon a PDF from “designs by phil.com” titled “how to ensure a square x-carve”. Now I’m going to have to take the waste board off and check everything from the base frame up because my OCD won’t let me NOT do that. Maybe the frame isn’t exactly square and that could be the problem. If anyone has any other ideas I’ll check that too…and thank you again.