Stiffening Mod: Did I bend this maker slide?

I modified some new, unused makerslide to do the stiffening modification on the gantry and I noticed after bolting the parts together that one of the 500mm long pieces was warped. My question is, did I somehow do this while drilling the holes? The parts were new, unused and never dropped (no dings or scratches anywhere)

I don’t think I’m eligible to have the part replaced because it had been modified…I’m just mystified at how this could happen. I used the same procedures to drill the holes in each makerslide and the other one was fine. If it is my fault, can anyone give me tips on avoiding this issue? 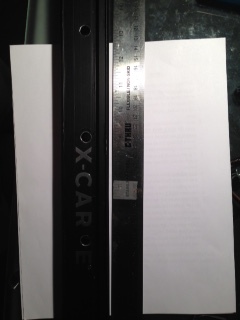 are you using spacers between the two pieces of makerslide? if not that is likely your issue. there is a gap no good way to fix that unless you re-engineer the side plates and have those cut out again as well.

actually if you did that you throw off the extruded Z carriage so dont do that LOL. spacers do that

I’m assembling it in the typical way that’s been instructed elsewhere on this forum with a 3/16 spacer sandwiched in between the two pieces of makerslide and all the parts bolted together. I noticed the bend when I first test fit all the pieces together.

I’m sort of kicking myself for not checking the part for straightness before I started! LOL

hmmm. well i have seen someone received a makerslide portion bent once before due to shipping issues. so with out checking prior to the mod there isn’t a way to know if YOU did it or shipping did it. In either account i’d reach out to inventables support. worst they are goign to tell you is they can’t help you

best of luck either way !

Thanks for the support. I think I do have a case because I removed the two 500mm MakerSlide already mounted (so I could continue with the modification) and they were slightly bent the same way.

Update: Contacted Customer Service and they offered to replace the defective parts.