In Easel, I imported a design of straight lines and curves. After uploading my image with image trace, using the threshold and smoothing buttons, and importing, the design looks good, but when i carve the design, it moves the bit to cut a second pass through all my lines. I checked the design again, and when I hit the edit points button, i see there are points on the left, and the right side of my lines. There are hundreds of points to edit, so that’s not practical. My goal is to use a 1/16 bit, and get a 1/16 cut. But the result is an almost 1/8 slot. How can I fix this?

There are hundreds of points to edit, so that’s not practical

Sometimes it is, but you probably just need to start learning to use a full featured vector drawing program like Inkscape or Illustrator.
Can you share the original design? 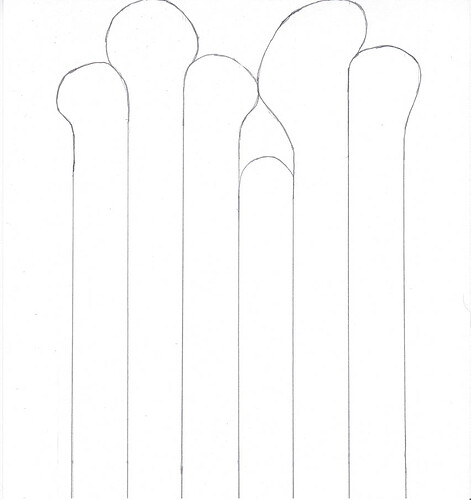 i just want to cut the lines. but when i look at the edit points, there are points on the left and right. I’ll try to screen capture it.

If you want to do this in Easel, check my post from a few years ago here:

Not an elegant solution, but a quick one for this case: [delete_nodes] Just double click to enable node editing, select a node on the path you want to remove, and smash the delete key until it’s gone. Typically, I’d do this sort of stuff outside of Easel (Inkscape) and import an SVG.

Thanks. I’ll try that.

I also downloaded and messed around with inkscape, but when I import the original jpeg, and save as an svg file, easel won’t import it, since it’s still an embedded jpeg in the svg file. Not sure how to overcome that.

Hello Michael and welcome to the forum,
When you save something as an SVG from InkScape it has to be a vector image not a jpeg. So when I save something I will copy what I want to save and make a new page and then save it as an SVG. Watch some YouTube videos on InkScape about combining shapes. I use CorelDraw which is similar to InkScape except its not free. I took your image into CorelDraw and redrew it. Once you get use to redrawing things it doesn’t take long.
Good Luck
Russell

Thanks Russell! That looks perfect! I’ll watch some you tube videos as you suggest, so I can do it myself next time. For now, this helped me tremendously! Thanks again! Mike

Not sure how to overcome that.

You’ll have to trace it in inkscape too, but you’ll have more tools available to fix it.
If it were me, I’d just redraw the shapes in Inkscape. Can I ask what it is? An instrument?

Edit: Or wait for @RussellCrawford to come along!

It is an instrument. Good guess! It’s called a tongue drum, or a slit drum. Think of a marimba, except the keys are still attached to the instrument, instead of individual keys. It’s played either with soft mallets, or with the palm of the hand striking 3 keys at once, which are tuned to a chord.

This is the top, which is built into a box, which acts as the sound board and amplifier.

Thanks for the help. I’ll have to learn more how to work in Inkscape.

You mention Tongue Drum and I remembered seeing one in the project section,

One of the most exciting and fun projects I've built to date! This turned out to be a great musical instrument and with some patience during the tuning process, I'm sure you can achieve just as beautiful sounding instrument as I did. Let's play!

I saw the one Russell listed too.
There’s some vector files on this page.

how to make almost anything

I saw her video on YouTube before I even bought my cnc router. Her project has inspired me, and after some research, I found an instrument made by the Hardwood Music Company. While not an exact copy, I did base my design on one of theirs. 12 keys, which are grouped into 4 three note chords.

Now that I have a cnc router and a plan, and have been using easel and the forums and the project sections, I did see her entry here. It’s a pretty cool project!

I hope to have my version completed by Christmas, as it’s a gift for a percussionist friend of mine who has helped me a great deal this year.

Awesome, I’m sure your friend will love it

Heading to the wood store after work today. Hoping to find some nice straight grained paduak for the playing surface, and some curly maple for the sound box. I’ll post some pics as I go through the process.

I have professionally produced tongue drum. It sounds just beautifully. Good for you making one from scratch. The tuning might be a bit tedious, but I am sure once you catch on from the first tongue, the rest should not be too bad. Show us a picture of the completed drum.