Awesome, glad its working out for you. From what I have heard Inventables always makes it right. Cant wait to see some of your work.
Russell

I had a small quantity of “missing” parts back when I assembled my X-Carve as well (i.e. two nuts out of 100 of same size). Considering Inventables is a small company, this was more than forgivable, and they shipped me new ones free of charge after I (calmly and patiently) explained the situation to them. Considering the current state of affairs in the US, a delay in response wouldn’t be unexpected, at least from my perspective.

Doing my best to maintain brevity… I recommend anyone else coming to this thread under similar circumstances as the OP maintain a level of understanding and patience, and give Inventables a chance to correct your issue. You may have spent a sizable chunk of change on your new tool/toy, but keep in mind you made the decision to spend the money, and these forums, along with the experiences of MANY X-Carve owners, were available for you to research ahead of time, so having to endure a small delay in assembly due to some missing parts is no grounds to burn down Inventables HQ.

Glad to hear you are for the most part up and running. I had faith that in the end inventables would come through. I have never seen them not. When I first got my machine I had broken limit switches and they sent me not only the replacements but extras that I had the very next day. I understand the frustration, especially with the kind of investment. I look forward to seeing what you do with the machine.

Quick update: been doing some carving, getting a taste for how the machine works. So far so good.

Past that I want to address the continued comments implying that I’m being unreasonable.

Again, let me make it clear that Inventables addressed all these issues to my satisfaction and I’ve come back here to update this thread to reflect that. In my emails with Inventables the worst I’ve been is terse. I never suggested that Inventables should be “burned down” over this. I never even asked for a refund.

My frustration with Invnetables was due to the lack of response from them. Yes, I contacted them about it over the weekend, when they are closed. But given the cost of the machine and that it was a show stopping issue not even past step-one; I did expect a response sooner. Notice I said “a response” I didn’t even need a solution, just a response. If that’s unreasonable, OK, you’ve got me there.

The last thing (hopefully), I noticed that the front panel LED was not coming on. The machine seemed to be working as expected however so I initially ignored it. I did do some searching here and the suggestion seemed to be “check for a loose cable,” which I decided to do this morning. Cables were OK so I checked to see if power was getting to the LED, it was. Next I checked the LED (in situ, which isn’t ideal but…) to make sure it was not bad, it tested OK. The LED is such that I could not tell which side was the anode and cathode so I decided just to take it out and test it independent of the board. De-soldered the LED and powered it was a bench power supply, it worked OK. Now I could clearly tell which lead was the anode/cathode so I connected the board (without the LED in place) to check voltages and polarity. Found the problem: The LED was installed backwards.

Anyway, fixed now and I’ve e-mailed Inventables to let them know about it.

Back to doing some test carvings.

Thank you for your info. It is truly sad to see that one machine has had so many issues right of the gate. I have had mine less than a year now and other than the limit switch issue during assembly I have had no issues beyond it. I also have not seen or heard of anyone else having so many at once. You probably handled the entire situation better than I would have, lol.

To coin an old phrase “It must have been made on a Monday or a Friday” Not to make light of your plight here but rather to shed a little humor on it.

But be assured that inventables has always come through for the people here so you do have a great support structure in place.

OK, first carve. I think it went well, learned some lessons along the way. It’s not perfect, but not bad. I took my time during assembly to make sure the frame and everything else was square, but the machine is still sitting on my shop floor (which is most definitely not level). I need to build a proper stand. 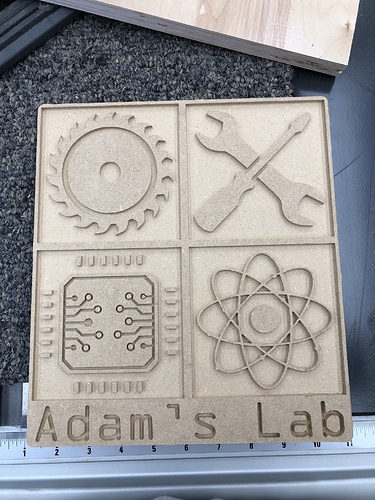 Seee…
It’s all worth it isnt it?
Nice work.
And just think, you have many more coming.

I took apart some pallets and made a super sturdy table for my CNC for almost pennies. Go to a lumber yard and ask if you can have some, they will usually just give them away.

I have found a few problems also. I was wondering why the sideboard has to use those little L braces? Why not use a 3" longer extrusion piece? Also after watching a few of the pictures and after having to remove pieces that shouldn’t have been added until later it does make it so much harder. Also if you lose or are short just 1 mm bolt or nut you have to find some some where. If you live in a small town like I do that means road trip for $1.20 for 3 5mm lock nuts.