I’ve been doing a fair amount of cutting of Aluminium on the Carvey recently, and I’ve noticed that sheet aluminium is difficulty to hold down sufficiently well to get a good cut. You’re using an up-cut bit, because Aluminium, which exacerbates the issue… In most cases, solving this comes down to

However, making life more difficult is that on one part of the wasteboard, (the vertical edge between the back of the wasteboard and the smart clamp), there are no clamp holes. I get that there’s not much space there, but I think it’d be possible to put one or two holes there for clamps, even if the clamps themselves had to be angled to prevent them hitting the side of the case.

See here for an illustration of the problem. Fortunately I was present (in hour 5 of a 5-hour carve) and could e-stop the machine as it started to try and cut 0.8mm of aluminium in a single pass. Taping down the metal was the best I could do at the time, and it worked reasonably well, but tape isn’t reliable either.

So, any chance of more holes in the wasteboard in future ?

The original design docs for the Carvey waste board are available and can be opened in Fusion 360 so you can modify to suit what you are doing.

Link to Carvey files on Grabcad. 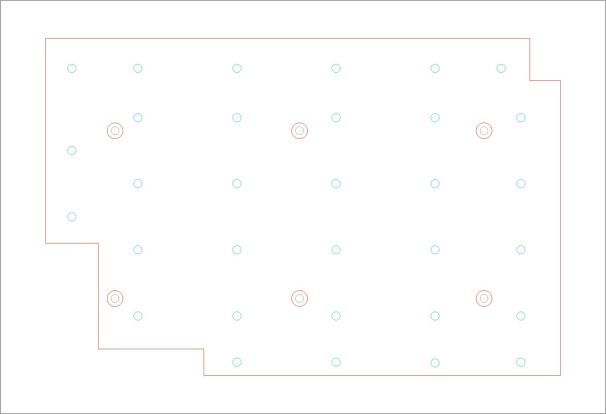 I wanted some extra tie down points on a metric grid, if I need another one, I will change the hole pattern but it sort of works for me. I don’t really know how to drive Fusion so I re-drew this in Visio.

There are 2 problems I found with rolling your own waste board:

1: The aluminium base plate has through holes that correspond to the tie points on the original so you have to be careful with the length of the screws used.
2: Because the waste board is larger than the work area of the Carvey you can’t make a complete one on the Carvey.

That’s really useful, thanks Gary. I’ll have to think about how best to use that.

I can share this with the wasteboard team but you are also free to make your own wasteboard if you wish. You can unscrew the one in there and put on a custom one. The guys at IDEO across the street made one out of HDPE I think.

You have a wasteboard team? That’s awesome!