After few adjustments to how the X-Carve is mounted to the table and the non sacrificial part of my spoil board, I felt it was accurate enough to run a surfacing job. The six sacrificial boards shown sit on top of two separate MDF pieces to which the T-Track/sail track is screwed.

Despite the various test I’ve run showing that the spindle (Makita) was vertical and square, it was cutting a sawtooth pattern (very small) on each horizontal pass. I fixed this through trial and error - adjust , make a cut, adjust…
It’s still possible to feel the separate passes made during the surfacing, nothing I can do seems to fix this. I’ve run separate passes parallel to both the X and Y axis and it’s the same in both cases. While there’s no ridge or lip to mark the edge of the pass, you can feel the router bit track when running your fingers over the boards.
The first two boards (from the left) are perfect, no detectable marks. The next two boards get progressively worse with the final two being more difficult to detect the router passes. Last board (right) is near perfect.

Any suggestions as to what I can check that might be causing this? One or more of the bracing/stiffening mods will happen (eventually). I might be concerned over nothing but if I can improve it, I will. 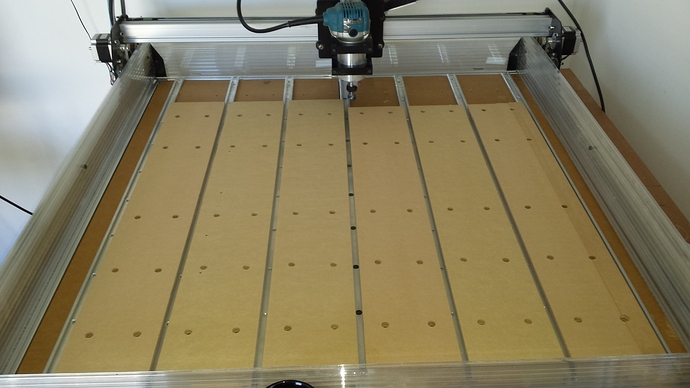 you are getting flex in you x axis gantry…that is why it is worse in the middle an better near the sides. you get more vibration and flex the further from the y axis slides. do one of the x axis stiffening mods and it will help. it will never be 100% perfect.

I suspected as much. looks like the X axis mod project has been brought forward a bit. Right after the dust shoe project which I’ll do right after the clamp making project…

I have to do mine as well…I was going to do the one with the 5mm bolts from top to bottom between the rails but I bought too big of washers.