In some of the photographs I have posted and in the videos I have put out, people have noticed my Y axis end plates and asked about them. Now I have received requests from some users to make them. So I have decided to give it a shot and add them to my website www.triquetra-cnc.com where I have been selling the Triquetra Touch Plates.

There are currently two 1000mm X-Carves that have the higher Y axis end plates that I have made. One is mine and the other is a good friend in Florida. Both machines are working perfectly with them. There is no flexing introduced with even the toughest carving sessions. I personally have carved well over 100 Triquetra Touch Plates with these installed and never once had any issues with them.

They are made from ¼ inch thick 6061 aluminum and are 2 ½” wide by 5 ½” tall. I installed them using the existing mounting screws for the original end plates. They only take a few minutes to install and if you follow my installation guide it will not mess up your machine alignment in the process.

I am currently making these in limited quantities for now. If you are interested please go to my website at:

Free shipping via USPS Priority 2-3 day mail is included for USA destinations only. International customers can order them as an add on when purchasing a Triquetra Touch Plate. I am producing these in limited quantities for now. If you find that they are out of stock, the website will allow you to backorder them. If I get too much of a backlog and am not able to fill them quickly then I will disable the backorder ability until I get caught up.

I ordered a set from Charley yesterday morning, when he first discussed it on the forum. I received a tracking number by yesterday evening. Everything I get from Charley is first rate and his customer service is outstanding. Put it this way, if I need something and Charley makes it, I’m getting it from Charley.

Charley, I think another good product idea would be some support braces to stiffen the Y rails in both regular height and extended , package it all up with the touch plate and have like “upgrade package 1” I would be on that in a heartbeat !

At that price, how are you making money! That’s amazing! Good job!

If you look strictly at the cost of material I am making money. However today, while I was making a set, I broke a belt on my Y axis and ran the bit right across the middle of one of the end plates. So that one was a loss. Then I had to order all new belts for my 1000mm X-Carve, another loss. Down for the rest of the day today, another loss, Down for the best part of tomorrow while waiting for the Next Day Air Shipment from Inventables to arrive with new belts, that’s a double whammy of a loss there. Won’t resume shipping the end plates until Thursday, yep, another loss.

So why do it? Because I love to make stuff and if I can make a little bit of money doing it then why not. Then of course there is the fact that what I am making are smiles from the people who use the stuff I make and that makes up for all those other losses. Do what you like and like what you do. If you can’t live by that rule then your in the wrong business. So, the profits I do make allow me to keep doing what I like. I’m not getting rich here, never planned to and don’t expect to either. But my profits did pay my Vet Bill today for my poor little pooch that had to spend the night in the Animal Hospital. (Thank all you guys for that!)

Love your work Charley, your heart is in the right place

I have a friend of mine that comes to the shop and hangs out during the day while I am “trying” to get things done while he continues to talk. I’m sure that some of you know what I am saying there. But he is a dear friend and I wouldn’t have him any other way.

Anyhow, he has kept bugging me about getting the Y axis end plates out and also my own version of hold down clamps and then creating a bundle with a discount on the entire package. That is another reason I decided to put end plates out there to test the waters. If they continue to sell like they have already then I will create a bundle like he suggests.

I do like the idea of support brackets for the Y axis but to be honest, I cut a piece of 3/4 inch MDF that is as tall as I could make it and not interfere with the movement of the machine. I screwed them to the inside of the Y Axis rails to serve 2 purposes. #1 was to keep debris out of the Y Axis motors and belting, and #2 was to stiffen the Y axis rails both vertically and horizontally. It does all this very well so I don’t see a need for any other bracing. With the aggressive carving I do daily, I have not had any flex issues with the Y Axis rails.

I wouldn’t worry about discounting the package, also the braces are for function and vanity I think matching end plates, braces and a touch plate is like chrome on a big rig !!

Order placed. Take your time, I’m in no rush.

Time to order some socket head screws when I change them out…hate those button screws.

Time to order some socket head screws when I change them out…hate those button screws.

Justin, you are number one on the back order list now. I should have yours finished tonight and in the mail tomorrow.

What the Heck Charley,

Do you still have my shipping and payment details?

I do not ever see much less keep any of my customer credit card information. 100% of the payment transactions are done on PayPal and that information NEVER gets entered on my website. I do have your shipping details though.

What a day it has been, Folks are ordering stuff as fast as I can get it made. That is largely due to the fact that I broke belt on one of my Y axis yesterday. Inventables was kind enough to get me a replacement next day air. Those guys rock!!! By the time I got the new belt and had it put on, I already had back orders to catch up with. When I got home with a box of stuff and updated my online inventory, The Y axis end plates were back to zero at least!!

For screws to connect with, will the stock screws still work?

The Inventables plate is 2.66mm thick and they are put on using 8mm screws, doing the quick subtraction that leaves 5.34 mm for thread engagement.

The new plate is 1/4" thick or 6.35mm and using the 8mm screw, would leave only 1.65mm for thread engagement. That doesn’t seem like it would be enough.

The other holes into the MakerSlide probably aren’t as big of a deal as the old ones were 10 mm (new ones are 12mm) and even though you lose 3.69mm of thread engagement, you still have plenty of engagement left.

I believe you may be correct there. I don’t remember which screws I used but I will check on that today and measure the length of them. I thought I used the original screws but I have an assortment of screws I keep on hand for various projects. I know most of the screws that Inventables use are commonly available at most hardware stores. If they are really needed I will procure some and include them with future orders. If you need some let me know and I will mail some to you.

Thanks for calling me out on that.

I’m checking my local source to see if they have those in stock. If they do I will include them with your package going out today as well as all future orders. Anyone who has already ordered can request them and I will send them some as well.

Not calling you out by any means…just preparing myself more than anything. You may need to provide a cautionary note that new screws may be needed.

The Inventables stock screws are button heads and I want to ditch them anyways so I bought some stainless socket heads with nylon patch for thread locker from McMaster-Carr. 10mm for the tee-nuts, 16mm for maker slides (and some 12mm for replacing my X axis screws as well).

I will try the stock screws once I receive the plates and will let you know. I don’t believe that they will work due to the thickness of the 20/20 extrusion before reaching the tee-nut (the red square area below). 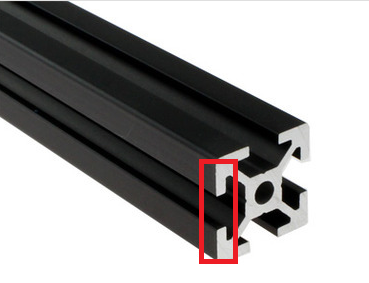 I’ve got next week off and on Monday (given they’ve arrived) plan to install these plates while also squaring up my spindle.

I’m checking my local source to see if they have those in stock. If they do I will include them with your package going out today as well as all future orders. Anyone who has already ordered can request them and I will send them some as well.

I can get M5x10 socket head screws and m5x16 Philips head screws today. I will send those along with your orders.

Not calling you out by any means…

No need to be concerned about that, I encourage people to tell me if I miss something. That is how I am able to improve what I am offering. I love all the good comments I receive and appreciate the not so good ones. Constructive criticism is the fuel that powers improvement!! Anyone who turns a blind eye to it is doomed to failure or at the very least subject to making the same mistakes over and over. I don’t want to be that guy.

I’ve learned so much from my mistakes, I’m tempted make some more.

I’ve learned so much from my mistakes, I’m tempted make some more.

Thank you for that, I needed a chuckle this morning!!

Spreading joy throughout the universe is a tough job. Someone has to do it. Who better equipped than me for such a difficult task. If I brought a smile to your face, then my job here is complete.

I’ll verify if the stock screws will work once I receive the plates.

I appreciate your prompt attention and resolution for this. Another fine example of your amazing customer service.