I downloaded this from a google search just to test out a longer carve. This is my first 1 hour carve. I’m really surprised how well it did for only being 5x5. I’m thinking with the final carve, I will go with a 60 degree bit rather than 90. 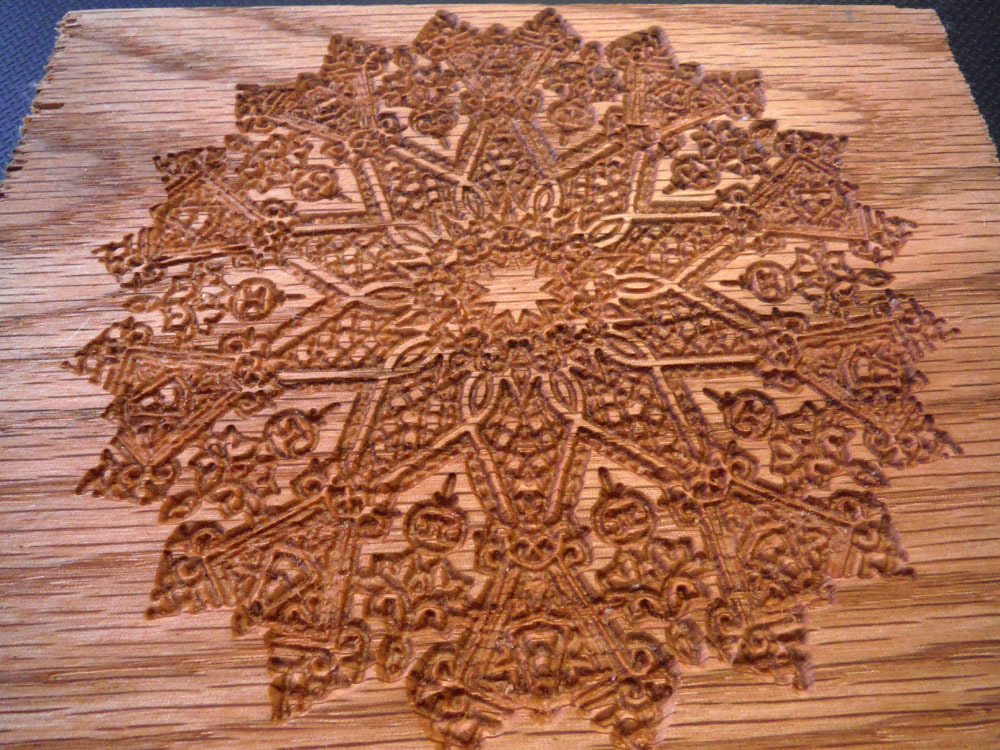 That looks good as is, I’m excited to see what it looks like with the 60 degree bit! If you don’t mind, can you post the feeds and speeds you used for both bits when you are done?

Thanks Robert! I’m pretty curious how the 60 degree bit will do as well.

I did it in F-Engrave, so the options are a bit light. It does all the depth calculations based on line width and v bit diameter, but the feed rate was 50 inches per minute, and speed on the Bosch Colt was kept between 1.5 and 2.5. Didn’t notice much difference in cut quality between the two.

I didn’t do any cleanup passes on it. I’m thinking of trying it on the next test. Does that usually make much difference on carves like this?

Cleanup passes make a world of difference with regular bits, but I’ve never done anything large with a V-bit, and I’ve never used anything besides Easel.

I’ll have to try the cleanup pass next time. I was going to try it on this one, but something went wrong when I was moving the bit back to home and I had to pull the plug, so I just skipped it,

Fusion 360 is awesome! And free! And you can get free step files for 3D carving from grabcad or 3d content central.

Fusion 360 is awesome, and it looks like the engraving tool can be used to do V-Carving. From the tutorials I have seen by Autodesk, it’s mostly geared towards less complex objects since it requires you to manually select each part of the engraving one by one. That could take hours on something like this. If there is a way to do it all at once, let me know. I’ve been trying for the last few hours to get it right.

With F-Engrave (also free), you just load the image/dxv, tell it where to start, how fast to go, and what size your bit is, and you’re ready to generate g-code.

I would be interested in seeing what a 60 would do on that and even a 30 deg bit.

The detail should become really crisp with either of those bits.

Looks great, but a little busy looking. I would try profile tool-path instead of Vcarving. 1 or 2 mm deep and still use 90degree V bit. Result will be lot more clear.

Looks great, but a little busy looking. I would try profile tool-path instead of Vcarving. 1 or 2 mm deep and still use 90degree V bit. Result will be lot more clear.

It looks a lot better in person, but it does look a little bit busy. I’m hoping that a finer bit, cleanup pass, and some cleaner wood will help with that.

I’m not sure I understand what you mean with the profile cut. Could you describe it?

I use Vcarve pro. Have options for toolpath. The first option is profile cut, second pocket etc. mostly the time, I use profile cut option not Vcarve and use Vbit. If design is busy. This time bit does not dive, just draw lines depends on depth you give.

I tried the 60 degree bit today, and it did ok. I believe I actually got better results out of the 90 degree one. With some fiddling the 60 degree carve may look better, but 90 looks good to me. I’ll see if I can post a pic later.