I’m cutting with a v-carve bit in Oak. It does the filigree border fine but then when it goes to the text, the machine ended up engraving text on top of the text it had just carved. Any idea what would cause this? Pic attached. It should read “Est. April 20, 2019” (and that is how it looks in easel) but as you can see, the carve wrote the 20 right on top of April. I checked the belts and V wheels and they seem tight and fine. 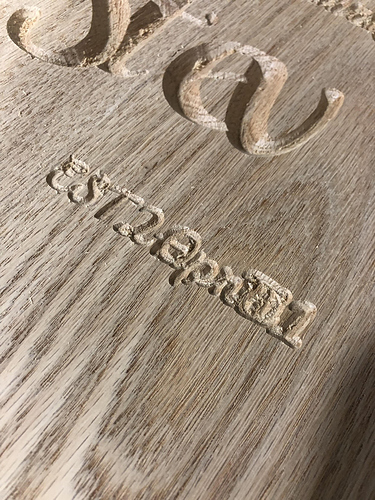 Either the machine did what it was told => its in the gcode, any preview should typically reveal that if thats the case
Or it thought it was somewhere else => steps lost.

Did you hear a brief grinding noise coming from the stepper during carving?
(Grinding noise may be attenuated/weak and not alwaus apparent.)
If yes => steps lost
If no => gcode

Did the bit retract to the exact same position after the carve? (back at work zero?)

Hey @HaldorLonningdal - the preview of the file looks fine.
If it is a ‘steps lost’ issue (seems likely) - what is the best way to determine and fix this issue?

Do you have the Xcontroller?

Steps lost can be from a multitude of things, but most common is friction large enough to overcome the motor torque.

I do have the Xcontroller. Would slowing down the feedrate help? Its 50inch/min with a 90 deg bit in oak.
Where can I find the settings you’re talking about? In the gcode? Sorry, noob at troubleshooting this type of problem, I appreciate the help!

50IPM in itself shouldnt be the issue.

I am a lilttle short on time right now, hopefully someone else may chime in.
Have you checked your set screws, making sure the motor shafts dont slip?