The best software workflow startup question - what path to get started in Xcarve?

Finally got the xcarve 1000 and now need to dial in on software workflow. I have done a lot of reading through the forum and online videos but need to zero in from your user experience for my particular needs. Any suggestions would be appreciated.

How I design and need to use xcarve

By better I mean I dont really want to buy new software if I can use what I have, but I also want simplicity so if it is simpler to use graphics I may consider buying additional software.

Thank you in advance.

i used adobe illustrator for all my design then save to SVG format.
wish it will work for Easel.

My xcarve isn’t fully assembled yet but what I intend to do is to get familiar with easel first and then move to inventor (is what I use for my 3d printer). The plugin for the toolpaths looks solid and the gcode is accepted bty easel using the fusion360 gcode definition

There is an Import SVG function for Easel. Doesn’t work for all SVGs especially with embedded fonts but it works for most.

Thank you, just getting into Easel, so some SVG importing does work and some do not for Easel?

I have photoshop and illustrator but I dont use illustrator. Photoshop now has an export as SVG as well. Is this method just as good as using illustrator to create the SVG? I would like to create the graphic logo and export into easle for a test run. I may use certain fonts as well.

Erwin, for 3d printing I use Inventor for the original design then convert using 3ds MAX, then zbrush then print.

So you plan to use inventor for xcarve? what plugin for the toolpath are you referring to?

If you want to use Inventor look into getting the HSM works addin, I think its free for most of the features.

Also if you are comfortable with Inventor you might be able to model in Inventor and the import to AutoDesk Fusion and generate you tool paths there. You can then export you code and import it into Easel.

But from the sounds of it, that might be more complicated than needed, if you aren’t needing v-carving, you can just export from Illustrator to svg and then import that artwork to Easel.

For fonts, you just need to convert to outlines in Illustrator and any font will work.

Thanks Rusty, I have seen a couple videos and was considering inventor/HSM workflow as well, when we get into actually creating 3d parts i will need to decide on a dedicated path to part creation for xcarve.

Right now I am separating part creation from logo creation to keep it simple as we need to get started with logos first. As you say I think the graphic SVG to easel route is a good start. So from what I see so far what Easel is looking for is a toolpath, so you could basically use an image as a logo as a background in illustrator and create paths around the logo and export the paths (not the image) as an SVG into Easel correct? I just created this simple cube and exported and it seems to open in Easel and work fine. 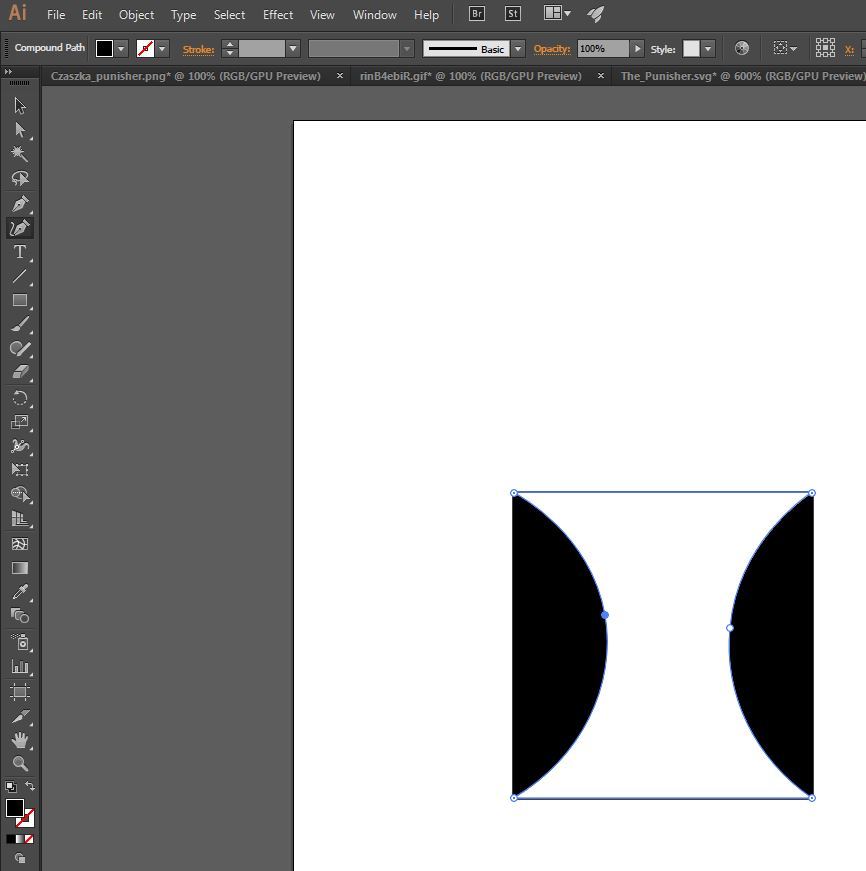 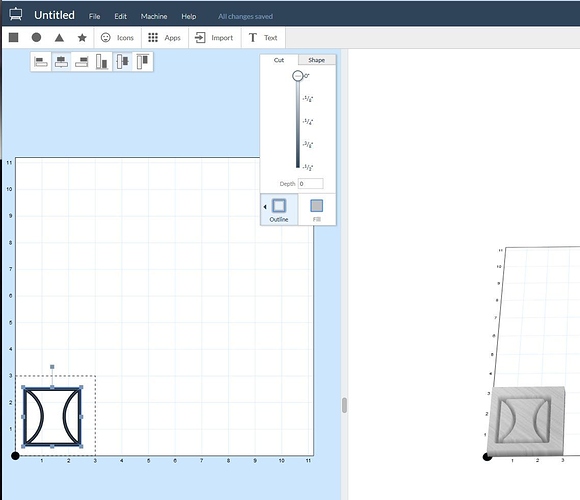 I will have to try it with more complicated designs but if it works like this it looks pretty simple. So next would be to have Easle create the gcode and use Universal Gcode Sender http://www.shapeoko.com/wiki/index.php/Universal-G-Code-Sender to send it to xcarve correct? I still have not gotten the machine finished but just trying to prepare. Is that all there is to it?

Looks like you have a good handle on it there from the svg to Easel part. But once all the paths are set in Easel, you can just send it to the X-Carve using Easel, there is a Carve button in the top right corner.

My wife and I have been running a small side business with our X-Carve for just about a year and Easel has handle everything we have needed. I’m starting to look at Fusion for some more complicated projects, but for our bread and butter work a Vector graphics program and Easel is all we use.

Thanks for bringing fusion up so what is the difference between choosing Fusion vs HSM for Inventor workflow?

One other thing, so no need to get the Universal gcode sender just use the carve button with easel? (not to be daft just dont have the machine up to try it right now

I don’t think there is a big difference between Inventor HSM and Fusion, just Fusion is free to startups and Hobbyist and you have to at least purchase Inventor.

Fusion is a bit different in regards to modeling, I’m having to learn it right now and it’s frustrating at times. I’ve used Inventor for the past 10 years so I might be a bit jaded in that respect.

As for Easel, you shouldn’t need to get UGS even if you start using Fusion or Inventor, they have included a g-code import tool now, so unless you need an offline option Easel should be all you need. I believe the g-code importer is still in early access mode, but you can request access on the forum here, just search for Easel g-code import.

I export my Solidworks files to STL’s which you can easily do with Inventor. I then use Meshcam to generate the g-code which is ridiculously easy to use and allows for 3D milling. I then use UGS to run the g-code. Works great!

Thank you, yes I can export stl then it looks like MEshcam is about $250.00 are you just using the basic meshcam?

I just have the basic Meshcam, however, I also have the cutviewer which has saved me a lot of scrap jobs.

You may also check out F-Engrave (free). I’ve had a great deal of success importing vectors and images with that one.

I use it mostly for V-Bit, but it can generate g-code for engraving with a couple of different bits. Should do well for your purpose.

I then throw the resulting g-code into UGS for final cut. I’ve also tested it importing into Easel, and that seems to work well too.

Brad, So you like F Engrave better than Easel? Can I ask what makes the difference?

For engraving and V-Bit carving, yes. That’s what it’s designed for. Easel isn’t designed to do V-Bit stuff, and can’t raise and lower the bit to make nice clean corners on letters and engravings. V-Carve, Artcam, and others are probably much better still, but they can be expensive.

On the other hand, F-Engrave doesn’t do pockets and things like that. In those cases Easel, or other software, is the only way to go.

I have been watching a few F Engrave videos and am impressed Here is a link to the file project I am working on in Easel http://easel.inventables.com/projects/mm1oBmvCNlJGPw5JZA78mQ

Do you think it would be simpler in F-engrave? I have seen some use inkscape and then import to F-engrave but I am looking at this video https://www.youtube.com/watch?v=aOxyWnLLt_8#t=1189.5341004716981 and looks like he imports a jpeg straight in. Which have you found to be better?

I am getting a better result in F-Engrave than Easel. I want to use 0.0625 flat bit but as in the second example I cannot get the result I want, so I am cheating by using the ball end mill settings with a 0.0625 bit. This is the result I get with the ball end 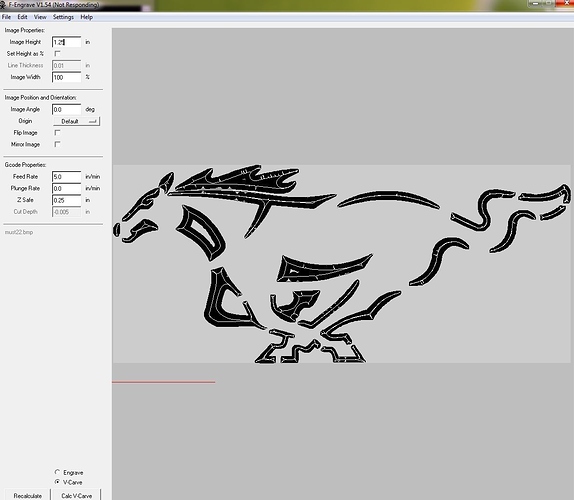 This is the result I get when I choose flat 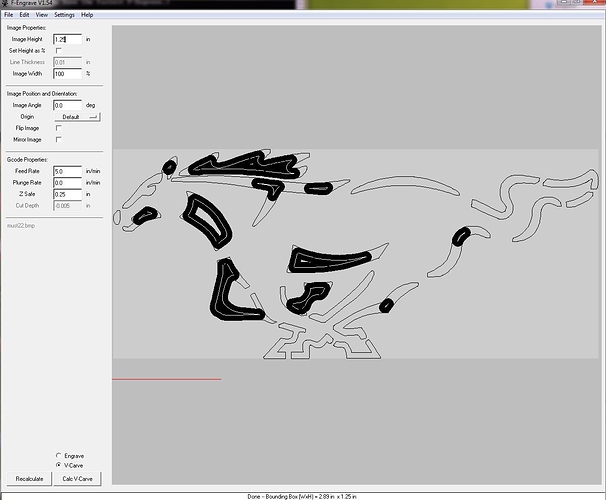 Will I be able to cheat using this method and get the flat bit to cut through the metal like the first example?