Thinking Outside the (Mitre) Box: Fun with Chainsaws

A while back I posted a question about cutting oversized pieces:

so I feel a bit like the dog that caught the car. I managed to get through a whole workflow and cut a complex shape into a work piece. The work piece is a piece of firewood which is 9" by 6.5" x 30"+ [image] OK, so now I want to snip that off the end, maybe in a way that allows it to stand up with the face angled forward, like a bookend or something. Sounds easy... right? So I get out the electric hand saw, blade is not really long enough... gonna be a really shaky cut, not really liking…

This is the item I wanted to cut: 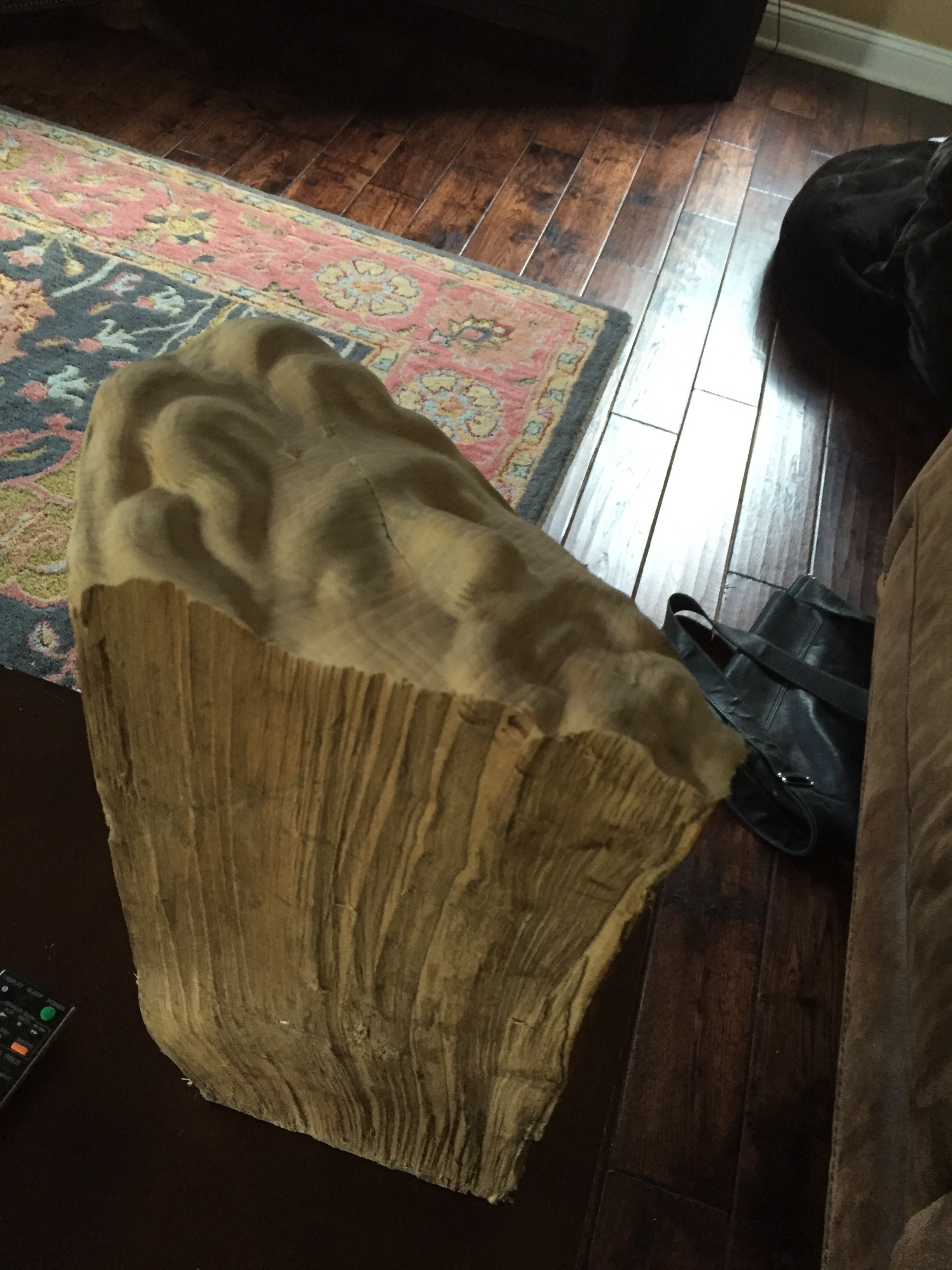 It’s been a couple of months and I had some travel and all, so I just got around to completing that task, so I wanted to post an update and let you know how it went.

To recap, the sensible among us here suggested I use a japanese pull saw and cut the piece by hand.
Because I have an abiding faith in power tools, I was certain there needed to be a better way.
Also, I wanted a way of making a controlled cut in a scalable fashion as my workpieces get larger.

It seemed to me that I needed some sort of mitring capability, but was not sure how to accomplish that.

After much googling I had a list of 3 options:

Just because I know you guys will be amused by it, here are the chainsaw-based options I have found, in rising order of expensiveness: * http://www.amazon.com/Beam-Machine-Chainsaw-Attachment-13in-L/dp/B000HD4LUK * http://www.amazon.com/Big-Foot-BFHC75-Headcutter-Attachment/dp/B0009H58SS/ref=sr_1_62?ie=UTF8&qid=1463869262&sr=8-62&keywords=chainsaw+cutting+guide * https://www.timbertools.com/Lignatool-Timber-Cutting-Guide-for-Chainsaw.html my instinct, since I have very little money for this, …

All of them somehow involved chainsaws.

In the end I bought a ‘Beam Machine’, which is nominally an attachment for a chainsaw which allows for controlled linear cuts. It is normally used to enable cutting beams out of felled trees.
The important part here is that you guide the cut by settling the attachment on a 2x4.
This means that you are effectively guiding the cut, and by aligning the cut you can get the effect of a mitre box, without an actual mitre box.

Here is a photo collection of using this to make a controlled cut of a carving from the end of a piece fo firewood (click though…):

Now that I have done it, some notes:

So that is my update. Awesome fun. Hope you find it useful.

Perfect timing! We had a very large Ash tree fall here in a recent storm and I was contemplating cutting the tree into planks for projects, but wasn’t aware of anything other than the mill-style machines for preparing the wood. Thanks!

I’m also into woodturning where split logs are commonly turned into round bowl blanks. I would have just cut off the carved piece on my band saw using the miter gauge as a guide, but that’s because I have a band saw and it’s been equipped with a riser block so it can cut material 12" thick and has the proper blade to cut green wood.

in my case I did not have a bandsaw, and to acquire one of the required size would have cost me a fair amount of money.

The solution I ended up with cost me:
$40 for the attachment
~$100 for the chainsaw
~$20 for the extension cord

so for me that seemed pretty ideal…

I would of built a custom v jig with bracing bolts to use it on the bandsaw.