Hello.
I tried carving a 2 tile sign. I noticed when I carved the second tile the depth and the alignment were slightly off. The second tile depth was about 1/16" deeper than the first. In the file it’s all the same. The edge was off by about 1/32" I can see the edges being off due to alignment on my part. What would cause the depth on the second tile to carve deeper though? I resurfaced the waste board prior.

I carved the file twice. The first carve was worse than the second. I would say the cut depth on the first was twice as deep as the second carve.

Since you say you’d surfaced the wasteboard that shouldn’t be the issue so most likely the workpiece itself isn’t of uniform thickness.

The rest is alignment, it’s best to use a side fence and use the cnc itself to cut the face of that fence perfectly parallel to the y axis movement instead of trying to manually align it…

Thanks seth.
The material is .5" MD. Both carves were from the same 4x8 sheet and both carves did the same scenario. When I resurfaced the wasteboard i went down about 3/16" so there is somewhat of a fence.

The alignment was off very slight. There could have been some saw dust I didn’t catch.
I’m wondering if my side rails may be off from front to back.

I’m wondering if my side rails may be off from front to back.

If this was the case, the surfacing would remove any eror caused by this issue, at least in the case of depth, and using the lip creates would also remove any side to side skew issue.

Is there a lil at the back of the wasteboard left after surfacing? That would angle the board up in the back during that first tile carve and could give that depth issue

There is not. The first time I resurfaced the waste board the was a lip on all four sides since I created the pattern slightly smaller than the actual cutting area. I since resurfaced it again to eliminate the lips on front and back. This was done prior to this particular project.

I’ll double check the thickness of the MDF for inconsistency as this is the only thing that makes sense at this point. Especially since the the first carve was more noticeable than the second. I have a couple of other projects that will require tiling, so I will try them and see. One is made from Oak plywood and the other from solid hardwood.

Thanks for the input. I appreciate it.

May I ask how you surfaced the X Carve wasteboard to the front and rear edges?

Likely he has a Post Nov-2021 version which uses the modular wasteboard, designed such that it can be surfaced without creating the lip on the front/back (there will still be a side lip unless one uses a very large surfacing bit) 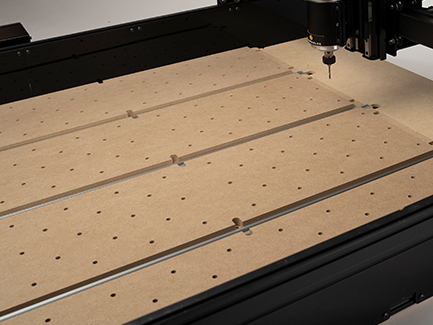 there is only a lip on the left and right of the waste board.