We were just watching your tiling video as we have a rather large project that needs 6 parts tiled and figured we would try it out (we generally just did it by sight).

You screen shows a tiling box next to the material box. We are not getting the tiling box.

The UI has changed since that video was made. To tile now, enter a length that is longer than the size of your work area: 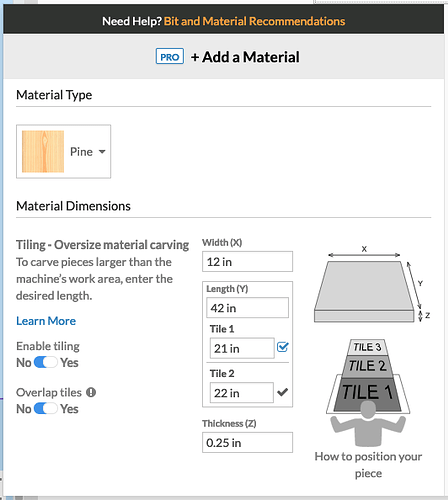 You also need to be opted in to beta testing:

Understood, I saw it n the materials menu after I had sent this yesterday.

I assumed from the video with Zach and crew that it was already released.

That being said how stable is it?

How do we tell the difference between beta features and features that are stable and have been released?

Anyone know if there is a reason I can’t turn off overlap tiling?

All I get is a circle with a line trough it when I try and turn it off.

The tiling functionality is pretty stable. Features that we release into public beta have undergone a series of automated tests, as well as manual tests by our development team and other Inventables staff. We’ve conducted several in-person usability studies with the tiling functionality as well and have incorporated learnings from those into improvements of the UI and user experience. Features in public beta might not have full functionality as we continue to seek feedback from users who are opted into the beta program on how to improve the features before wider release.

We currently have about 200 daily beta users of the tiling functionality and most users are having success with it. If you do use the feature, please note that you do need to take care in the manual alignment of the material when moving it between carves in the Y direction.

We don’t currently have a system to show which features are in beta and which are fully released, but we do have some improvements we are making to how we communicate about new features and this is something we will take into consideration.

Are you using a v-bit? Overlap cannot be disabled with a v-bit. You should see a popover explaining this if you click on the “!” as shown below:

Yes I read that but I guess it isn’t clear to me I couldn’t turn it off.

Too bad as you can see from the screenshot attached if I could turn it off it would save carving a small piece of the ampersand that has already been cut.

I added a square at zero depth over it so I didn’t have to re-carve it, but would be much handier just to be able to turn off the overlap. 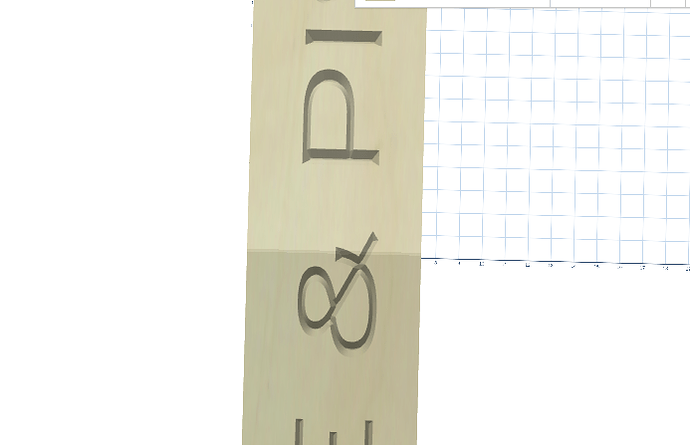 Hey @DebbieLee looks like @JeffTalbot is pointing you in the right direction. If you are still having issues let me know! Right now the overlap requirements with the V-carve is something that has to be included with how the tool paths generate.

Hey @Brandon_Cullum and @JeffTalbot , thanks for your input on this. Although we have done tiling a bunch of times in the past , it is the first time using the tiling feature,

Overall it worked well and did make it easier to tile, couple of small issues but nothing earth shattering.

Hey @Brandon_Cullum and @JeffTalbot , thanks for the input on the tiling beta. Worked out well! 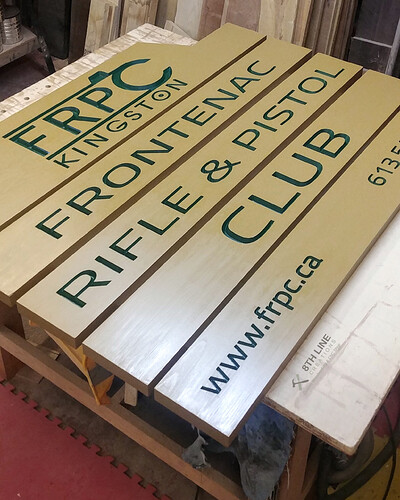