Tips on Limit Switches to Gshield

Does anyone have a solid solution to getting the three black limit switch wires that are supposed to be soldered together into the GND block that is also housing the black zip wire and the black wire from the fan? There does not seem to be enough space there to get all those wires into the block. Also any other tips when wiring up the g shield to simplify things. The header crimp pins have been a nightmare and I was wondering if there was a better solution for making sure those are connecting well to the g shield. Gracias.

Many people just solder a wire onto the junction of the three wires and then put that single wire into the connector.

oh that makes a ton of sense! I will do that tonight for sure. Thanks @LarryM

I can use the extra limit switch wire I have right?

No. The limit switch wire is a smaller diameter (22 gauge) and should not be used for the power ground. You should use an 18 gauge wire for this step.

If you have some of the stepper motor wire left, use a small piece (a few inches) of the black wire from that for this purpose.

You can then solder all of the black wires to that pigtail to get the connections you need. Then put the other end of the pigtail into the gShield connector.

[Edit] - If you want to just add the switch returns to what you already have in the gShield connector then you could use a short piece of the switch wire as a pigtail. If you are going to wire all of the ground wires together and then just put the pigtail in the connector, use the 18 gauge wire.

perfect. Thanks for the heads up I would have used the slack limit switch wire. I have some spare 18g wire and will pigtail it.

Another point to consider. If you are using the black and white wires supplied with the Inventables Limit Switch option, then you are most likely going to have false triggers due to electrical noise.

You can correct that problem if it happens to you by placing a 0.47uF ceramic capacitor from the limit switch input wire to ground for each of the limit switch wires. Locate the capacitor as close to the gShield connector as is practical for best results.

@LarryM Are you talking about false triggers when trying to complete the homing sequence? I was trying to run my homing sequence last night and the limit switch for the Z axis wasn’t responding. Meaning it wasn’t shutting off when it reached the Z axis max height. Is that failure caused by electrical noise like you mentioned?

The homing sequence is where most people get introduced to the electric noise issue. Usually the noise will show up by a pre-mature trigger of a homing switch.

One thing to check, is to make sure that you have the Z homing switch wired to the correct location for the version of grbl that you are running. They moved the Z axis switch location when they changed from version 0.8? to version 0.9?

If you need help finding the problem with your machine read these two threads:

Direct access to grbl. You can interact with grbl directly to isolate problems at the low level. To do so, you need to use a terminal type program to issue commands and get responses from the serial port that has the Arduino attached. Some of the programs are HyperTerminal, Putty, UGS (limited access), and the Serial Monitor in the Arduino IDE, among others. Make sure that you have the correct settings for the program that you use. The COM port where the Arduino is attached should have…

Thanks @LarryM I’ll do some homework tonight

I made a simple pin header, had this 0.1" pin rows in my parts bin, but you could use what you have left over for the grbl header. 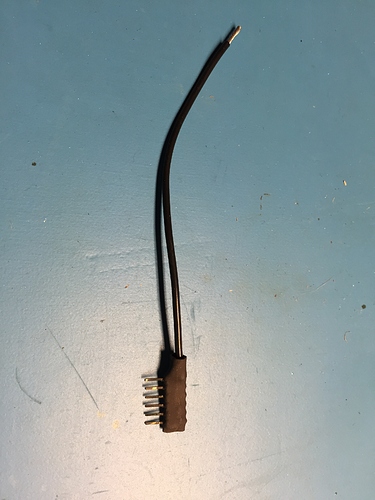 I put the female end on both ends of the black and white, have not had any issues with false or missed home triggers, I used the drain wire in the motor wires and grounded everything back to the PSU, I think that helps. Still have to organize the wires better! 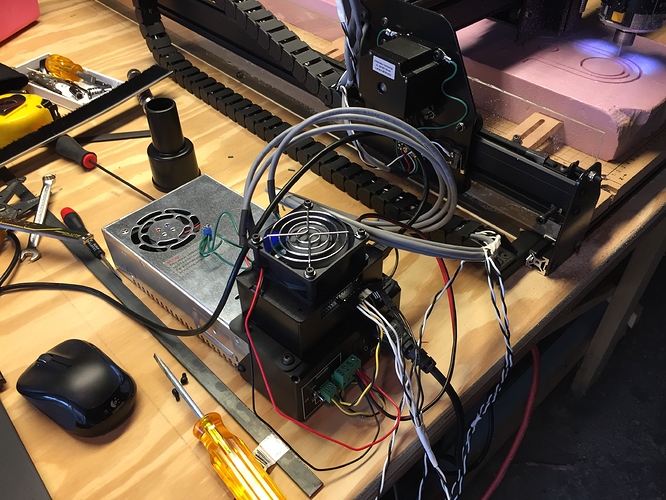 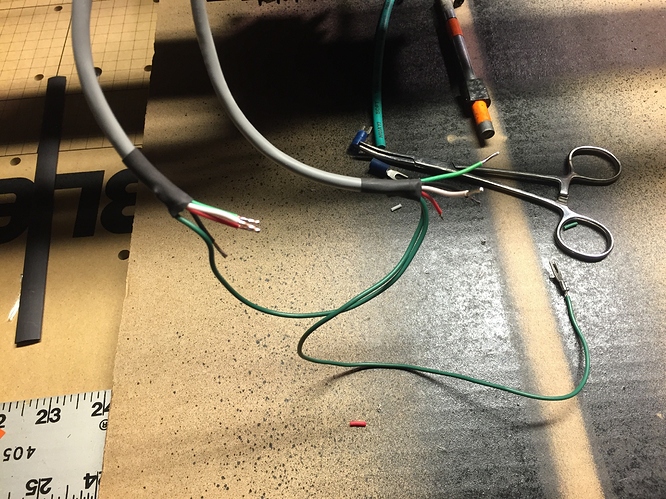