I was experimenting with a diamond drag bit on my X-Carve and got the idea of using the Easel Pro parallel tool path to shade in a filled object. Things I noticed: 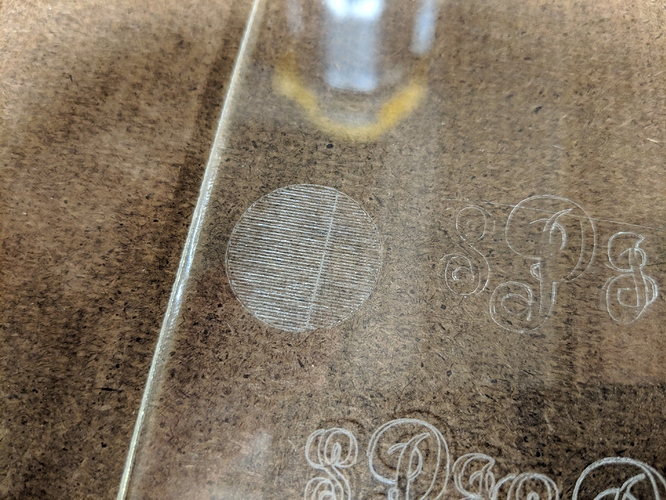 Can you try changing the safety cut height ? You would have to go higher than the spring forces the knife down if that makes sense.I think that might work.

yeah, feasible in F360. unsure on Easel, but you’d adjust your height offsets. you could ramp up your speeds to compensate for the extra movement to keep the speed.

Not sure I’ll get to play more before the weekend. I didn’t see the bit lift at all during that travel move so I’m not sure changing the safety height will make a difference if the gcode generator thinks it can keep the bit down.

I was really playing with the drag bit to see if my recent Z axis upgrade would make a difference with the wiggle problem I had the last time I tried to engrave a monogram - turns out it made a big difference and looks pretty good now. For that test case I had created the monogram as an SVG and was using Easel to carve/etch it. While I was doing that I got a sudden urge to etch a Death Star (admit it, it’s happened to you) so I tried the Easel Pro parallel path thing and figured I’d document the results here in case anyone was interested.

Hi. i know it’s been a while but I am trying to do a similar thing and encountered the same issue at the end of the fill with the diamond dragging accros the shape. Have you found a solution? thanks

Sorry no, haven’t played with it since and don’t use Easel much anymore.

ok thank for getting back to me. I’ll keep experimenting.