I want to interlock it for portability so it fits in my tackle box. It should fit tight together and not pull apart without glue. Attached is a picture the top is the current jig I have that is too small. On the bottom is the longer one I want to make that assembles. It’s 3/4 hdpe for water resistance. It’s a jig to hold fishing line while tying knots. 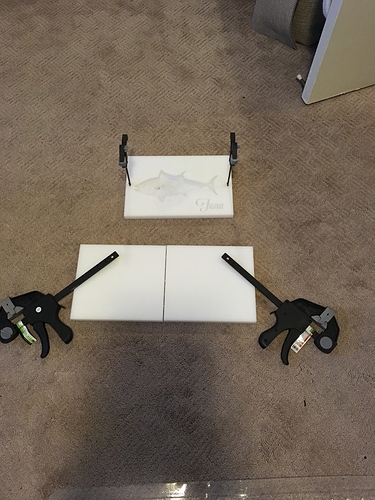 Thanks for that tidbit, it was really helpful.

Now I managed to import and layout a double lapped dovetail. I am stuck now trying to make the fill cut halfway into my stock to create the female dovetails. I have 4 cuts and not able to combine the cuts to enable a fill checkbox. 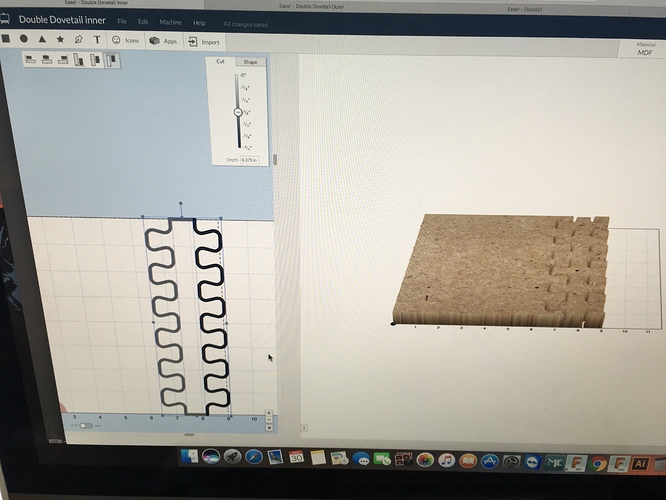 If I have understood this correctly you can achieve this simply by:

I would do a test cut of the dove tail design to nail down the tightness.

I seriously considered a brass piano hinge which would discolor after a while in saltwater, I think a SS hinge would would be too expensive. I figured I could play with my Carvey more doing dovetails.

Although if I can’t get good test cuts brass hinge here I come.

I don’t know how to make a c channel on end with a Carvey, as far as I know we can’t run undercutting bits and I can’t stand the stock on end in the machine. I could just buy a handheld router with a bit though.

So I used the pen tool and drew a rectangle and connected the dovetails. (I wish easel could add points to an existing object and snap to existing edit points). Then I drew another rectangle in the same place as the fill command was missing the middle. Then I combined the cuts and used a fill command for .375 depth. ( my stock is .75). I also had a copy of the male dove tail cut that I overlaid at .75 depth of cut. I did bunch of test cuts. No matter what outline I chose for the dovetails on the left (inner,on path, outer). They would cut the same size even though the size changed on screen. The through cut on the right .75 depth doesn’t have a outline option. Also a weird cam issue was happening where small triangles would be left uncut and another pass would come by and ram into it, trying different options of which layer to send to back didn’t help. I think with the 1/8 bit and Mdf that wasn’t a problem, but with my finish stock that would break the bit.

So I got stuck again as the female dovetails were too large or males too small. So then I changed to a two stage cut, 1/8 for roughing and 1/16 for detail which fortunately chose my through cut, so with less kerf I hope those dove tails on the right get bigger.

I wish I could be calculate the fit and kerf, but with the outline not working I’m stuck. I think if this current cut doesn’t work I either have to go all in and redraw this from scratch in Easel eye balling edit points as best I can or go to a lapped brass hinge. 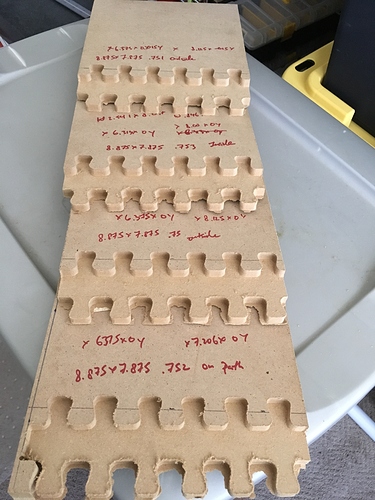 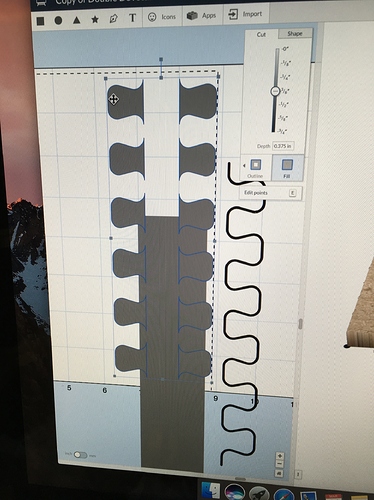 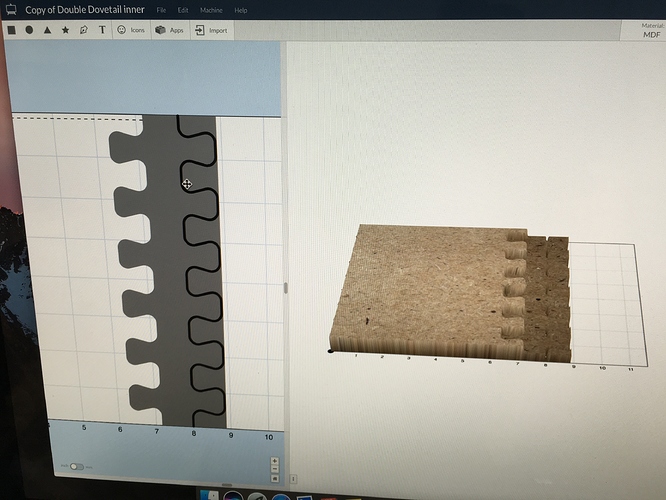 If I leave it an open shape, I won’t be able to use the fill command?

“You need to give your pocket cuts room for the bit to travel past the desired cut so that the bit will full cut. It will not go in areas of the pocket it can’t fit.”
I don’t understand, you mean the radius of the dovetails are too sharp and the points are too close together that a outline path command won’t compute because the drawing points are too close together? See picture below.
or you mean if the cutting stock is 8" high for a 1/8" bit I can’t cut from -1/16" to 8 1/16" to complete the cut to the edges of the stock? Looking at your example I think the latter is what you mean. Currently I have the stock at 7 7/8 and the cut set to 8" I align the stock between the waste board layout lines and i get flush cuts end to end. on my final cut the stock is 8" I was thinking i could file down the 1/16" left over on each edge.

change the listed bit size, but leave the bit size in the machine? so I would need to change the step over percentage or slow the feed down to compensate? wouldn’t this still cut the same inside path line?

This a picture of the many edit points I inherited after the combine command. You mean the points are jamming together preventing an outline option from working? 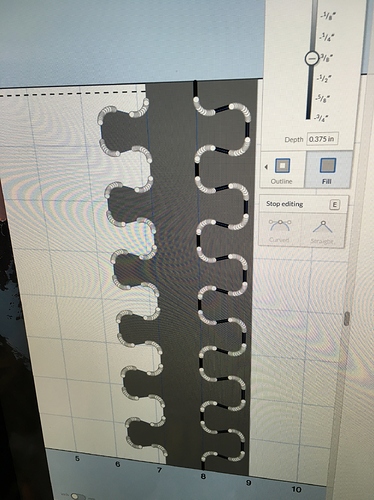 This is a picture after importing svg many fewer edit points. 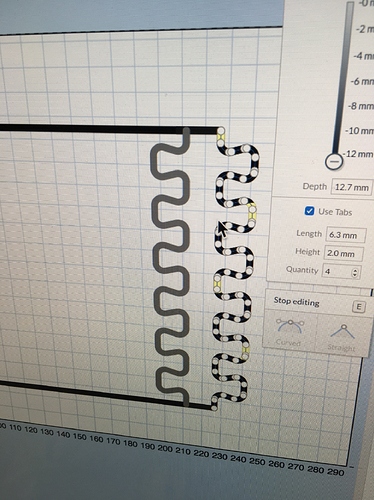 if I don’t close the shape I can’t use the fill command, otherwise how do I pocket the dovetails? 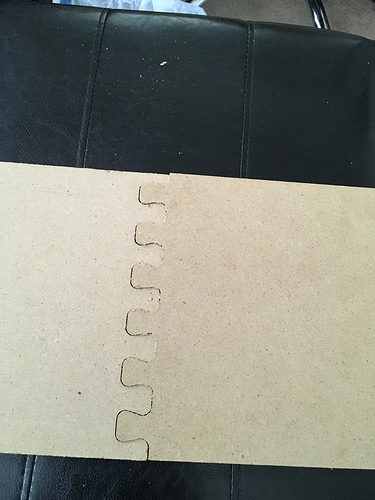 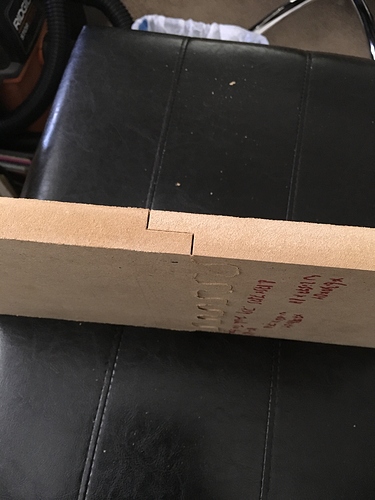 Got it nice and tight, tomorrow I try on the finish pieces. 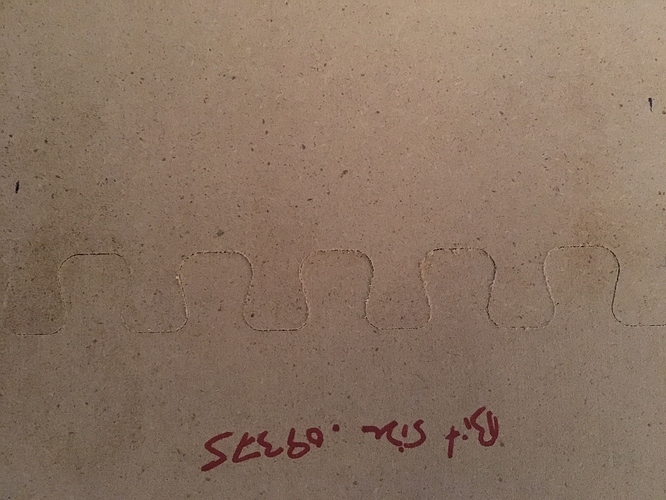 Looks neat. I found this website to be very informative http://mkmra2.blogspot.co.nz/2014/08/cnc-cut-wood-joinery.html

Project completed! Just need to personalize it. Thanks everyone! 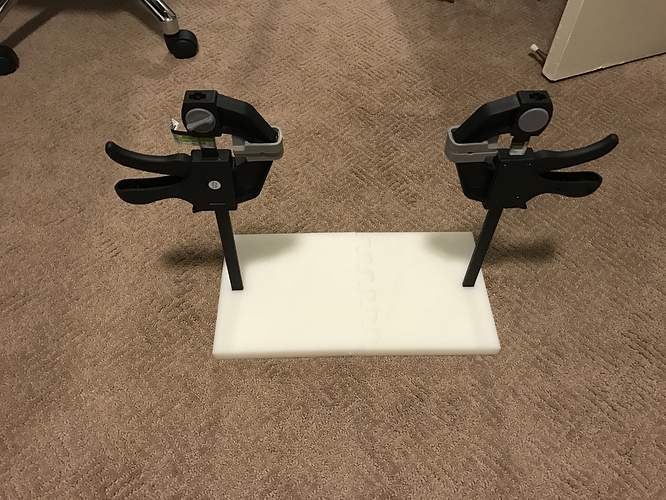 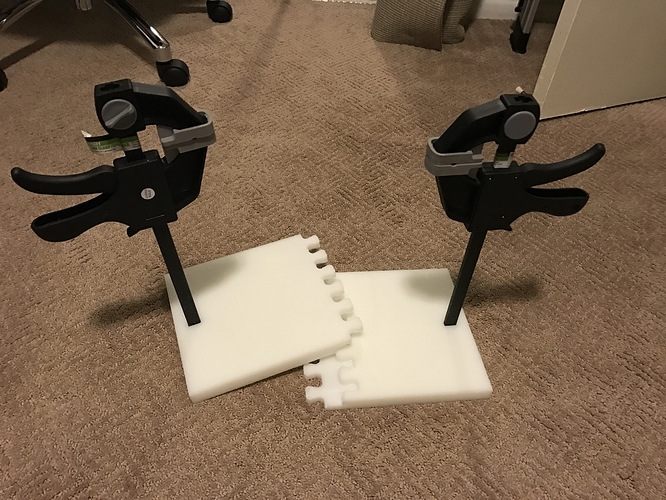 I cut an extension leaf to increase the working area.

When you splice leader into hollow line you need to tie nail knots or serve the connection. People do the same thing with archery bow strings. 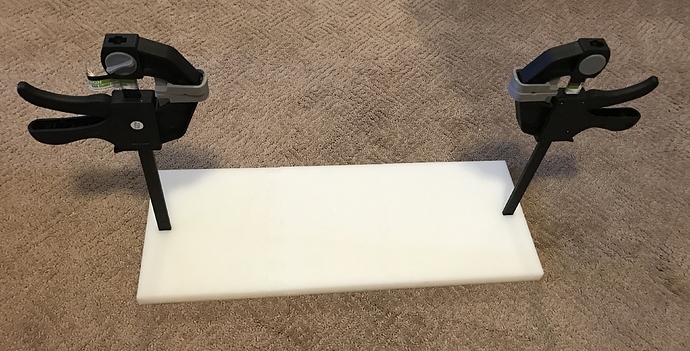 That’s a pretty cool setup some and some serious line !!!