Does this type of carve use one design file or do you need to set up a second file?

I’ve done quite a bit of 2-stage carving in the past on my X-Carve, no real issues. The other day I did a carve and the detail pass ruined the project when it cut through a section of the piece which wasn’t supposed to be cut. Thought it may have been a fluke or something loose, but it happened exactly the same two more times so I had to figure out another solution.

Two stage carving is cool but has some issues. The rough cut works great but the detail cut cuts a deeper outline around the whole image. So this is not working for me. Any suggestions?

Would you be willing to share the project and provide more info about what part of the piece cut that wasn’t supposed to?

I use probe and probed at the start of the first cut and again after I changed to detail bit.

I started with a 1/8 bit for rough cut and a 1.6mm bit for detail. I use z probe and probed at the start of the rough cut and again after changing to detail bit. Image of my project is below. Any ideas how I can fix this for future cuts? 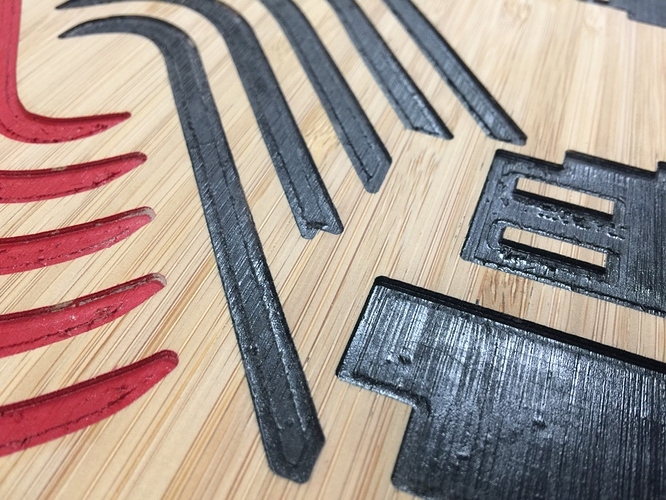 Admittingly, when i punched in .002 in jumped to IN instead of MM… but i just click on MM and hit enter…

Well this was my 2nd attempt. First attempt seems the detail cut was cutting to low and I got confused by the menus. Seems if you do a 2 stage cut it would be more intuitive to have it all in 1 wizard. Hit carve, notify put in 1st bit, complete the wizard to start cut. Once complete notify for 2nd bit, complete wizard and do 2nd cut. Anyways off that soap box for now. My 2nd attempt not that I know how it works it again cut slightly to deep but worst of all(see the pic). It is leaving material in some places and not others. Yes I selected the same bits I actually used before anyone asks. If I didn’t this would be a issue around the whole parameter. 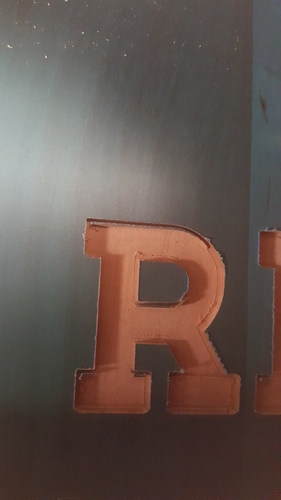 I like it and it is easy to use. The problem is that the detail pass did not cut the same depth. I used the probe for both cuts, the rough and detail in the exact same place. It cut approximately 1/32" higher around all the letters. This was my first attempt using. I have not had the opportunity to test another project. Also I had the split the texts into two separate carves. In addition the cut path showed properly in red in the simulation however there were three paths that were in blue which resulted in cutting through letters that were not part of the carve. Hop this feedback helps
Here is the photo of the project 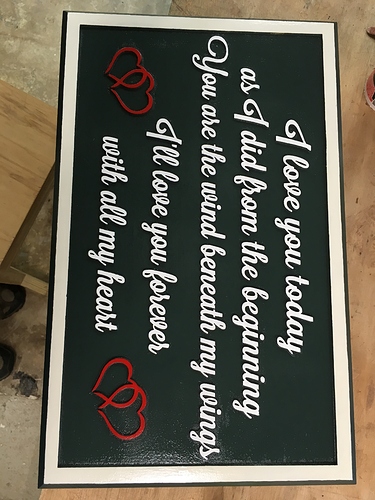 That material being left could be a few different issues:

I recommend always resetting your X, Y and Z positions between cuts. I use a three axis block to do that. It adds like 30 seconds for me but it eliminates this problem. I also eliminated it by not taking the work piece off between the roughing and detail passes.

The board was not moved. The x/y is dead on. The z axis is the problem in that the detail path is about 1/32 shallower than the rough cut. I used the probe in the exact same position as well. Those are variables at can be taken out of the equation

Yes the probe was put in the exact place. I agree the wood will vary in thickness. Don’t know about the g code but I did verify the thickness in easel being the same in the rough pass and the detail pass

I wasn’t replying to you. I was replying to @AndrewTilson because his problem is different than yours.

Where in easel can you see the g code?

I did not move the board or the home location. I couldn’t get the zprobe to work the first time i had tried a 2 stage carve so this was my 2nd attempt at a two stage carve and so i did a manual home. All i did between carves was raise Z so i could change bits and then lower it down till it pinched a piece of paper. This was the same method for the rough cut. I have not yet tested if my z is calibrated correct yet but i recently got a dial gauge i can use to check this.I can check that and share details tomorrow but that will only deal with the depth of the detail cut issue not the it being off. It makes sense if perhaps it Y axis got moved slightly + that this could have caused the issue but at the same time it was not consistent like this across the top half of everything although it was only the top half of stuff that had this issue. It was probably a 50/50 on top surfaces that it left this material behind. I have calibrated my X and Y already just not my Z.

Check your bit cut diameter then. Easel will do the code as if it is exactly what you tell it is and if its smaller, on a pocket cut like that, you’ll have a small sliver of material.