Well I finally pulled the pin and ordered VCarve Pro yesterday, from inventables. Now I just have to wait for the USB stick to arrive.
While waiting, I figured I would play around with UGS in preparation. I am very new to the CNC world, but feel that i pick up things fast.

Which version would you guys recommend. If its important, I do plan on doing actual 3D carving.

I understand that the classic is stable, and less likely to give me issues. But Platform seems to be quite a bit dfferent. Since for me, I am completely learning to use new softwar, it seems redundant to learn an older version then relearn the newer. If I go with Platform, what build would you recommend, to give the fewest issues out of the gate.

I prefer the nightly Platform build.

The interface is awesome and the recently redone DRO is nice.

I used the setup wizard, set to the same setting for my controler, as from the device manager.

It says connecting, then it says the setup wizard is not supported for this controller. 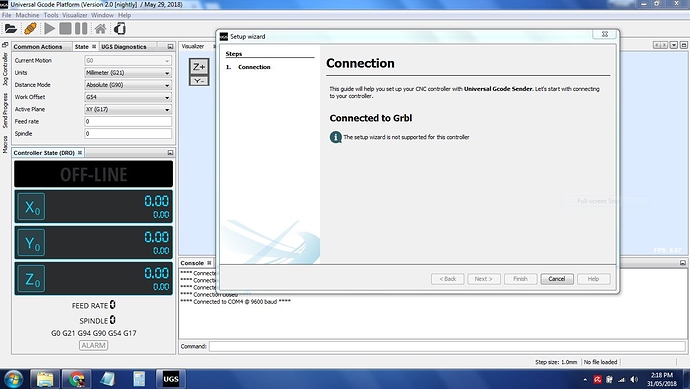 Another little tidbit.
While it says its connected, I just tried to send a $H command in the consonle.
It comes up with an Error “Grbl is not finished booting.”

I don’t think that is the correct bad rate.

That is the baud rate in my device manager, that easel has been working with no problem.

Ok so here’s the problem.

Device manager is just the default setting. Every program (Easel, UGS, etc) sets the port itself to the configured speed.

Doing it in Windows will accomplish nothing. Easel, in the background without you knowing, is setting the port speed to what it needs.

I tried to run the classic and got it to work. It chose the 115200 setting itself and worked fine.

I went back to the platform version. Clicked the connect button, Not the Setup Wizard, it set 115200 on its own, and I now have control of the machine.
I don’t know what the Setup Wizard is for, but it just confused me.
This is going to be a little learning curve.

The macro feature is great for quick and easy Z probing or G28/G30 moves.

I like the flexibility of the window, being able to move each piece around how I like it.

He has some built in probing tools…I’ve never used them.

Just know, it’s not as “fool proof” as Easel so mistakes may get amplified. The biggest one is you need to learn about setting your X/Y/Z zero before carving.

Sorry to hear that the setup wizard was confusing. It’s pretty much brand new and we haven’t gotten much feedback about it yet. What version of GRBL are you using?

What is weird, is that I just went back in and clicked setup wizard, and it worked. I have no idea why it didn’t work before.

One question, though. If I already calibrated my machine in Easel, do I have to do it again in UGS?

Thanks for the feedback, I think I know the problem and should be able to fix it. In your case I don’t think you need to worry about the setup wizard, it’s for setting up your controller which has already been calibrated for you.

I’m working on a sort of “welcome page” that should hopefully make the new user experience a bit more pleasant in the future.

Another quicky, Is there a place that describes how the probe module works.

I just gave it a shot, and it went in the wrong direction. When I use the jog controls, both X and Y move away from home when I press +. The Z however moves toward the homeswitch when I press +.
Everything works fine in Easel

If I change this in UGS, will I have to change it back again if I use Easel?

It sounds like your X/Y motors might be mis-wired. You can play around with the configuration wizard to test/fix this, but Easel might change it back. Have you carved text with your machine?

Which direction should it move with the +.
I have been carving with Easel for a few months. I am trying to learn UGS, as I just purchased VCarve Pro (waiting backorder form inventables).

I know Easel made similar corrections when I set it up. If I am going to be playing with new software, should I go back and rewire the motors to a standard, proper configuration?

It should move X to the right and Y to the rear. The configuration wizard may have cleared out your setting, it is supposed to check the existing value first.

If you’re able to configure the machine correctly in Easel it should work fine. So there’s no need to rewire your machine. But personally, the pedant in me would insist the wiring be changed

I also notice when I first entered the Set up Wizard, that the Y and Z motor were already marked to reverse direction. I am assuming the wires are backwards, and Easel already set them.

Somehow, while checking out the Setup Wizard, I unchecked the reverse box on the Z, without completing the wizard. Now I can’t Home, because the Z is traveling in the wrong direction.

I am going to try the wizard, but I will use the calculations I already have for the steppers.

I think, next week, I will rewire everything to a proper standard. I am going to have a few weeks before VCarve, because of the back order.

I went through the setup wizard and it seemed to work. However, I still can’t probe, because the Z travels the wrong direction. All of the jogging buttons and homing works. I think the only fix for this will be rewiring the stepper properly.

Have to break for now, its supper time and I’m on BBQ duty. I will get back to this tommorrow.

If I already calibrated my machine in Easel, do I have to do it again in UGS?

No, those are GRBL variables and stay unchanged.

The Z however moves toward the homeswitch when I press +.

That is correct. Since we deal with negative space, doing a Z+ will move the Z up. Z- should move it down.

I am assuming the wires are backwards, and Easel already set them.

What I recommend doing is going back through Easel setup, let it change the directions for you, then going back to UGS and ignore the setup wizard.

You don’t have to rewire (stupid phone autocorrect). That’s what the $3 GRBL setting is for