I recently purchased a riser/stiffener kit from tbdcnc, and their Supergrade z axis kit (with 15mm pulleys and belt). I also have a j-tech 7w laser kit. Now that Fall is here in New England and work is slowing down, I’m hoping to put a weekend aside to install both upgrades.

Seeing as how Luke doesn’t answer his phone or return emails, I’m hoping some of you with tbd mods can give me some advice. I found by searching the forums here the info on GRBL settings changes. Thanks for that.

Thanks in advance. You folks never disappoint. Cheers.

Hello. I only recently started my assembly but my machine is about two years old. I tried various pullers but never could get the pulleys off without feeling like I was about to over-torque something behind/below it. I tried heating the pulley with a soldering iron to no gains.

I cut a set of jaws for the shaft to sit just behind the pulley; then I milled them off. I’ll use the same jaws to “flat-spot” the shafts for the set screws. Good luck! 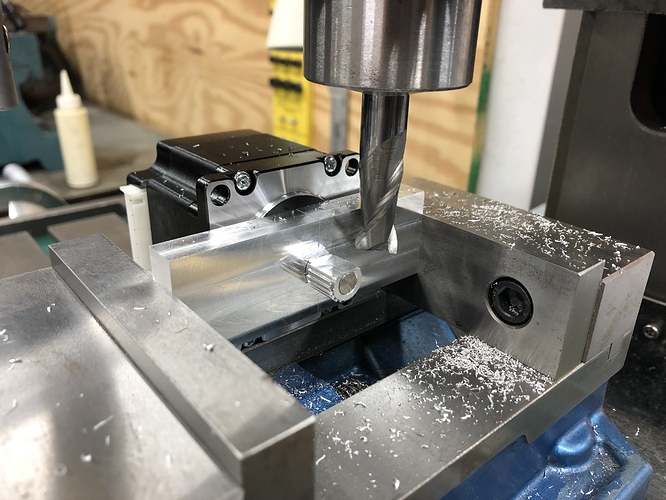 I just emailed Luke AGAIN. This has been the worst experience with my machine yet.

I also wanted to upgrade to Lukes best but no replies as you said. Very frustrating… and I have found the same with cnc4newbi. Is there any other companies that have upgrades that you know of?

I have not upgraded my stuff yet, but have purchased my upgrades through TBDCNC, so I can not speak on behalf of the actual upgrades yet. I do know that he is very busy and behind on his orders and it takes time to get emails back from him. There were some complications with my order and it would generally take 2-3 days before I heard back from him.

Still no response from Luke. I just sent another email asking if he’ll take the stuff back. If this isn’t resolved by the end of the week, I’ll post the stuff here for sale (cheap) and explore my options going forward.

Any guidance you guys can provide on how I adjust my Z axis settings after switching to the 15mm pulleys?

You have to change the $102 number which is steps / mm. Basically I used some math. I work in inches and use UGS. UGS has a jog feature where one keystroke moves it either an inch or mm depending on how you set it. I measure a cut from one keystroke. Then compare that measurement to what I want. It’ll be a ratio. Then you mulitiply the resultant number by the number that you have set for $102. To change that number in the command line you type $102= whatever number you decide it should be from the math and enter. The setting should now be the new number.

Any guidance you guys can provide on how I adjust my Z axis settings after switching to the 15mm pulleys?

Pulley size won’t matter…they’re still one to one ratio.

I went to his site to see if I could find specs on the acme screw, so I could help you calculate the steps/mm. I didn’t find that, but I did find this:

The pics on the product page show the whole thing mounted to the X-Carve.

Thanks Neil. I falsely assumed that the pulleys would be my greatest headache. I was able to get the pulley off my old stepper easier than I thought with a SMALL amount of heat and a pulley puller. Have a great day.

I purchased stuff from Luke and it worked okay. Read on this blog that he had moved and lost his helper and that there were some medical issues with his family. Still would be nice if he contacted you.

For Z: you need to change to about 50. To determine exact amount, put a piece of blue tape on Z and mark where it is. Then, jog to a new position and read delta Z. Knowing the delta and the jog and using Luke’s calculator, you can determine exact new Z. Worked fine for me.

So, still no word from Luke. I am gonna wing it.

I’m starting with the stiffeners. As my machine sits, it is square, and METICULOUSLY adjusted dimensionally all the way around. The stiffeners are supposed to go between the wasteboard and side rails. As my machine sits, even after trimming the wasteboard a little, if I place the stiffeners onto my lower frame, they would push my rails outward slightly. Because my machine currently runs quietly and without issues, I was contemplating keeping the dimensions between rails the same and sliding the lower frames (below the wasteboard) in. Before deciding, I was curious if any of you had a SPEC width that I should be aiming for on a 1000mm machine. If you can help and provide a measurement, please specify where I am measuring from. Track that guide wheels run on Outside edge to outside edge etc. Thank you in advance.

Next issue. If I narrow the base, the screws that go through the wasteboard are not going to work. UGH

I mounted my stiffeners to some extra plain extrusion I had. I cut notches in my wasteboard to accommodate the left side. I opted for plywood and drilled my own holes for threaded inserts. 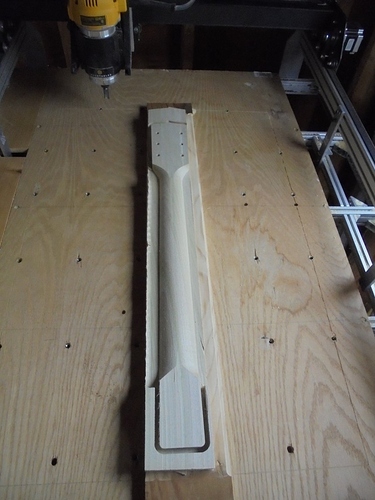 I have been wanting to do some upgrade myself but have not heard back for anybody that I have emailed. I wish Inventables would sell upgrade equipment.
Russell

So, my rails are 3.75mm wider now. Anyone think that’ll be an issue? 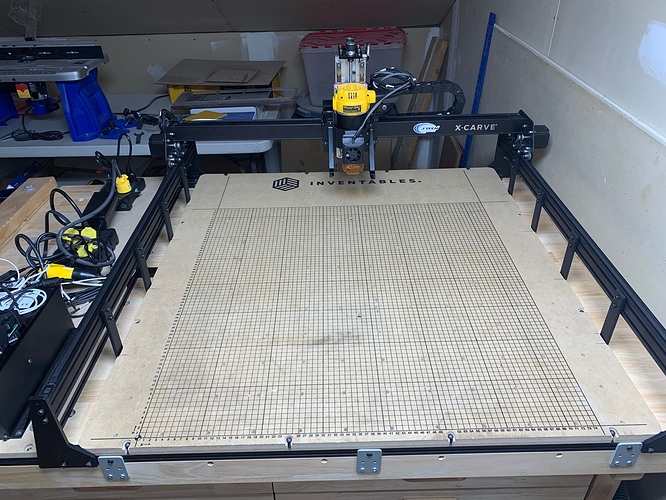