I’ve been upgrading this weekend, adding a diffuser to redirect the downdraft from the DeWalt spindle, t-tracks for the waste-board and improved dust hose management.

The air diffuser delivered a huge improvement to the dust collection, allowing the shop-vac to pick up everything (as far as I could tell). Here are some pictures: 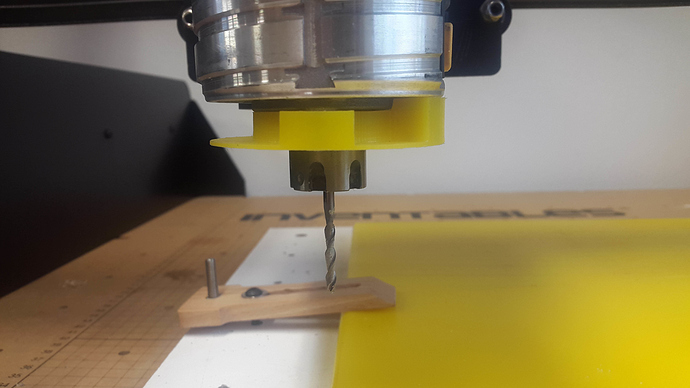 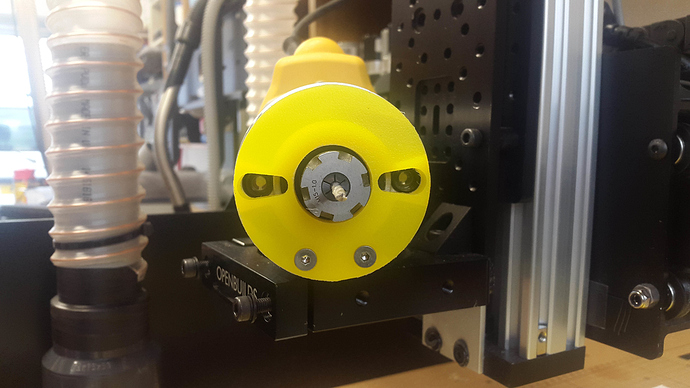 I wanted to put the diffuser to the ultimate test so decided to add t-track to the waste board. MDF is arguably the trickiest material to machine whilst maintaining effective dust collection because the dust can be so fine. Well, I was more than pleased with how the diffuser helped. Here is a short video of the test in progress. You can see from the video (when I move to show the overhang at the front of the waste board) that no MDF dust gets out of the dust shoe:

Here are some pictures of the t-track in place. You can see on the left side of the waste board my initial toolpath/gcode was a little off (by almost 50mm…dohhhh!). Well, it is a waste board after all, so no harm done: 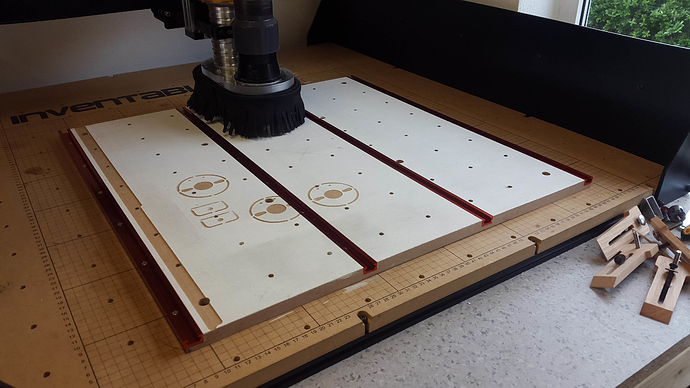 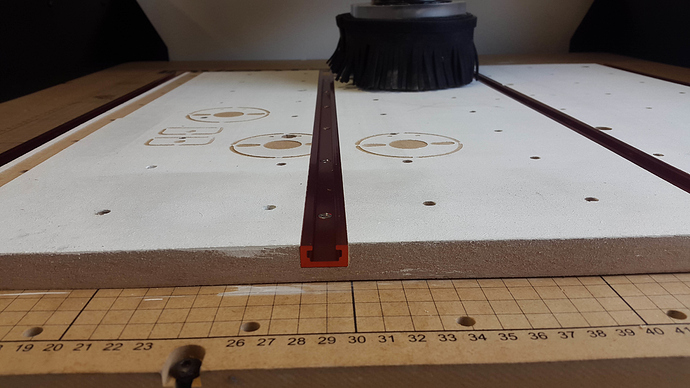 I am halfway through a modification to the dust hose management which will see it run in a tray along the x-axis. The intention is the maintain as low a profile as possible and avoid having to have the dust hose hang from above. I made brackets to hold the 50mm (OD diameter) pipe, and attach it to the linear actuator. Here are some pictures: 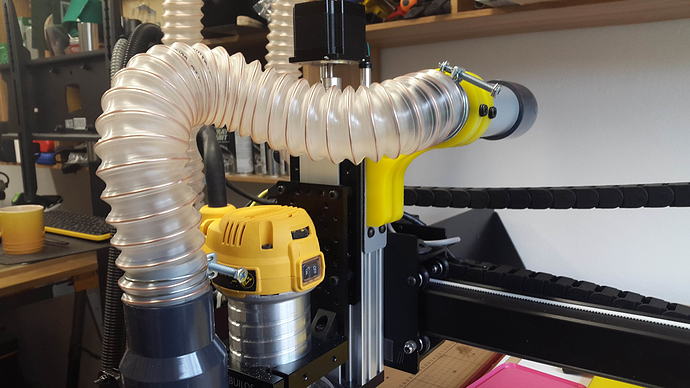 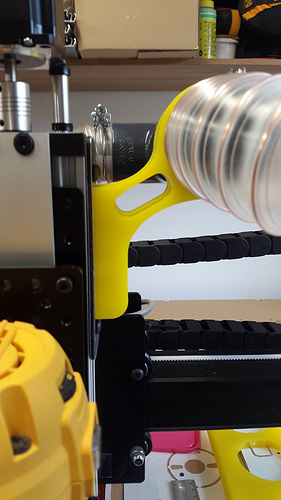 Dust hose management is a work in progress, and I won’t be able to work on it now for a couple of weeks, but I’ll update this post when I do.

Nicely done. However, I’m a bit confused as it looks like your hose from the router is through a connector thru a back board. The hose does not look long enough to travel the entire length of the X Axis.

That is really nice!
Can I ask where you got the diffuser and how does it compare to some of the other ones out there?

Hi, the picture doesn’t do a lot to explain the ‘dust hose tray’ system I’m adding, but the hose is more than long enough for the final design (which is a couple of weeks off completion).

Hi Patrick, I cut it myself from HDPE. I’ve not used one before so can’t compare it to anything but so far I’m very pleased with it’s performance. It’s made a huge improvement overall.

I removed the factory screws which hold the spindle locking mechanism and tapped the holes to take an M4 thread. The screws I used were countersunk 20mm M4 Hex, which worked perfectly with the material I was using, which was 12.7mm in thickness. I modified the dxf file in Adobe Illustrator, then used VCarve to create the tool paths. I have attached the Adobe Illustrator file, my version of the dxf file, the VCarve file and the resulting Gcode…

Hi,
How are you finding the Openbuilds C beam on the Z axis? I’ve had quite a few problems with it and i;ve had to upgrade to the XL size mounting plate to get ride of the vibration. Also the thing is noisy! way louder than the original Z axis.

Hi Alex, I’ve had no problems with it, other than a slight annoyance that one end of the c-beam hadn’t been cut square, which I did think was bad form (not significant enough to impact the performance but disappointing). You’re right, it is noisier than the original. That said, I can’t hear it at all once the spindle and shop-vac are on, each competing to perforate my eardrums.

I thought about the various configurations before purchasing the actuator and settled on using two ‘double c-beam gantry plates’. One is mounted to the actuator according to the instructions, and the other is mounted onto that plate roughly half way down using nylon spacers.

So far it’s working well, but I may thread-lock parts for added security. I have found the bolts for the router mounting kit (pictured below) can work loose through vibration. 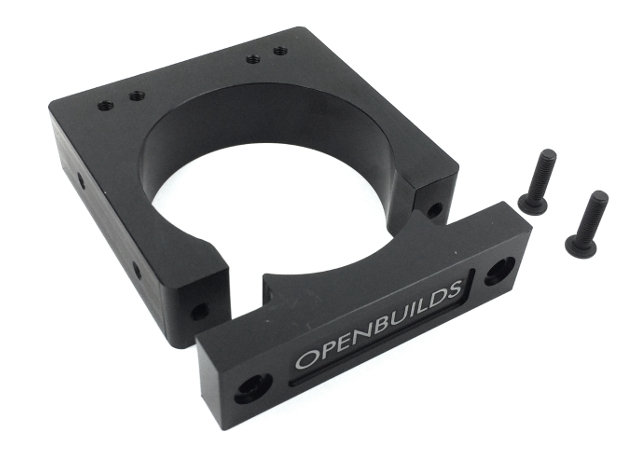 Thread-locking them will make adjusting router height inside the mounting bracket a little more fiddly but it’s rare I’ve need to do that.

I also added some 90 degree brackets to the top of the mounting bracket. My thought was that most stress would come from upward pressure as the spindle cut into and through material. I did that from the start so can’t speak to how it might have performed without, but so far there’s no flex at all and it stays nice and square.

Jon, Thank you very much for sharing the files! I’m surprised it actually helped with the dust collection as I would have expected the air blowing down into the cut would have cleared more.

Hi Patrick, yes I was convinced of that myself but after multiple versions of brush for my Kent CNC dust shoe I was close to throwing in the towel and buying or building a version of the SuckIt shoe in the hope it would deliver the efficiencies I was looking for. The original brush for the Kent CNC shoe was far too stiff. I tried other similar brushes with limited success, cut up several different mouse mats, rubber strips, varying thickness of vinyl and pvc sheet, and most recently craft foam. The latter had good results but I was still getting blowout when the dust shoe came to the edge of the cutting piece.

Before I clicked the ‘buy now’ button for a SuckIt I stumbled on a post in the forums talking about air diffusers (link). I thought I would give it a try and was amazed at the improvement.

I think the fact that the air is still being circulated within the KentCNC shoe helps to make sure dust is kept mobile, but it’s not being blasted directly from above, allowing the shop-vac to collect it. That’s the theory anyway, but either way it seems to be working and I don’t need to buy another shoe. The build quality of the Kent CNC shoe is very, very good and if they ever make a softer or more flexible brush for it I’ll be ordering one.

I am almost done…

I redesigned the z-axis hose bracket and swapped it to the left side of the linear actuator. I began with a 2mm aluminum sheet off-cut, bent the two sides inward, cut the HDPE pipe guides and mounted it. Here are the pictures… 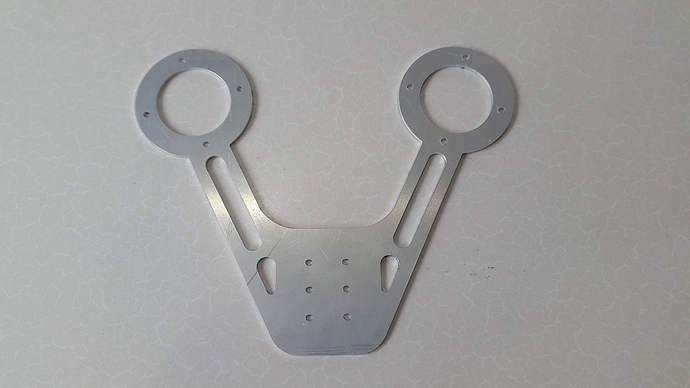 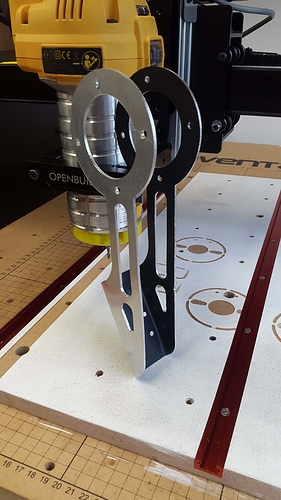 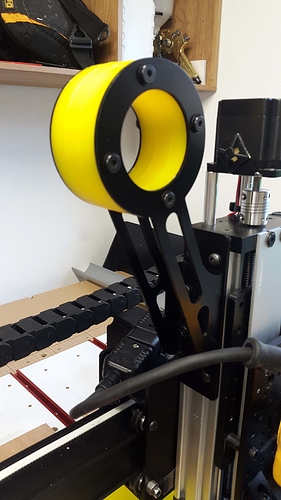 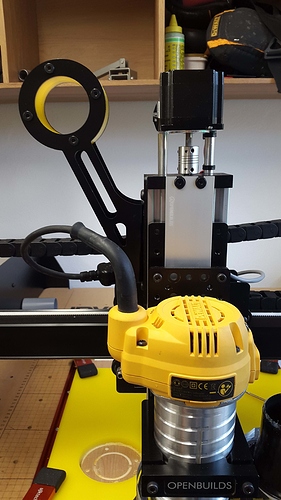 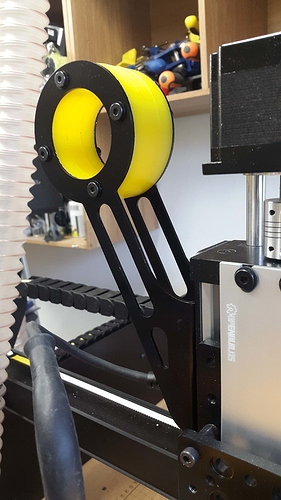 Next I began work on the dust hose tray, which required a support bracket at each end of the x-axis rail. Each side needed to be slightly different; the right side was simply supporting the end of the tray, with the left side needing the support both the other end of the tray and the pipe connectors. 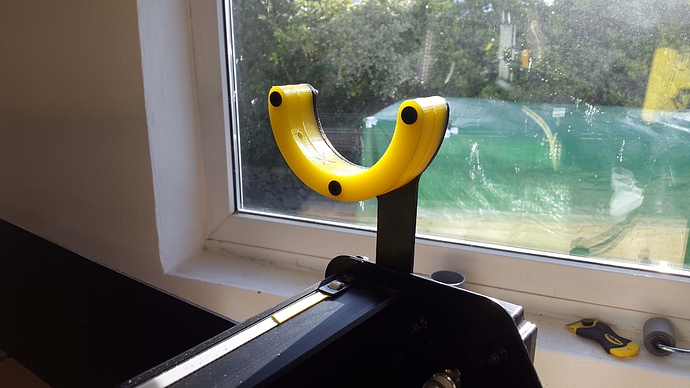 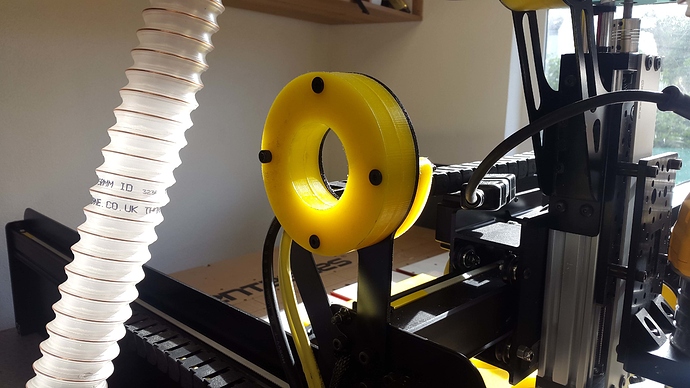 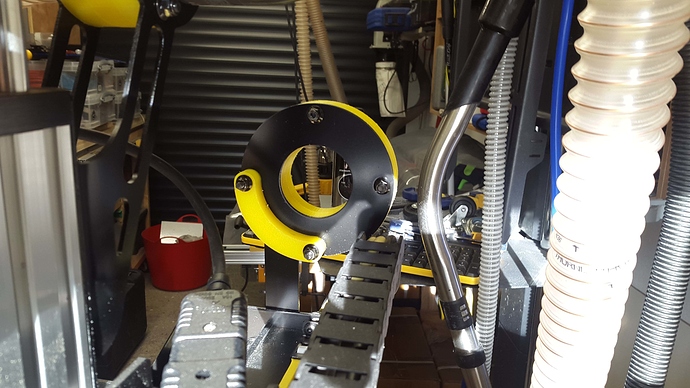 Once fitted with the tray it was time to test it out, which is normally when something breaks, snags or falls off but I was pleased to see it working perfectly. The inspiration came from this YouTube video, I’m quite pleased with my version so far. I’ll work on the tray for the left side y-axis next, but for now here is a short video showing the system in action.

That is a very nice setup for the dust collection!! Are you going to do another tray for the Y axis?

Hi Patrick, yes I will be adding a tray for the y-axis, I’m just not settled on the design yet. It depends on where I mount a custom extractor/cyclone setup (which isn’t finished). It won’t be a great deal different, terminating at the back left side of the machine. From there it will connect to the extractor/cyclone.

I am almost done with the hose management, having setup the side hose to make sure everything fits and moves properly. Next I’ll fit the tray for the hose to run in, dismantle the connectors and bends for painting, then re-fit. I will probably revisit the cyclone/shop-vac placement later in the year but for now it seems to work very well. I’d like things to be a little more compact if I can manage it. Here’s a video of the side hose setup:

I searched everywhere for my rubber bands or zip ties but couldn’t find them so thought sod it, why not over engineer things and see what happens. Nothing like a bit of over the top problem solving to fill a few hours on the weekend!

That is a cool setup, Jon!

Cool setup, do you lose a lot of suction due to all the 90’s?

That is a terrific setup! Thanks for sharing.

Hi Jimmy, no there’s no loss of suction but it was a concern before I started, in fact I think it’s actually better and I have a theory as to why. The setup now uses less internally corrugated tube, joined by lengths of smooth bore straight tube. My theory is that the easier air flow within the smooth bore tube more than compensates for the bends, assuming of course that the internally corrugated tubing inhibits airflow more than smooth bore (which seems a reasonable assumption). I don’t have far to go the reach the cyclone so can’t vouch for the impact of bends over a longer distance.

Now, I imagine someone deep in the weeds of computational fluid dynamics will likely explain that my simple theory isn’t accounting for something or other but it’s working, and very well so far.