'Use Old X/Y' not working on second toolpath (Fusion Post)

I am exporting 2 different 3D tool paths posts out of Fusion 360, including a roughing 3mm step down pass with a flat bit and a finishing pass with a ball nosed bit.

In the past I had this workflow working perfectly: I would import the post, run the first past, load the second post, change the bit, move the head out of the way to probe, then ‘use old’ x/y and it would resume as it should on the finishing pass.

Twice now, this workflow is not working anymore for me. On the second pass after the tool change and selecting ‘use old x/y’, the mill seems to totally miss the mark, thereby losing my investment in the first pass.

Any suggestions on what I may be doing wrong, or any experience with ‘use old x/y’ would be super appreciated.

It’s the post processor for Fusion 360 I downloaded from Easel when I first got I set up.

I don’t have the files handy (at lab at school) but can post them tomorrow.

I suspect that the work zero is not the same for the tool paths in Fusion.

Hey Mark,
the way I got by second set up for the tool path was by copying and pasting the first.set up and deleting the first tool path.
In the past, the same same workflow has worked (I believe).

See attached screenshots for ‘set up’ (stock) and tool paths. Any tips appreciated. 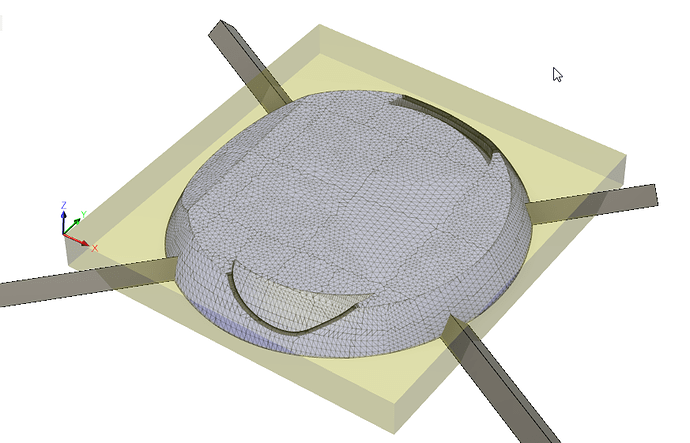 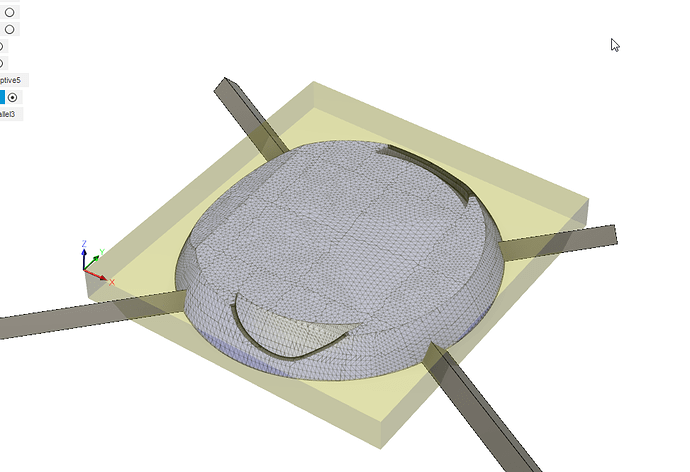 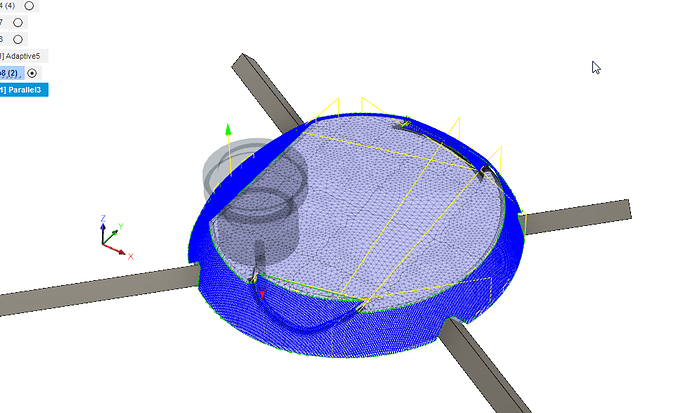 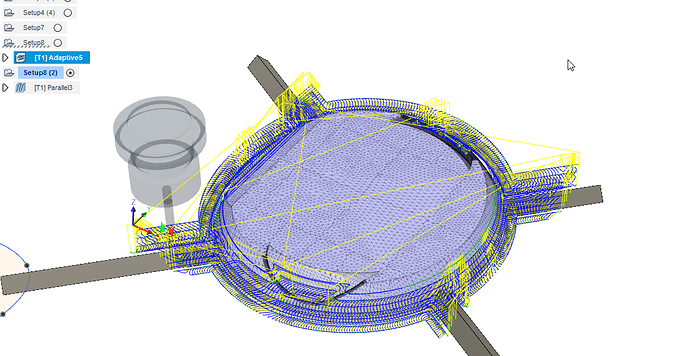 Zeros in your gcode seem fine.
How far off are you?
Are you re-homing the machine between operations? Sounds like you might be moving the machine by hand, inadvertently.

Probably not related, but why not generate both toolpaths under one setup?

In F360 CAM, you should only use one setup for each side of the object to be carved. You can have subfolders and multiple set of tool paths within a setup.

Using multiple setups for the same side of a part make you run the risk of different setups, tool offsets etc which can be confusing. Also any previously carved part won’t be taken into account between setups, only what is inside one setup.

I suspect there is some discrepancy between the setups or a no-good tool path sequence.
Any chance you can share your project?

I´ll be out of town for a couple of days so may not have much time to reply before the weekend.

Neil – the second x/y is waaaay off. Like it will start to cut 500mm away. I’m being really careful to keep the head steady. (p.s not homing machine ever… Just setting x/y from the point it is)

Haldor – The reason I’m using two set ups to export two posts, is because I need a tool change (flat for roughing and ball for finishing). Is it possible to export to a ‘pause > change tool > reprobe > resume’ with only only post? The tutorial I followed (and initially had success with a few months ago said to do this copy / past set up for new tool paths to allow a second and third post for tool changes).

Is it the Fusion 360 file you’d like me to share? No rush and thanks for the help.

You can post each operation separately. You don’t need different setups.
I think the problem is with your process in the tool change and running the next file. Can you describe your procedure?
Go ahead and share the Fusion file if you can.

Hey thanks Neil,
I just tried that (dragging in tool path to first set up) by right clicking on each tool path and exporting to post. That will save me time in the future… I guess we learn strange habits when learning from Youtube

Attached is the Fusion file… Really chaotic, but will give you a sense of what I was exporting (from the last two posts in the list).

I’ll be away from the mill till Monday AM, but if you’re willing to take a look I’d appreciate it.

I don’t see anything in the F360 file at first glance that could cause what you’re seeing.

After you run the first job, do you reset zero?

Does the machine return to you XY zero after the first job?

This is how I would suggest you setup your CAM, one Setup per part you want to make.
Nested within that Setup you place all tool paths required for the part and you can post process them individually / or as a group if you have several paths using the same tool. 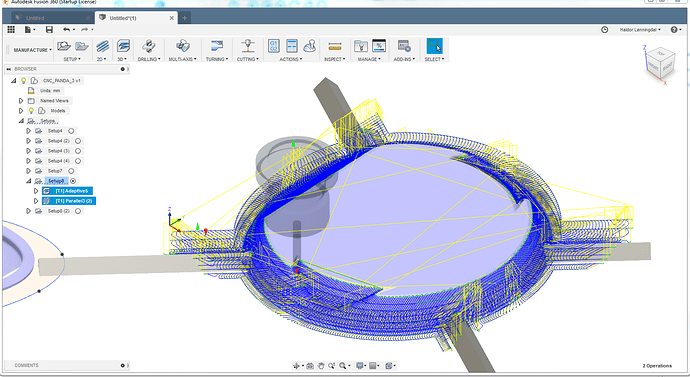 The optimum work flow for CAM on this model - assuming you want to use two particular bits for all parts is to first configure one setup and two operations within that, one for flat/roughing and the other for ball/finish.

I didnt find any obvious suspects as to why it moves to a different place than intended, you could test without the following box checked, Include Setup Model
You dont need to have Rest machining checked either IIRC: 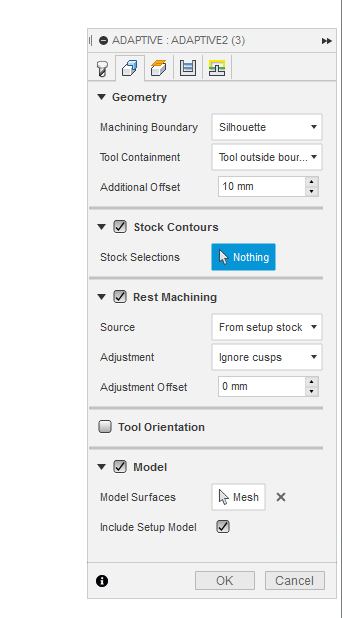 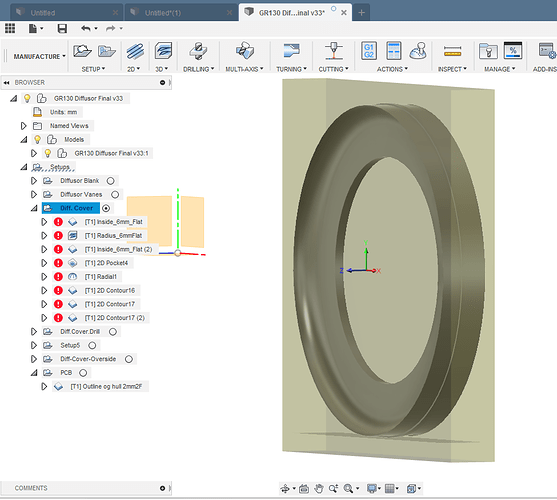 Hi Guys,
Much thanks for taking a look at the file.

@HaldorLonningdal I won’t be at the X-Carve till Monday evening, but will try your suggested settings when I get back to it. I’m pretty new to CNC milling, so those setting suggestions are really helpful.

You kind of read my mind in fact – I was going to ask about how to not do the set ups over and over… Having both paths in a set up, then duplicating the set up for other parts is really helpful Will save me a lot of time as I was doing each one from scratch.

Much thanks and I will report back early next week with my progress.

p.s. @NeilFerreri1 after first job I specifically do not reset the zero, but I will take special note of the beginning point and what it does at the end of the first tool path on Monday.

hey all.
Just wanted to report back good news.

I did follow the suggestions about putting the same tool paths in one set up.
Whether it was that or some other mistake I had made, everything seems to be running smoothly now.

I’m running the finishing pass as I write this and wanted to thank all for feedback and support.
It’s much appreciated and I learned a lot (including a better workflow).

Much thanks to all.